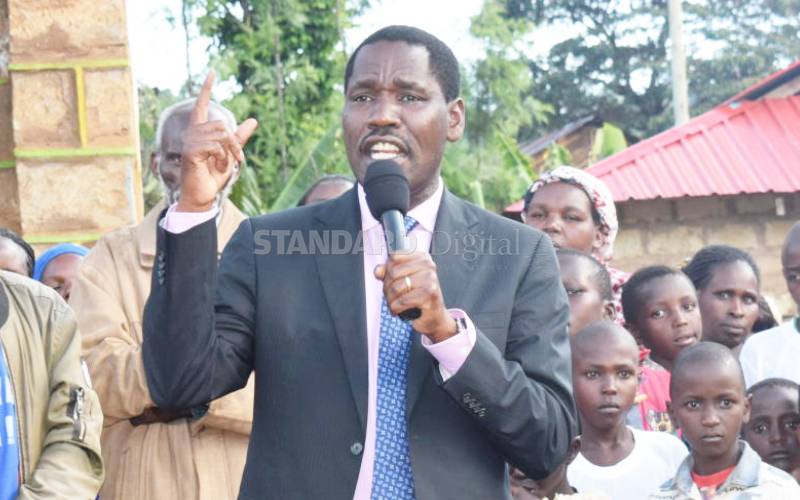 Swarms of locusts in parts of the country are destined to die of old age and are no threat to food security, Agriculture CS Peter Munya (pictured) has said.

Speaking at Gakurune Primary School in Meru after visiting areas where locusts had invaded, Munya said locusts, yellow in colour, will die from age and the cold weather.

“Don’t be worried. They are going to die,” said Munya, who was with Meru Agriculture Director Dionisio Meruaki, Igoji East MCA John Kireria and national and county government officials.

“They are yellow in color. It means they are old locusts. They cannot harm crops. There main concern now is looking for a place to lay their eggs."

Munya said if the locusts do not find a place to lay the eggs on the ground they would lay them on trees, where they would not survive.

“They are many, they have painted the trees yellow, even the trees are sagging under the weight,” Kireria said.

He said the ministry had deployed personnel with chemicals to spray the locusts.

Munya asked the worried farming community not to worry about the locusts.

The ministry had trained youth in 21 counties to spray the locusts.

Munya said the swarms have moved from Garissa into Mitunguu and settled in Igoji East.

The CS said the locusts were not feeding much as their only aim was to lay eggs.

Munya said the locusts are food and anybody able to trap them was welcome to eat them.

“The only problem is we have sprayed them. They were sprayed at Tseikuru (Kitui). The best thing is to let them die."

Munya said according to experts, the locusts should be left undisturbed by residents.

He said the locusts’ eggs would also be sprayed.

Munya said so far 500 people have been trained in the affected counties to deal with the locust threat.

South Imenti MP Kathuri Murungi said he is collaborating with the ministry to fight the locusts.

Woman nabbed while attempting to sell child for Sh60,000

Woman nabbed while attempting to sell child for Sh60,000