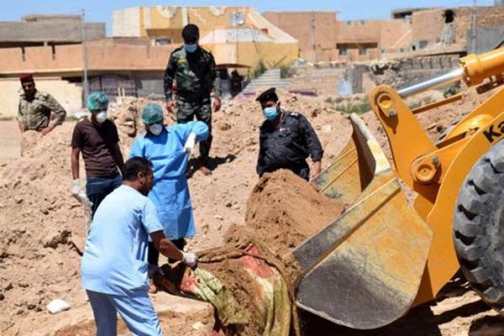 Syria:  The dead bodies of dozens of women and children slaughtered by ISIS thugs have been unearthed at two mass graves in an Iraq football stadium.

The chilling discovery was made by Iraqi cops who were led to the graves by captured Islamic State militants.

They found at least 40 bodies, among them women and children and men in civilian clothes, at the 40,000 capacity Al Ramadi Stadium in the western city of Ramadi.

Officials believe Islamic State militants used the stadium as a mass graveyard to dump their slaughtered victims during their reign of terror in the city.

The Iraq-US coalition suffered a major blow last May after Ramadi, the provincial capital of Anbar, was captured by Islamic State.

But following the city's liberation last December, the barbarism of Sunni terrorist group's brutal regime is only just coming to light.

In territories formerly under Islamic State rule, the discovery of mass graves has not been uncommon.

In June 2014, some 1,700 Iraqi soldiers were captured and then killed by Islamic State militants when they overran Saddam Hussein’s hometown of Tikrit.

At the time, the soldiers were trying to flee from Camp Speicher, a nearby army base where they were deployed.

Mass graves with hundreds of Iraqi soldiers’ bodies were later found after the city was liberated in April 2015.

In December, the U.N. human rights office in Iraq said it received reports of 16 mass graves discovered near the town of Sinjar after it was liberated from the Islamic State group the previous month.

Among the first mass graves uncovered in Sinjar — within days of Islamic State forces being pushed out of the town — was one near the town’s centre.

It was estimated to contain the bodies of 78 elderly women.

Another, about 10 miles outside of Sinjar, contained between 50 and 60 bodies of men, women and children.

The term "mass grave" is used by the U.N. to refer to a location where three or more murdered civilian victims are buried.