I caught my beautiful young wife in bed with a security guard, what should I do? 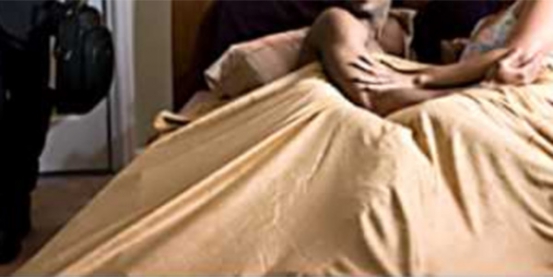 My wife is 10 years younger than I am. I currently work long hours and I’m on the road a lot.

The other day I finished early and came home to find her in bed with a security guard I know.

When I questioned her about it she claimed she did it because I can’t perform in the bedroom.

I was deeply upset and that night I got arrested for been drunk and disorderly.

She’s since asked if I’d like an open relationship, but I’m not into that. I’ve asked work colleagues what they would do and they have been no help at all.

I do love her – I’m home every night cooking her tea – but she has also been violent in the past and I’ve forgiven her.

We’re going through a particularly hard time at the moment – her son got a girl pregnant so all our spare money is going on prams, baby clothes and so on.

To top it off, she wants her son and his girlfriend to move back home with us!

Do you have any advice for me? You’re my last hope.

Yes, I can give advice but I’m not your last hope – you are.

You’re the only one who can change things and I think, deep down, you know what you have to do.

I’m probably going to give you the same advice your workmates did. Do they think you’re being a mug? I thought so. But I get it because you love her.

The fact she’s suggesting an open relationship means she isn’t committed to you as a couple.

And she not only cheated on you but was brazen enough to lay the blame at your door for being rubbish in bed!

That is not true – she’s trying to absolve herself of any guilt.

What I know is this, if you don’t break away soon you’ll have no self-esteem left and it’ll get harder and harder to leave.

She makes no contribution to your relationship and you also say she’s been violent.

What’s to stop her from behaving like that again when things don’t go her way?

Ask yourself: if you don’t leave her, what’s the alternative?

If you think she’s capable of changing and understanding what she’s doing wrong, then give it a shot.

But don’t hang on to her just because you think you’re lucky to have her as she’s 10 years younger.

She’s the one who’s lucky to have you – a caring and giving man.

If you stay with her, I worry it would be a question of putting up or shutting up – and that’s no life.