Sex on the street: Mum-of-two working as a prostitute talks about her day to day challenges 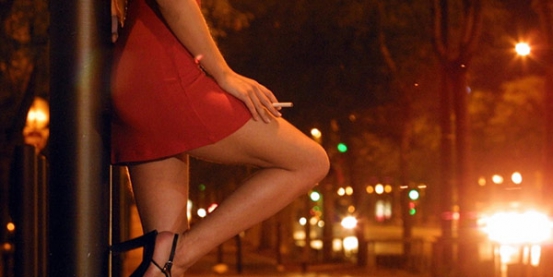 It's been refereed to as the world's oldest profession and as long as sex has been for sale it's often come with exploitation and violence.

Today drugs are often part of the destructive circle of prostitution and the problem of how to make the sex industry as safe as possible is constantly being grappled with.

For the last year in the Holbeck are of Leeds what is thought to be the country's first managed red-light district has been in operation.

The scheme - which is being considered by other local authorities - allows women to work in certain areas without fear of arrest within designated hours as long as they abide by certain rules.

Women were not born to be men's punchbags

Yet three weeks after the trial zone was made permanent 21-year-old prostitute Daria Pionko was killed and questions surfaced about just how successful the scheme is.

The Daily Mirror spent the night there and found an unsettling environment where mothers can drop in to easily sell sex to make ends meet at home.

The first thing that strikes you driving around the Holbeck region of the West Yorkshire city is how small it is.

Found on the Southern edge of the city centre, the smattering of streets lead to, mostly, businesses and industrial units.

Nearby there are signs of gentrification - smart gastro-pubs, a micro brewery and high end office space – but the streets and cul-de-sacs that make up the red light area, while busy during the day, would not be an area most would walk at night.

On a rainy, cold Wednesday business isn't booming but still the streets are busy with women waiting for the regular clients - usually passing in cars - and looking for new business.

The zone operates from 7pm-7am and at first the sex workers can be hard to see until you notice the tell tale signs of women standing alone or in pairs outside despite the bitter cold.

Kirsty and Catherine could both be found near the cash machine at the top of one of the roads, both dressed in black and wrapped up for warmth.

A trio of younger, swarthier, women, who claimed to be from Hungary stood under a bridge, switching sides of the road on occasion to watch traffic pass and speak into the window of pausing cars.

Although they couldn't speak very good English one of them indicated they knew each other and that they were watching out fort each other.

The “trade” itself is almost inperceptible unless you watch carefully

One minute a girl would appear to be standing by a a set of railings or leaning by a wall, then they would move around a corner and they would be gone.

Some didn't appear for the rest of the night and some turned up walking the same stretch of pavement a few hours later.

The same cars could be seen circling the same loop of streets over and over again, the drivers never getting out, and never stopping for long in one place.

Catherine, who has been working in the area for nearly 20-years, said some of them were support workers and others "regulars", either paying customers or so-called "window w**kers" - men who just circle the area looking at the women but never get out.

The support workers hand out condoms and help with drug treatment and safe management of addiction problems.

There were also several marked police cars could be seen patrolling the area, as could PCSOs on foot.

Around half the women seemed to foreign, possible Eastern European accents, or didn't speak English, but one local was Catherine, 40, who said she had two teenage sons and lives in Leeds.

She said she had been working in the Holbeck area for 15-20 years.

Dressed in tight black jeans, brown boots, a black and cream patterned blouse with a heavy black fur trimmed coat and carrying a plastic bag she said the new zone had made it easier for her to work

She said: "Since the managed area its better from my point of view anyway. It means we are allowed to work from 7 in the the night to 7 in the morning.

"We get more protection by the police. I've no idea if they have put more CCTV in, I haven't heard yet, but I think they should."

Speaking about her family and her situation, Catherine said: "I have two teenagers but they don't know what I do.

"I first came down here with another girl about 18 years ago, to watch her back as she was only a young girl, about 18 or 19. It was a girl I was living with at the time and I'd watch her get in the car and know what car it was.

"Then a security guard who worked down here said 'oh I'd pay her #20 for a bit of oral' one night and I did it.

"I had seen how much money she were getting and it just grabbed me in."

Catherine explained she could make £100-200 depending how long she stayed out on the street for.

"That would mean me going home in the morning though, that could be three to five punters.

From the way she talks making money from sex in Holbeck is as easy as going out for a loaf of bread.

She said on one occasion she drove to the area, parked up and was back in her car heading home to her children 25 mins later having made £50 for sex with a client.

But she said business can be slow and: “I can be down here three hours and not make anything.

“It's my only income except for £160 a fortnight in benefits.”

Catherine said: "More often than not sex is in a parked car but it depends.

“I trust my instincts as to whether to go back to someone's house. The think is I ain't got a place to take them to and I wouldn't take them home because of the boys.

"Some of the girls have place but I don't think they are round here, they are in the city.

"I've never worked in a brothel, this is all I've ever known."

Speaking about her clientele, Catherine said: "It varies, you can get alright ones and you can get arrogant ones."

When asked about the cars driving round the area, she said: "They don't all go physically with girls, some drive round and have driven round for years, the just watch them. Window w**kers we call them.

The mum of two said she used to be addicted to crack and heroin but isn't any longer and explains she charges £20 for oral sex, £30 for sex and £40 for both, adding "that depends on what customer you get though”

She added: "I was a receptionist before this then I got into drugs. I was on crack and heroin then.

"A lot of the girls are on drugs, that's what drives them.

"I have been out every night before but not now, its too cold. But I'm not forced out because of the drugs anymore but some girls don't have it as easy as that.”

Catherine was working only a minute or so drive away from where sex worker Daria Pionko, 21, was found two days before Christmas. She had been violently assaulted and died a short time later in hospital.

She said: "I've never had any hassle from punters, touch wood, But I know people though, people who have been gang raped and all sorts.

"Its still a dangerous place, every time you get in a car you're vulnerable. You have to watch you back every two minutes round here.

"I vaguely knew the girl who died but she didn't speak very good English.

"Its been different since that death, its been quiet. I think there's been fewer people out. It was awful.”

Catherine said there is a lot of help from support workers, providing condoms, safety alarms, food and outreach programmes such as STD checks.

When asked if the other sex workers look out for each other, she said: "I always have, I've got a good rapport with them but a lot of them have issues with each other, usually about money.

"I said to them the other day, look a girl's just died, you should be backing each other up not at each others throats."

Asked what her advice would be to other women who are thinking the new zone might make it it safer to get into the profession, Catherine said: "Don't get into it.

Coalition of Violence against Women launching a new strategic plan

Republican presidential front-runner Donald Trump and top challenger Ted Cruz clashed sharply on Thursday over the Texas senator's eligibility to run for the White House during a tense debate weeks before voters start to pick the party's nominee.