An interrogation of the recently audited report by the Independent Electoral and Boundaries Commission (IEBC) has revealed the fight for numbers between Deputy President William Ruto and ODM leader Raila Odinga, ahead of the August 9 General Election.

The analysis by The Standard explains why the duo has in the last six months been shadowing each other, frequently traversing the vote-rich Mt Kenya, Western, Coast and Rift Valley regions.

The front runners in the presidential race are engaged in spirited campaigns to woo more than half of nearly 22,345,000 million registered voters.

This figure, however, contains details of some voters who have since been expunged from the voter register after the electoral agency on Monday announced that the register only has 22.1 million people. The Wafula Chebukati-led agency is yet to provide a breakdown of the data.

The repeat tours to the populous counties, it has emerged, were informed by the need to bag the millions of votes to propel either of the protagonists to State House.

Regions that witnessed low political activity from Dr Ruto and Mr Odinga are now being perceived as being the rivals’ strongholds.

In the period under review, Ruto visited Mt Kenya 36 times while Raila made 15 trips, signalling the new-found battleground status of the region.

According to computations from IEBC data, Mt Kenya region boasts of 5.8 million votes, which each of the presidential candidates is keen to corral into their formations.

This, coupled with the fact that Mt Kenya region is not fielding a presidential candidate for the first time in history, explains the frontrunners’ spirited tours.

President Uhuru Kenyatta’s endorsement of Mr Odinga also fueled the cutthroat battle for the heart and soul of the mountain region.

The heightened forays into the Western region, which has been traditionally viewed as Mr Odinga’s stronghold, were seemingly necessitated by the decamping of Amani National Congress party leader Musalia Mudavadi and Ford Kenya’s Moses Wetang’ula to the Ruto-led Kenya Kwanza Alliance where they are seeking to deliver a sizeable number of the Mulembe votes.

Then there is Ukambani region where Ruto made a record 14 visits in a bid to wrestle the votes from Azimio’s hold. Ukambani has previously voted for Mr Odinga who has made two visits to the region in the period under review.

A spot-check revealed that Raila relied on affiliate parties from the region to endear him to the masses. Machakos has 695,546 registered voters, Kitui 536,446 and Makueni 479,050–numbers the duo is seeking to influence to vote in their favour.

With 46 days left to the elections, the presidential race has crystallised with Prof George Wajackoyah, lawyer David Mwaure, Ruto and Raila rising to the top as the candidates who were given the nod to contest by IEBC.

The rigorous vote-hunt campaigns by Ruto and Raila, however, have set them apart as favourites. But the jury is still out on who will amass majority of votes to form the next government. 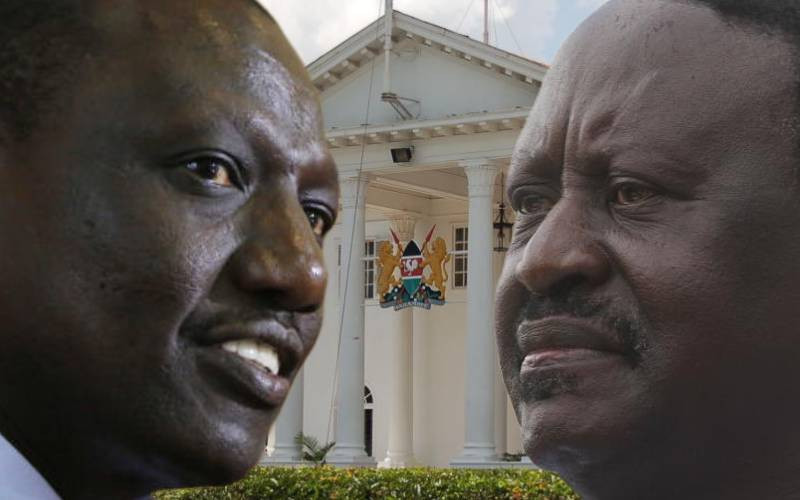 Premium Ruto and Raila rely on backyards to get head start in bruising battle
DP Ruto has slight advantage of 2,432,441 votes from his Rift Valley while Raila’s Nyanza turf has 2,160,439 votes.
Politics
By Josphat Thiong’o
8 days ago