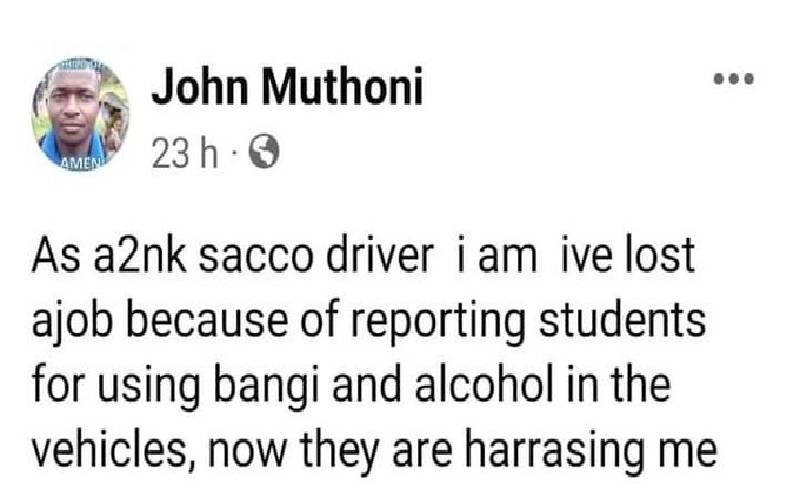 The Director of Criminal Investigations, George Kinoti, has asked to meet a driver who was fired for attempting to report students smoking bhang in the vehicle.

Driver John Muthoni worked with the 2NK Sacco. He reportedly drove to Sagana Police Station upon realising that the high school students he was carrying were smoking bhang and drinking alcohol.

Muthoni was transporting students from Nyeri to Nairobi for their mid-term break.

After failing to contain the rowdy and highly intoxicated students, the driver resorted to driving them to the nearby police station.

Unfortunately, the seven boys and seven girls jumped from the windows of the moving matatu before Muthoni could reach the report desk.

He later took to Facebook where he reported that he was sacked over the incident.

Kinoti has “noted with grave concern the unfolding development and would like to meet the dismissed driver soonest possible”.

Muthoni was requested to contact the DCI urgently through the toll-free hotline 0800 722 203 or present himself at the DCI headquarters along Kiambu Road on November 29.

The DCI said Muthoni should instead have been commended by his employer for being brave and risking his life to report a serious crime of immorality that involved high school students, instead of being shown the door.

The statement on DCI’s Twitter said, “drug abuse is a crime that breaks the hearts of many parents and ruins the lives of many young men and women.”

The DCI said it noted with great concern that school children are increasingly becoming vulnerable to the temptation of drug use during mid-term and holiday breaks.

“This might have contributed to recent acts of criminality, involving torching of school dormitories and other properties.”

Detectives in Nyeri have made good progress in tracking down the students who escaped and once investigations are completed, they will face the full force of the law.

Activist groups leading protests since the coup have demanded that the military exit politics altogether.

Two drivers and two passengers died on the spot.