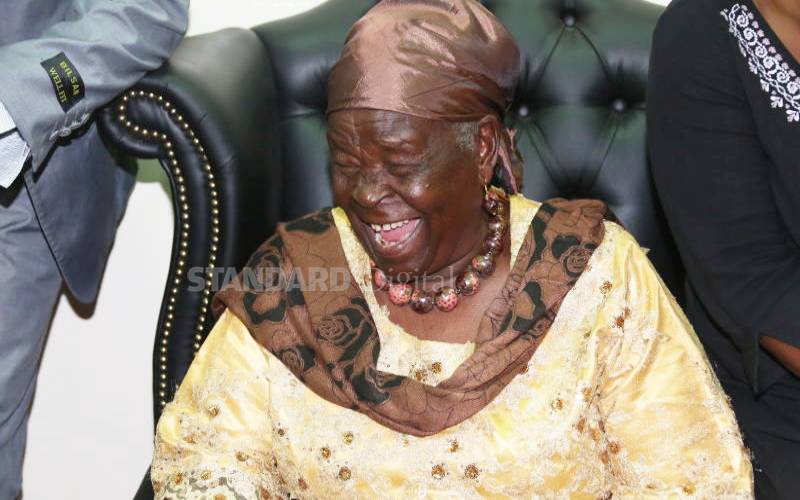 Kenyans on Monday woke up to the news of Mama Sarah Obama’s (pictured) death.

She was the grandmother of former US President Barack Obama.

“In between, she became a symbol of the resilience and confidence of the African woman with a unique capacity to face the challenges of life. She utilised her grandson President Barack Obama’s success to promote girls’ education and fight social ills through her Foundation.”

Twitter user Shynne Kibunga said, “The people of Siaya and the world in particular have lost a legend. Mama Sarah Obama has gone to be with the Lord. My prayers to all the bereaved.”

Sarah had been sick for a while and died while undergoing treatment at the Jaramogi Oginga Odinga Teaching and Referral Hospital in Kisumu. She was admitted to the hospital on Sunday morning.

Another user, Shylla, tweeted, “Sleeping is natural, but waking up is grace.” On her part, Elsie Muhanda said Sarah inspired many during her lifetime, including the Obama family.

Social media users wished the Obama family well, with some saying, “May you find strength during this difficult time.”

Sarah was the third wife of Hussein Obama. She died aged 99. Her burial is expected to take place in Kogelo later today, but it is yet to be confirmed.

Nairobi Governor Anne Kananu said, “I extend my deepest sympathies to family and friends of Mama Sarah Obama, and to former US President Barack Obama and the people of Kogelo , Siaya county. May the soul of your grandmother be at peace with our Heavenly Father. Rest in peace Mama.”

Vinmax Lagat on his part said, "We are still joking with life and we don't know what plans are awaiting us. Maybe it is time for us to shy away from the lusts of the world and build a relationship with God. Rest in peace Mama Sarah Obama".

Other users like Muchoki Ngugi urged people to "Do something today that your future self will thank you for. You greatly encouraged me a lot [in] this moment. Rest in eternal peace Mama Sarah Obama."

Marvine Ambetsa added, "Indeed she was a great woman who has done a lot in the education sector."

At the same time, Austin Tunoi tweeted, "Mama Sarah Obama did not die. Old people don't die but rest. She rested from her industrious life."