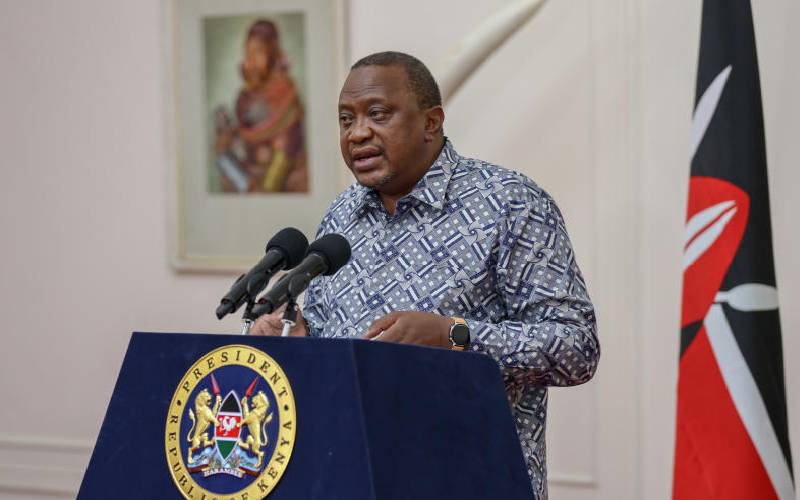 President Uhuru Kenyatta (pictured) today joined other regional leaders for the 38th Extra-Ordinary Summit of the Assembly of Heads of State and Government of the Intergovernmental Authority on Development (IGAD) held in Djibouti.

The meeting was convened by Prime Minister Abdalla Hamdok of Sudan who is the current Chairperson of the IGAD Assembly and attended by Presidents Ismail Omar Guelleh (Djibouti), Mohamed Abdullahi (Somalia) and Prime Minister Abiy Ahmed of Ethiopia.

At the meeting, also attended by the chairperson of the African Union Commission (AUC) Moussa Faki Mahamat, South Sudan and Uganda were represented by Vice President Rebecca Garang and Amb Rebecca Otengo, the country's envoy to Djibouti respectively.

In his welcoming remarks, host President Ismail Guelleh applauded the progress made in the search for sustainable peace and stability in the region despite disruptions posed by the Covid-19 pandemic and other setbacks such as floods and the desert locust invasion.

In his address, AUC chairperson Mahamat said the diplomatic tension between Kenya and Somalia was a concern for the African Union.

Mahamat called for dialogue in de-escalating the tension, saying the two countries share a long history of good neighbourliness and cited Kenya's contribution of troops to the African Union Mission in Somalia (AMISOM) and its hosting of a large population of Somali refugees as key reference points.

On Ethiopia, the AUC chairperson urged IGAD member states to assist the country in dealing with the humanitarian crisis arising out of the conflict in its Tigray region.

President Kenyatta, who arrived in Djibouti on Sunday morning, was accompanied to the summit by Foreign Affairs Cabinet Secretary Raychelle Omamo.