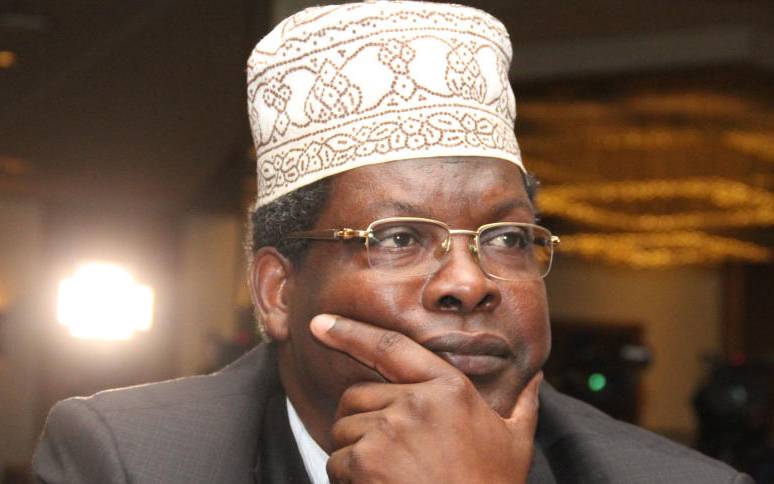 Interior Cabinet Secretary Fred Matiang’i has broken his silence on the troubles lawyer Miguna Miguna (pictured) has encountered in his attempt to return to Kenya.

Dr Matiang’i said existing laws made it difficult for Kenyans who either renounced their citizenship or were exiled to acquire passports.

“We are witnessing a lot of acrimony on an issue everyone thinks is common sense. We are not the ones who passed the laws,” he said on Wednesday during the official opening of a three-day security meeting in Mombasa.

The CS said the government had no intention of frustrating Kenyans who wished to regain their citizenship and acquire passports, adding that proposals had been made to change the law.

“I have written to the Attorney General, on advice from the technical people, to look at our proposal and, if in agreement, to forward it to Parliament.”

One of the laws Matiang’i proposed should be changed is the Citizen and Foreign National Management Services Act 2011. He, however, failed to state which sections should be amended and why.

“If we fail to implement it, we will be hammered,” Matiang’i said.

Miguna had posted on Twitter that the government was preventing him from flying into the country to attend his father-in-law’s burial.

He claimed he was still in Germany, where he was barred from boarding a flight to Nairobi at Frankfurt Airport after the government issued a red alert against him.

Air France also confirmed that due to the alert, the lawyer was ejected from flight AF0814 after boarding at the Charles De Gaulle Airport.

Miguna was first arrested, detained and deported in 2018 after the State claimed he had not re-applied for Kenyan citizenship after the promulgation of the 2010 Constitution.

The State claimed Miguna was a Canadian citizen. On March 29, 2018, the barrister was again denied entry at JKIA.

The lawyer’s deportation has since been ruled as illegal by the courts, which have awarded him Sh7 million as compensation for violation of his rights during the process of returning him to Canada.

Government Spokesman Cyrus Oguna said the lawyer should obtain a valid passport from Kenyan missions abroad to be allowed into the country.

Matiang’i said the laws on people regaining citizenship and acquiring passports were stringent, adding that they should be reviewed.

He stated that it was the right time to review and amend the laws to make it easy for Kenyans to regain citizenship. “The old Constitution did not have provisions for dual citizenship. So those Kenyans who denounced their citizenship should be facilitated to regain it,” he said.

He added: “We have an opportunity now to embark on statutory changes and have come up with proposals.”

A top Kenyan athlete ran away from anti-doping testers who had visited their training camp unannounced to take samples, a senior athletics authority o

By Steve Mkawale and Patrick Kibet | 6 hours ago