Sonko fails to appear for assault case in Voi 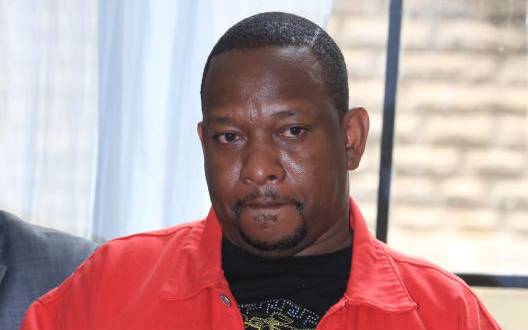 Embattled Nairobi Governor Mike Mbuvi Sonko (pictured) yesterday failed to present himself in a Voi court to answer to charges of assault.

The governor was to take plea over three counts related to his December 6 arrest drama in Taita Taveta County, but his lawyers said the county boss was unwell.

Dozens of anti-riot police were deployed in Voi town and the court premises where Sonko was to appear. The Standard established the policemen were summoned from Wundanyi and Mwatate to assist their counterparts in Voi to beef up security.

The curious public were barred from entering the court premises while journalists had to produce their press cards to be allowed in. Police had a difficult time controlling the surging crowd.

Earlier, county Police Commander Said Kiprotich told The Standard the governor was in Voi town and would present himself in court to answer to the charges.

About 20 members of Nairobi and Machakos county assemblies and seven lawyers representing the governor attended the brief court session.

“We have come here to give moral support to the governor,” said Matungulu MCA in Machakos Magdelin Ndawa.
Court sources said they were to start with the case facing the governor first but the magistrate later decided to deal with others cases first.

When the charge sheet was read at 9.30 am, Sonko’s lead Counsel Cecil Miller told the Voi Senior Resident Magistrate Fredrick Nyakundi that their client was sick and unable to attend the court as directed.

The lawyer asked the court to allow the governor to appear on January 21 next year to plead to the charges.
“The governor is still unwell and should be allowed to come back to court on January 21 to take a plea. I have a letter from the doctor which I had already presented to the prosecution,” Mr Miller told the court.

He added: “The court should allow the governor to continue with the bed rest. In view of this, we are hereby praying to the court to defer the case to January next year,” the lawyer told the court.

Another of the governor’s defence lawyers George Kithi said Sonko was suffering from high blood pressure.
“The governor is under doctor’s observation at his residence,” he told journalists outside the court premises.
Dr Esther Wekesa, a palliative care and pain management specialist, said the governor, 44, is a patient currently under her care in Nairobi.

In her letter presented in court as proof, Dr Wekesa said the governor was admitted to Kenyatta National Hospital on December 9. “The governor had no previous history of hypertension. He was started on antihypertensive and analgesics and later discharged to continue with treatment at home,” stated Dr Wekesa in her progress report on the governor’s health condition.

Prosecution led by the Director of Public Prosecutions, Coast region, Aloice Kemo did not object the deferment of the case.

In his ruling, the magistrate deferred the cases as prayed by the defence to January 21, 2020. “The suspect is supposed to present himself to the Voi Police Station for fingerprints taking before being arraigned,” ruled Nyakundi yesterday.

The magistrate ordered that the defence lawyers be provided with the charge sheet.

Sonko will be charged on three counts bordering on resisting police arrest and disorderly conduct for battling police when they arrested him on December 6 and flew him to Nairobi where he faced graft charges.

Sonko and 15 other county officials are accused of stealing more than Sh350 million from the City county.

During his arrest, several police officers among them Coast Regional Police Commander Rashid Yakub alleged they were insulted as they battled to arrest the governor.

Police said already, the charge sheet had been prepared following approval of the Director of Public Prosecution.

Four witnesses among them Mr Yakub and three other police officers had been listed to testify against the governor, who confronted the police as he allegedly refused to board a police helicopter at the airstrip.

The charge sheet seen by The Standard states that Sonko, on December 6, 2019, at Ikanga Airstrip in Voi, unlawfully assaulted Mr Yakub, and a police officer by kicking him in the thigh in the course of executing his duties.