The flag was hoisted half-mast at the State House and all public buildings and grounds, military posts and naval stations.

Foreign leaders, supporters and ordinary citizens gathered at the National Sports Stadium to bid farewell to Mugabe after a week of disputes over his burial that threatened to undermine President Emmerson Mnangagwa.

Mugabe, who ruled Zimbabwe for 37 years until he was ousted by his own army in November 2017, died in a Singapore hospital a week ago aged 95.

Uhuru is among sitting and former presidents who will participate in the final rites for Mugabe. 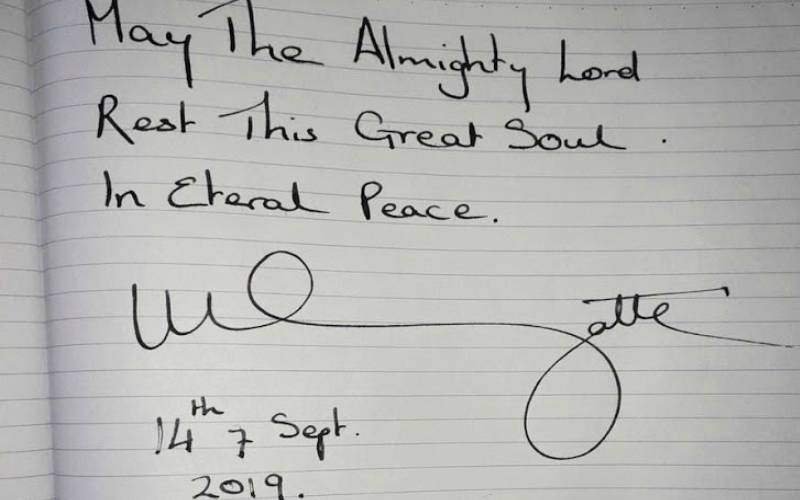 The former presidents expected to attended are Jacob Zuma and Thabo Mbeki of South Africa, Joaquim Chissano of Mozambique, Kenneth Kaunda and Rupiah Banda of Zambia, Festus Mogae of Botswana and Sam Nujoma and Hifikepunye Pohamba of Namibia.

Mnangagwa and the ruling ZANU-PF party have wanted Mugabe buried at a national monument to heroes of the liberation war against white minority rule. But some relatives, expressing bitterness at the way former comrades had ousted Mugabe, had pushed for him to be buried in his home village.

African heads of state, including long-ruling leaders from Equatorial Guinea and Congo, started arriving in Zimbabwe on Thursday night for Mugabe’s funeral.

Banners reading “Hamba kahle, Gushungo,” (go well, Gushungo)” in reference to Mugabe’s clan name and “Pioneer of nationalist politics,” were on display at the national stadium.

Cleo Mapuranga, a caterer, told Reuters: “I feel low because Mugabe fought for us. I remember him for land to the blacks, economic freedom and higher education which was non-racial.”

“Now, people are suffering. No one is controlling the prices in the shops. Our finance minister is trying to implement first-world policies which don’t work in third-world countries.”

“The shame lies at the feet of the perpetrators.”

By Micah Sali | 9 hours ago

Leven House: The anti-slavery base that hosted Dr Krapf
;
Feedback