A traffic police officer based in Kitale told the National Police Service Commission (NPSC) vetting panel that he was instructed to be sending Sh3,000 to the OCPD weekly.

Samson Kipkulei Ayabei said that in 2012 it was a tradition at the station for officers to send money to then Webuye OCPD Allan Willy every Friday.

“Let me be honest. When I was transferred to Webuye my then base commandant told me that every Friday I had to send Sh3,000 to the OCPD. This was the culture I found in the station,” he said.

And when probed by the vetting panel over the source of the money, Mr Ayabei said he removed it from a welfare fund they formed with 12 colleagues.

“We know what has been happening in the Traffic Department where junior officers send money to their seniors every Friday. We have this information and you should be candid enough and tell us what was happening with this transfers,” NPSC commissioner Ronald Musengi told the officer.

Ayabei in his Mpesa statement had sent Sh25,000 to the OCPD in nine transactions and another 17 transfers to Traffic base commander Abubakar Mwanawasa.

Ntulele sub-county Sergent Jacob Mugaya Minade also told the panel he was forced to send money to his seniors while serving in Nakuru before he was transferred to Narok.

When asked by NPSC chair Johnston Kavuludi to explain what the money was meant for. The officer said it was used to fund construction of a perimeter wall at the Central Police Station and purchase a generator.

“I sent the money to my boss because there are several projects that were being worked on, including construction of a perimeter wall, extension generator and stationary,” said Minade. The officer was further taken to task for sending Sh9,800 to the former Rift Valley Traffic Enforcement officer Mary Omari.

But he defended the move saying officers have chamas where they contribute money and send to anyone facing a challenge.

Lawyer Ngetich Kipkoech representing the Law Society of Kenya asked him to name any officer who was helped while sick, but Minade said he could not remember their names.

He is among officers accused of receiving a total of Sh2.6 million between 2012 and 2013, that was deposited to his M-Pesa account.

Another officer Boniface Kimeu Kivuva conceded to receiving ‘gifts’ from the public saying it depends on the circumstances.

Mr Kivuva was accused of receiving deposits amounting to Sh1.2 million through M-Pesa.

“I cannot say I have never received money from the public, however it depends on circumstances,” he explained.

Corporal Thadius Omondi who works at Mumias traffic base said he gets a meagre salary and was forced to rely on loans from the police Sacco to meet his expenses.

Mr Omondi could not explain to the vetting panel how he pays for his expenses after he was found to have a negative net-worth according to his wealth declaration form.

He said his net pay was Sh13,000 and he had no other income generating activities. “I don’t have any assets and use loans to pay school fees for my five children and relatives,” he told the panel.

This revelation left the panel chaired by Musengi with more questions on the financial state of the officer as his Mpesa statement showed he had received over Sh2 million from unknown individuals.

And Corporal Albert Onyapidi Epara recounted how he survived a snake bite after it crawled into his bed due to the dilapidated houses.

Mr Epara told the NPSC that the deplorable living conditions expose them to danger. Epara further said promotion was a challenge too.

Prof Muigai warned if EACC’s involvement in the probe is not terminated, questions could be raised about the commission’s independence and its ability to render an impartial decision. 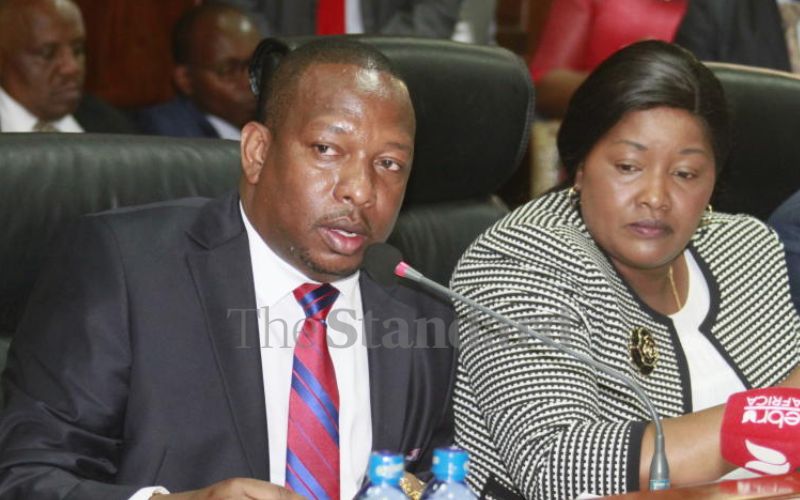 By Josphat Thiong'o | 4 minutes ago

By Philip Mwakio | 54 minutes ago

By Betty Njeru | 58 minutes ago