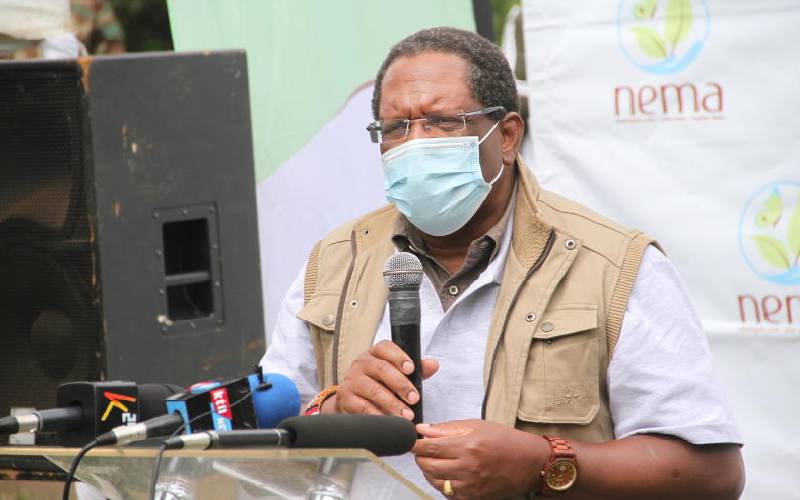 It has become fashionable for the Jubilee administration to cast aspersions on the dealings of past administrations. It has embarked on a moral crusade to evict those on “illegally” acquired land.

But from the Embombut and Mau forests to Kariobangi and Ruai recently, the manner of evictions has been an attestation to the callous disregard for the well-being of the indigent; an insufferable affront to citizens’ rights to shelter and destruction of their livelihoods.

Last week, the State announced plans to seize land it alleges was grabbed from Ngong Forest. Environment Cabinet Secretary (CS) Keriako Tobiko (pictured) says “all parcels of this forest, whether people have titles or not, whether they have built structures for business or residential houses, will be reclaimed.”

Understandably, many Lang’ata residents are alarmed, more so, when government threatens to fence off gates to private property and to “release wild animals into those estates.” What cheek! What gall! Is this a case of monkey see, monkey do? Is the CS acting on now what seems to be a standard in the Jubilee operational manual on evictions?

What the CS and others appear to fail to appreciate is that government exists in a continuum; only administrations change. But even with such change, decisions undertaken by one administration bind the next. This is unless such decisions are proved irregular or illegal, leading to a process of regularisation or reversal.

Lang’ata residents have provided documents to prove that the land they occupy was properly excised by the Moi administration in 1998. According to them, the law as it was at that time, was followed.

What was required then was a notice of intention by the Minister of Environment and Natural Resources followed by a gazette notice. Kenya Forest Service then gave up the title it held to the Ministry of Lands to facilitate survey, sub-division and issuance of new titles.

These are the titles people hold presently, which the government, in a strange disapproval of its own actions, now declares illegal.

Lawyer John Mburu, speaking on this issue, raises fundamental questions. Was there a legitimate government in place in 1998? Did it have powers to allocate land? If it did, how did it exercise those powers? It is indisputable that at the time the Ngong Forest was being excised, there was a legitimate government in place with powers to allocate land.

What may be in contention was the manner in which it went about doing so. It is possible that procedural lapses may have occurred. The Ndun’gu Land Report recommends that where genuine mistakes were made, the same be corrected through regularisation. This is to avoid errors of government from being visited on citizens.

Naturally, a line is drawn where fraudulent activity is suspected. There is a presumption that public servants work in good faith. That presumption is rebuttable where there is evidence that an act by a public servant was carried out for personal benefit.

Regarding the Ngong Forest allocation to Lang’ata residents, it behooves the CS to present evidence of fraudulent activity. Assuming such evidence exists, there is a process of title cancellation sanctioned by law. That process does not include the preposterous notion of fencing in hapless residents and releasing wildlife to roam their homes.

The Ngong Forest saga speaks to failures by successive administrations to provide affordable homes for citizens. Lang’ata residents, acutely aware of the improbability of government promises to provide 500,000 houses in five years, have done what every Kenyan does; fend for themselves.

Trusting implicitly in the sanctity of the Kenyan title deed, they have provided private solutions to public problems by building their own houses. Having done all legitimate searches in government registries and found their properties clean, they have invested heavily in their “own four walls”.

They must be protected. Mr Tobiko appears to suggest that the rights of wildlife trump those of human beings. That is monkey business!

At stake is the government’s word, which is its bond. If titles it issues are no longer worth the paper they are printed on, uncertainty is created in the entire land sector. Transactions like mortgages and other loans secured by land become doubtful.

Legacies to future generations are repudiated by “worthless” paper. This is a monkey that the Jubilee administration will certainly not want on its back.