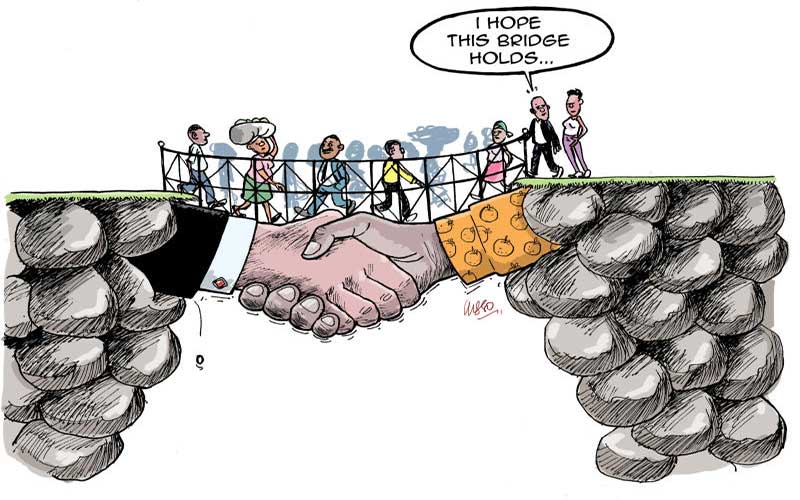 While Kenya has seen many strange and surprising political partnerships, none comes close to the 'Handshake' of March 9, 2018.  The rapprochement was not between two politicians in the race to gain power but between an election winner – a president in his final term of office, with no elections in the horizon – and his erstwhile political nemesis.   That was the political equivalent of an earthquake.

No one saw it coming, not a single commentator had an idea it was even in the pipeline. When it happened it caught many people off balance, especially those who felt they had something to lose by the alliance. Some of these figures, right from the off, tried to paint the handshake with various strokes of malfeasance and suspicion.  They tried to instil in the public, who largely saw this as a popular and welcome event, the idea that it was not in their best interests. The first tactic was to attack the handshake as a show with no practical meaning. Then when the Building Bridges Initiative (BBI) was borne and it became clear that the meeting of minds was no mere window dressing, they turned their attention to the BBI itself. Many saw that the BBI was an honest and unprecedented initiative that truly wanted input and engagement from and with the people across the country. The report was eventually welcomed by all-comers from across the political spectrum, and even critics were forced to admit that this was a revolutionary programme.

There were disagreements about how it would be implemented, by parliamentary law or public fiat, through a referendum, but few could find the requisite holes to publicly stand against it. Now that the BBI is releasing its final report, the handshake detractors are trying a new tact. There is now an argument put forth that the partnership is not healthy for Kenyan politics and democracy because it takes away the element of competition and debate necessarily inherent in such a system. There are many problems with this point of view. Firstly, these commentators have very short memories. They forget that in Kenya, intense political debate can result in violence, ethnic antagonism and bloodshed. Competition and debate are important but they can just as easily take place within a circle of influence and fraternity.

The handshake broke down barriers but not ideological differences. Uhuru and Raila still think differently, but now can work together, exchanging ideas and arguing their respective points, as allies and not as enemies. Secondly, unity is always preferable to division. Divisive politics gets us nowhere, it increases animus between people and ensures that politics becomes about point-scoring rather than working for the general good, as public servants and elected representatives of the people are supposed to act. Thirdly, the more representation there is in the decision-making echelons, the more Kenyans will feel that they are being appropriately served and listened to. They see that as opposed to sniping from the side lines, their leaders, even though they might be in the minority, will still have a say and their voices heard. Simply put, the handshake has only strengthened Kenyan democracy. We can see this most clearly because many of these principles will now be ensconced into the BBI final report. We will have an expanded Executive, a wider circle of decision-makers who will represent multiple parties, communities and ideologies.  This will require permanent and baked-in checks and balances within the political hierarchy. The handshake and the positive changes that it has brought to Kenyan politics will not be a quirk but a feature of our system moving forward. There will always be room for opposing voices and there will even be a position of Official Leader of the Opposition, so divergent voices will only be strengthened by an official office. Excuses are running out for those who wish to dismiss the handshake and BBI in the minds of the people. Those who have most to lose from the new and positive realignment have simply moved from one losing argument to the next, but don’t expect them to give up. However, we, the people, can diminish their power by not listening to them and jumping on board with the innovative, fresh and vital new way of Kenyan politics.  The handshake puts the Kenyan future in better and unified hands. Mr Kwinga is a Nairobi-based political scientist