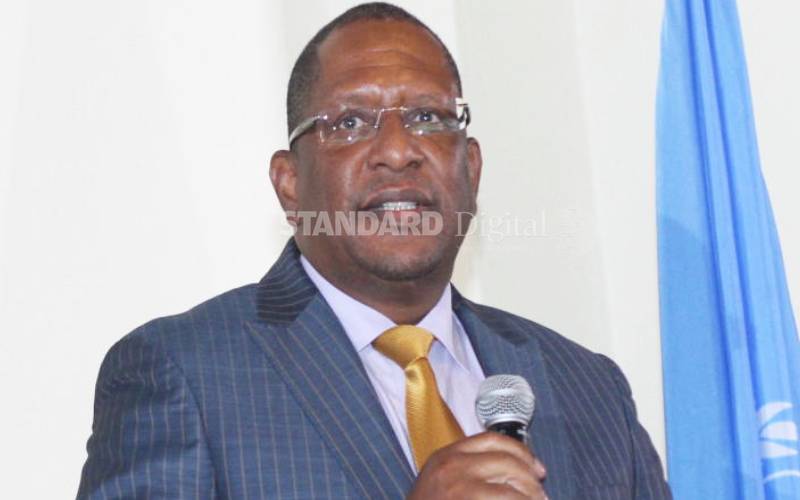 Open and flagrant disregard to existing laws in a constitutional governance system is the very definition of impunity.

By a series of pronouncements between July 2019 and the present, the Cabinet Secretary for Environment Keriako Tobiko (pictured) pronounced a new round of evictions to allegedly rid the water tower of forest invaders. In his estimation, 60,000 families will be flushed out of the Mau.

Tobiko has made it clear that the evictions are a necessary evil, to ensure no further encroachment of the Mau and allow for the restoration of the forest to its original state.

This, he says, will secure the critical catchment area that feeds the entire Maasai Mau and Serengeti ecosystems, a strategic, transboundary natural resource-rich in wildlife and other biodiversity.

But then the good intentions of conservation must be pursued in a manner that comports with the law of the land.

International law recognises the multiple impacts of forced eviction including the inevitable break up of families, undermined social and cultural ties, disruption of educational opportunities, deprivation of such vital necessities as food, shelter and medicine to such populations, and exposure of innocent persons, especially children, to acts of violence, disappearances and rape in camps.

As a result, international law, specifically the United Nations Guiding Principles on Internal Displacement embodied in the Great Lakes Region Protocol on internally displaced persons (IDPs), and the Kampala Convention on IDPs takes the view that forced removal should be conducted as a measure of last resort where no other feasible alternatives exist.

It means, even where property rights are in question such as in the case of Mau, international law recognises that habitual residence is ordinarily sufficient safeguard against forced eviction.

International law further enjoins states to undertake displacement if necessary only after procuring free, informed consent of the affected persons.

In recognition of Kenya’s strong commitment to these standards, and the need to ensure the existence of a domestic framework to facilitate implementation, Parliament enacted the Prevention, Protection and Assistance of Internally Displaced Persons and Communities Act of 2012.

This law does the following: The Act provides that in exceptional cases, where displacement and relocation due to development projects or projects to preserve the environment may be justified, they must be undertaken in accordance with the applicable law, and proper assistance extended to the affected groups.

Th 60-day notice issued by the CS presents a fait accompli that constitutes no accommodation contemplated under the Act and is nothing but an arbitrary decision that provides no durable solution to the affected.

Additionally, under the Act, the Government is obliged to seek international assistance to ensure protection and assistance to internally displaced persons if its capacity is inadequate.

Failure to seek such assistance, therefore, constitutes malicious intent on the part of the ministry to subvert the intentions of the Act by facilitating undignified forced removal of occupants of the Mau.

More significant from an individual responsibility perspective, the Act prohibits the aiding or abetting of forced displacement by any person, including by the Environment Cabinet Secretary through acts amounting to crimes against humanity.

The critical question to ask is, who has raped the Mau ecosystem? Is it these peasants targeted for forced removal? Isn’t the Mau’s present state, a function of the unsustainable activities of large scale logging companies licenced by the Kenya Forest Services (KFS), which ironically is the lead agency in the current eviction operations?

Who has benefitted from logging licences in the Mau over the last two decades?

I highly doubt that the large scale destruction of the Mau can be attributed to the peasantry.

KFS ought to open its licencing registry to the public so that we know who has benefited from the wealth of the Mau.

In the meantime, the current programme will neither yield conservation dividends nor prevent further encroachment and should be halted.

Dr Sing’Oei, is Legal Adviser, Office of the Deputy President . The views expressed here are his own.