Jubilee looks all set to go the Kanu 1966 way 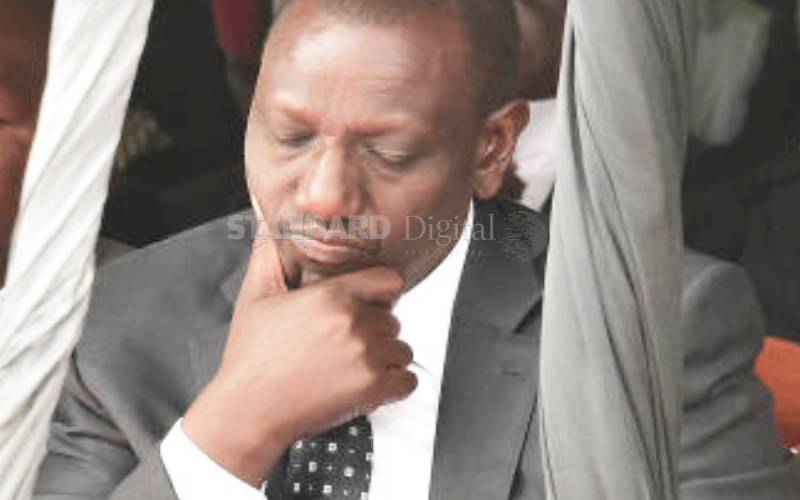 Jubilee Party has achieved its objective. Ten years for Uhuru Kenyatta as President and 10 years for William Ruto (pictured) as Deputy President and has gone the way of our ancestors. The poem by Stephen Lubega in ‘Poems from East Africa’ edited by David Cook and David Rubadiri titled ‘Requiem for Kagwima’ aptly describes the state of affairs in the party; “Irreconcilable love and pity

Butted against my heart; For my gentlest and kindest, The bravest and humblest friend Dipped his life in a river… I entered a gloomed grief

That was handed down to me I swallowed the best of my smiles. And gave a timid bow to death. A hundred fears poured into my shrunken heart As fast waves against a wreck

Gloved grief punched and hooked my ego Only to crown me with dark haloes” The death of Jubilee Party will produce many orphans. The chief orphan will perhaps be the Deputy President. For in Kenya politics, it has been the person in that position that all the others were either for or against. The events of February–June 1966 in Kanu are about to unfold before our eyes. In ‘Tom Mboya: The Man Kenya Wanted to Forget’, David Goldsworthy wrote that on  February 27, 1966, Mboya the Kanu Secretary General, made the bombshell announcement that a full party delegates conference–the first since 1960–would be held in Limuru on the weekend of 12–13 March. It was a swift and deadly operation, well organised and financed. The motive was to tame and vanquish Jaramogi Oginga Odinga, the First Vice President of Kenya. Kanu, then, was not a prize worthy of struggling over as Jubilee Party is today. The national organs were moribund, the head office was neglected; a cypher in party affairs. Heavy debts from the 1963 election were still unpaid. For all this, it is not hard to suggest the reasons for the neglect of the party’s national organs by Mboya (the Secretary General), along with other leaders. Jomo himself was setting the style by exercising his authority and patronage through the country’s well developed State structure to the exclusion of the underdeveloped party apparatus. Others followed suit. All the main leaders already met and interacted with each other in their roles as ministers and legislators and felt no great need for an alternative forum.

Most leaders actively preferred a weak party machinery, one that would not be in a position to contain them in their various personal and factional power plays. It was a system of mutual denial in which it was better to have no strong national structure at all than to risk having one which one’s opponents might be able to capture. Does this sound familiar in regard to the Jubilee Party palaver? Wholly aware at last that Jomo was backing his isolation, Jaramogi knew he did he have any future in the party or government. And therefore on April 14, 1966 came Odinga’s resignation from Kanu and government. He issued a long and eloquent statement attacking the “underground enemy”, the “invisible government” which now controlled the elected government. He claimed the Government represented first international forces purely concerned with ideological colonisation of the country which had no genuine concern for the development of the people. Secondly, he alleged the Government also represented the commercial interests, largely foreign, whose primary concern was huge profits at the expense of Kenyans. In the East African Standard of April 15, 1966, Jaramogi proceeded to summarise, the reasons for his resignation from Kanu and government: “It is fairly clear, that there is pressure and desire that I should leave the Government. The authority concerned has, however, shown reluctance to say so openly to the public. If I thought that there was the slightest chance of putting things right from within the Government then this desire to remove me from office would worry me as indeed it has  done for the last one year. However, wananchi (citizenry), my honest opinion is that the present government has reached a point of no return. It can only do for the peoples, the little that the underground master allows it to do. Its guiding star has become personal gain. I therefore find it impossible to be part of it and my decision is that from now on I should be free to join wananchi in demanding that their voice be heard”. Well, that’s how the first vice president of Kenya was forced to resign. Will history repeat itself? If it does, we will all be eager to read Ruto’s resignation letter. For obvious reasons, his resignation letter would be long, eloquent and perhaps pompous. This is how it might read. “Considering the fact that the Secretary General of the ruling Jubilee Party has become the chief strategist of the opposition’, honouring the Jubilee dream and the Jubilee Motto (ha)Tuko Pamoja, proud of my political genius and organisational skills, respectful of the determination of the people of Kenya to vote overwhelmingly for me, committed to the Ruto presidency, recognising the aspirations of all hustlers, exercising my sovereign and inalienable right to vie for the presidency and in view of the fact that ‘tomorrow’s activities are planned today’, I hereby tender my resignation from the Jubilee Party and government.” Mr Chesang is a historian