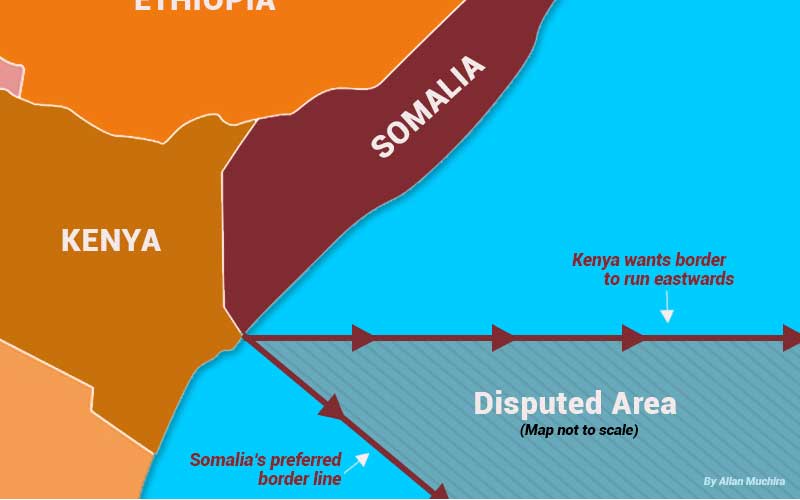 For a long time, conceptions of national security revolved around ability to project maritime capabilities, either in defence or in imposing one’s values on others. The ability to project sea power rises with corresponding ability to monopolise or deny access to critical resources to other countries. Such resources become ‘strategic’ and among them are oil and gas that powerful naval countries try to deny others. Kenya is a victim of extra-continental effort to manipulate ‘strategic’ resources in terms of supply, price, and access. Denying Kenya access to its sea resources, either directly or through proxy, is part of international power play.

Threats to the Kenyan state have been land based, but the threat has become sea based. This is from ‘pirates’ or extra-continental powers throwing their weight around through Somalia as their geopolitical proxy. This reality hit Kenya recently when extra-continental powers organised a Somali oil meeting in London, on February 7, 2019, that was hostile to Kenya’s maritime interests. Somali officials were there to rubber stamp Euro decisions to self-allocate oil blocs in the sea and some of the allocations were in Kenyan waters.

Kenya protested, but Somalia denied having done such a thing. Spectrum Company, the agency for oil bloc allocations, asserted that all its claims were in Somali waters and none in the disputed zone. The accusations, denials, and counter accusations brought to the fore the fact that the region is fragile and that extra-continental powers enjoy stirring trouble in pursuit of the hardly defended maritime wealth.

The challenge to Kenya’s sea interests is beyond Somalia. It is part of recent Euro cooking, particularly after 2013 in which President Uhuru Kenyatta annoyed the Euros by winning the presidential election. In 2014, fragile Somalia started selling oil blocs in the Indian Ocean to well-connected Euro companies, some bribing their way into Somali officialdom that in turn helped Somalia to circumnavigate UN sanctions on weapons import. Some of the weapons ended up in the hands of the Al Shabaab. The fact the Somali prime minister was an employee of the oil company formed in 2013 for Somali coast oil and was involved in shady deals that drew the attention of fraud investigators is telling about Somalia as a Euro proxy.

Under such shady circumstances, Somalia ‘found’ resources to claim Kenyan waters. With new found resources, Somalia filed a case at the International Court of Justice (ICJ). At the time, ICC Prosecutor Fatou Bensouda was looking for evidence to lock up President Uhuru Kenyatta. While the ICC effort faltered and left a bad taste, the ICJ one continued.

The Euro provocation through the Somali proxy brings up Kenya’s need to beef up its sea security. Its navy needs strengthening by increasing capacity to project power. Its two bases in Mombasa and Lamu can be enlarged and empowered to operate beyond the 200 hundred sea miles into international waters. Since Somalia and the prospectors have denied they gave themselves Kenyan or disputed blocs, then anyone operating in that zone would be a pirate and should simply be escorted into the international water zone.

This calls for increased naval capacity, including a naval air wing, additional equipment of all types, training, and development of naval/sea industry. Whereas the two existing bases do a good job, there is no harm in adding to Kenya’s sea power by establishing a third naval base at the southern end of its coastline in the Vanga-Shimoni area. This would take care of the likely maritime threat to Kenya’s security emanating from the south.

National security concerns demand beefing up naval forces. It makes Kenyans feel secure and also enables the country to undertake serious exploitation of its sea wealth. At present there is no visible threat from the south, though glaring from the north through Euro use of Somali proxy to Kenyan waters.

Kenya has been warned and should, therefore, increase its sea readiness. In the ICJ, it can counter Euro-Somali proxy claims with its naval operation logbooks, providing security in the disputed area for decades. Although its documents in the African Union and the United Nations are part of the existing evidence, vigilance is a constant security requirement.

Neighbours say suspect has been violent and was released from prison just three weeks ago.