It was an anxious last-day campaign for the seven contenders in the Mombasa governor race.

They held rallies in key battlegrounds to woo over 600,000 votes ahead of the election on Monday.

The front runners in the race, ODM's Abdulswamad Nassir and his rival Hassan Omar of the United Democratic Alliance (UDA) got a major boost after leaders from other parts of the country joined their campaigns.

Former Nairobi Governor Mike Sonko also campaigned for Omar in Changamwe and Jomvu areas that are dominated by the Akamba votes.

This was a day after ODM leader Raila Odinga also met traders and Azimio la Umoja One coalition supporters at the Wild Waters resort and implored them to vote for Nassir.

“I held a three-hour consultative engagement with over 3000 Mombasa business and opinion leaders over the forthcoming Gubernatorial elections on Monday,” said Gachagua on Facebook.

He said that he expounded on the UDA manifesto and the bottom-up economic model that can only be implemented by Omar if elected governor.

Yesterday, Ford-Kenya leader Moses Wetangula also campaigned for Omar warning that Mombasa voters risk being in the opposition if UDA forms the next government.

Omar said Mombasa residents should not be bound by their loyalty to ODM saying they should vote for him so that they be part of the UDA government.

“Vote for me so that when president-elect William Ruto takes over I’m also in charge of Mombasa,” Omar said, adding that Ruto’s win will be validated by the Supreme Court.

Omar said he will serve Mombasa residents equally regardless of their tribal, political or religious affiliation. He said his administration will create jobs for the youth.

“Our housing project which will be part of our labour-intensive programme will create jobs for the youth who have despaired and joined criminal gangs,” said Omar yesterday.

On Mombasa’s huge pending bills, Omar said he will make sure that all suppliers are paid so that the money can be invested in the county.

“We will open up a free market economy in Mombasa. This will increase the local revenue to enable us to pay the pending bill and workers’ salaries in time,” said Omar.

“We will restore Mombasa’s respect. All Mombasa residents will have an equal chance to get the tenders, jobs and opportunities without going through brokers,” he said.

Nassir said he will overhaul Governor Hassan Joho’s administration tax regime that he had pushed many traders out of business. He also said this will encourage investment.

He said Mombasa's pending bills had accrued since Joho's first term and criticised Omar for allegedly failing in his role as a senator.

“The pending bills of Sh4.29 billion accrued from the first term of the county government. Omar was the Senator of Mombasa. He failed in his oversight role,” said Nassir.

He added that he will create special economic zones and industrial parks in Mombasa to create jobs for those who were laid off because of the Standard Gauge Railways (SGR).

“In my second chance programme, single mothers will be empowered. I will introduce feeding programmes in the ECDEs,” Nassir said, adding that Omar cannot run away from Joho’s failures.

When Omar was the senator, Nassir said, he accompanied Joho to tours around the world and failed in his oversight role.

“He is now being pushed down the throat of Mombasa residents by brokers who have failed in their counties. Those brokers are ready to use even the tribal and religious cards to divide Mombasa residents,” said Nassir. 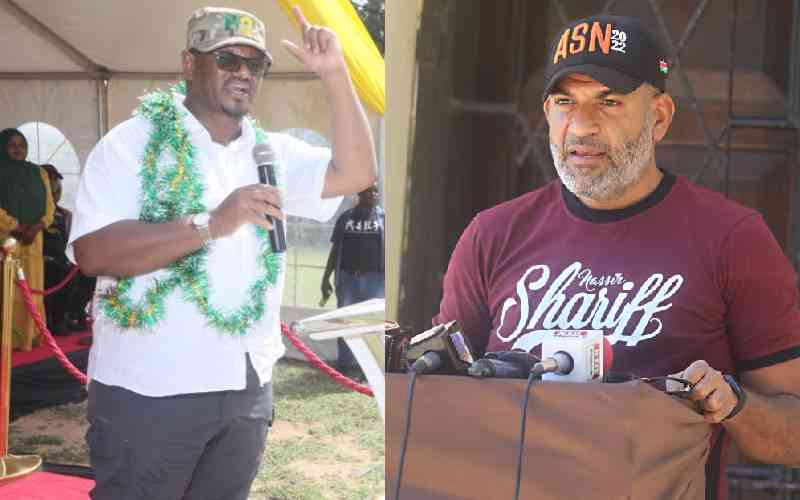