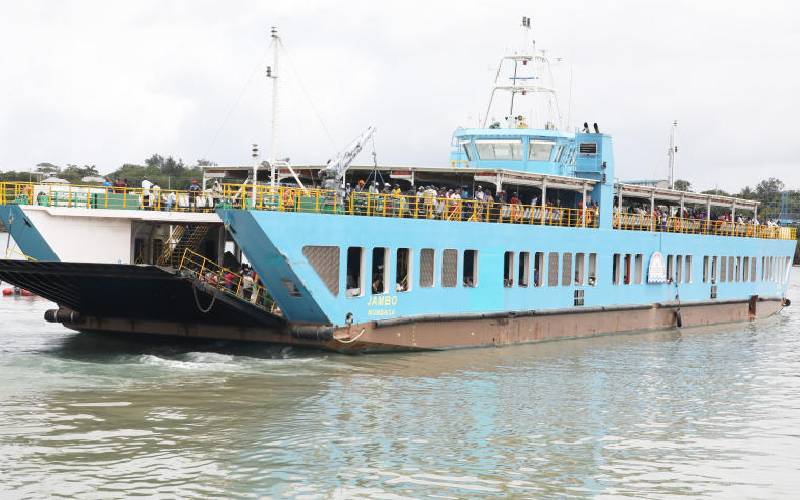 Panic gripped Likoni yesterday after the newly procured MV Safari ferry was rammed on the side by a smaller ferry creating a huge hole in the belly that soon began to take in water.

MV Likoni was sailing from Mombasa island with passengers and vehicles when it lost steering power ramming the MV Safari as it prepared to sail across Likoni channel to the island.

Passengers on MV Safari panicked and fled the vessel back to the Likoni mainland as vehicles were removed.

No one was injured in the incident but the chaos that was unleashed created a big traffic snarl-up around the ferry area.

The Kenya Ferry Service officials, however, downplayed the incident only saying it was a "small' incident.

The MV Safari was at the Likoni side full of vehicles and passengers on board ready to cross to island side.

"Today at 1530hrs MV Kwale while at Mainland Ramp hit MV Safari, leaving a hole on the side which has led to water flooding the engine room. The vessel has been assisted by KPAS tug Simba to get to safety position" read a statement by KPA.

In normal capacity, the vessel carries 1500 passengers and 60 vehicles.

It was the second time in two months that the ferry supplied in May was involved in such an accident.

Kenya Coast Guard security officials deployed to the channel after the Covid-19 outbreak raised the alarm after realising the water had started flowing inside as they hurriedly evacuated the passengers and vehicles.

Coxswain and ferry officials told Standard Digital that the MV Kwale that caused the accident had been having a persistent problem but the management had been reluctant to repair despite several letters written to the concern.

"The water enters the lower side of the vessel hence destabilising the vessel," said one coxswain.

He said the MV Likoni and Kwale have the same problem of sticking to one direction leading to steering failure hence putting lives of passengers in danger when an emergency occurs.

Likoni sub-county police commander Jane Munywoki who leads other officers in controlling the crowd and traffic snarl-up said they were in the area to make sure the traffic moves.

"You can see the traffic is now moving and we will try our best to restore it," she said.

A victim who identified herself as Wendy she heard a loud bang followed by the flow of water on the surface of the vessel.

She said the coast guard security officials and private guards then started yelling to them to disembark while the vehicles owners were told to reverse.

"Ferry yazama shukeni, the vessel is sinking please disembark," she said while she trembles.

Another survivor, Edward Akemo who was on his personal car inside the vessel crossing to the island said his car was damaged as they scramble to reverse.

Akemo who was with other two occupants said he left his car inside after seeing water flowing into the vessel with high speed.

"I was frightened, this reminds me of Mtongwe tragedy where several people died after it sunk

The MV safari arrived in the country late April from Turkey where it was procured at cost of Sh2 billion.