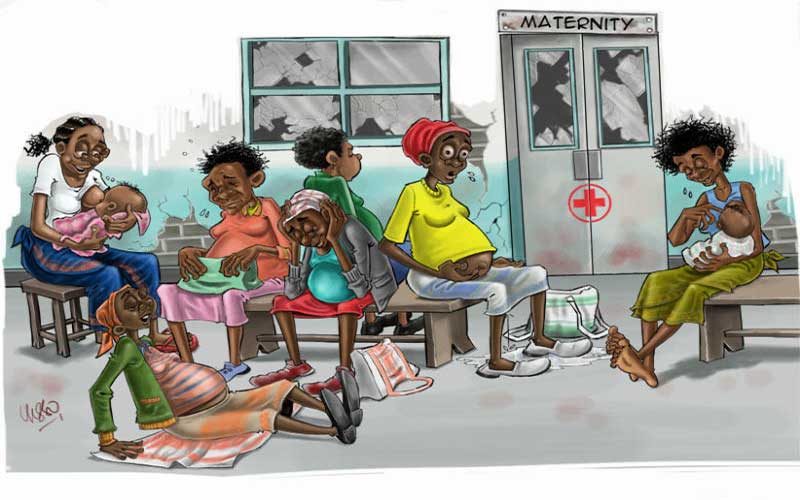 Liars. That is what Kenyans are and from the look of things, they are not ready to embrace honesty and are working hard to become pathological liars since they cannot accept any truth or tell it themselves.

Every time they feel things are not right, as they often are, they lie to themselves that they will bring change by rejecting at the ballot politicians who tell lies, but they always end up electing them again, and then tell more lies to protect them.

Early last week, they were at it again, lying to themselves that they will effect changes and crying when a video clip surfaced of mother in labour pleading for help and wailing while giving birth by the roadside, outside Nairobi’s supposedly premier maternity hospital.

What happened was as a result of a rotten system which in many instances and in several parts leads to maternal deaths. What Kenyans were getting annoyed at was the end result of a system whose rot they have enabled, and was a manifestation of the absence of sexual and reproductive health infrastructure. If that infrastructure existed, that mother — and many others who have died because of complications during pregnancies or childbirth — could not have embarked on that journey, no matter how short, to the maternity hospital, for, there could have been a government-funded intervention she could access. Such an intervention is not only brick and mortar but a sexual and reproductive health professional tasked with monitoring the progress of pregnant women within their areas. That person should exist in a chain of public-funded systems established by the parental authority which cares about the health of the nation.

Sadly, the parental authority does not care, mostly because Kenyans do not put it to task. That such a system is important, it knows, at least on paper, literally, since a policy brief of June 2015 by National Council for Population and Development (NCPD) notes that preventing maternal deaths involves monitoring women during pregnancies and managing medical complications that arise during pregnancy and delivery.

That particular mother survived, but her ordeal is what leads to maternal deaths — and the brief says some of the most critical interventions of preventing maternal deaths are antenatal care and skilled delivery care which need to be expanded and improved.

All those factors were evident in that mother’s case, but Kenyans only know how to make and listen to political noises which leaves them with little time to interrogate the politicians on maternal health systems and services they said are, or will be, in place. Kenyan voters complain that politicians are manipulative liars, but they forget that they elect these liars. They listen to these liars and cheer them on, and when they realise they were lied to, they get enraged — episodic anger that soon dies away.

Several reasons were advanced why this mother was wailing outside a maternity hospital and not inside a labour ward, but Kenyans did not want to hear any of it probably because they knew they were being lied to — after all, aren’t they liars themselves?

Female politicians were castigated, and what was surprising was that Kenyans were suddenly concerned about maternity services in Nairobi and generally the whole country. People were acting as if the conditions have been sanitary and luxurious to write the least, and they worsened only when that poor mother was due.

They cried but their tears were just from their eyes, not from their hearts and their anger was superficial because had they been angry early, that mother — and many others who suffer and die while giving birth in places where there are no cameras — could not have wailed outside a hospital. A few years ago, Kenyans were sold this big story about provision of free maternity services, and they bought it, with their taxes no less. But the talk was about the end of the journey, giving birth, and not providing sexual and reproductive health services during pregnancy or ensuring that mothers access maternity wards to enjoy the free services.

What that mother went through is what many women seeking maternity services endure, but influential Kenyans who can push through initiatives for better services never use public health services, thus they are far detached from public facilities and lie to themselves and to voters that safe and adequate systems are in place.

It is easy to shed virtual tears, but truth be told, Kenyan voters have enabled this rot in provision maternity services — and as long as they keep lying to themselves and cheering liars, women in labour will continue wailing and dying by the roadside.

Kenyans were keen on US polls, but what lessons did we learn to help our rotten systems at home?

Kenyans were keen on US polls, but what lessons did we learn to help our rotten systems at home?