Kerugoya-Kutus Municipality in Kirinyaga County has undergone a major transformation through Sh142 million programs being undertaken by the County Government.

The facelift program involves the construction of car parks, improvement of town streets and non-motorable ways as well as improving the drainage system in the municipality.

The projects are being implemented under the Kenya Urban Support Program (KUSP) which is a collaboration between the County Government and The World Bank.

Governor Anne Waiguru said that phase one of the program is already complete while phase two will be completed in six months’ time.

The first phase of the KUSP program involved Sh71.2 million which was used for the construction of Kutus parking spaces, construction of Kerugoya Fresh Produce Market and building a daycare center and a storage unit at Kaitheri Apparel Factory in Kerugoya.

The market has since brought great relief to about 1,200 traders who had been enduring harsh weather conditions such as rain and sun while undertaking their business.

After the successful implementation of the first phase, the county government earned accolades from the World Bank for prudent utilization of the funds hence qualifying for a second-round grant.

Kutus/Kerugoya Municipality was among the seven out of 59 municipalities across the country which met the World Bank’s minimum KUSP grant conditions hence qualifying for subsequent funding.

The second phase of the project involves the construction of car parks adjacent to Kerugoya County and Referral Hospital, upgrading of selected streets and non-motorable ways to bitumen standards as well as improving the drainage system along the highway in Kerugoya town. The project which is expected to be complete in six months has also been funded to the tune of Sh71.2 million.

It also involves landscaping of both sides of the highway from Baricho Junction to Co-operative Bank and beautification of Kerugoya County Referral Hospital frontage by planting vegetation such as grass, flowers and trees. Market sheds will also be constructed to accommodate traders who have been selling along the streets.

Waiguru noted that the facelift will benefit the town residents and traders and also improve on revenue collection for the county. It will also create jobs for around 1,000 people through the public and private transport services and improved trading activities around the areas being improved. 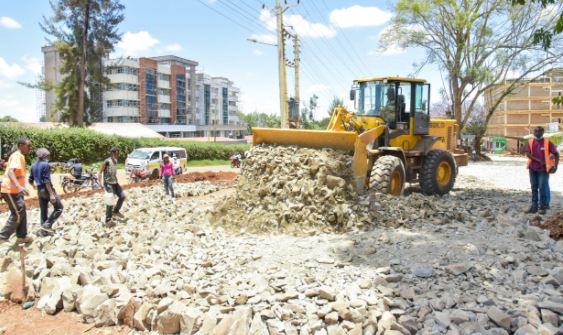 Importantly, the facelift in Kerugoya town will also improve movement of both public and private vehicles adjacent to the hospital while pedestrians will have adequate walking space hence won’t be competing for space with motorists.

Kerugoya open-air market Chairman Samuel Mwangi thanked the County Government for the new fresh produce market saying that it has provided a conducive business environment for both traders and customers. He said that before the construction of the market, traders were using umbrellas for shade which they had to change from time to time since they wear out quickly due to the sun.

He said that a good lighting system in the market also enables business transactions at night hence increasing business hours.

The market’s secretary, Janet Kibuchi, said that the market has helped women in a great way. “Some women come to the market with their children and whenever it rains they would really get concerned about exposing their children to rains and cold. So the market sheds are Godsend to our mothers”, said Janet.   She added that the hygienic standards in the market have also been raised.

Another feature that is poised to raise the standards and improve the vibrant business community in Kerugoya is the upcoming medical complex. It will see the elevation of Kerugoya County and Referral Hospital to a fully-fledged Level Five facility with all the amenities of a high-end medical facility which include an Intensive Care Unit (ICU) and High Dependency Unit (HDU), modern surgical theatres among others.

The governor pointed out that development partnership is very important in achieving the development agenda of the county and that the county government was committed to continually improve the infrastructure as an enabler to socio-economic development and improved livelihoods of all residents.  She reiterated the county’s commitment in making Kerugoya- Kutus municipality the investment hub of choice for the business community.