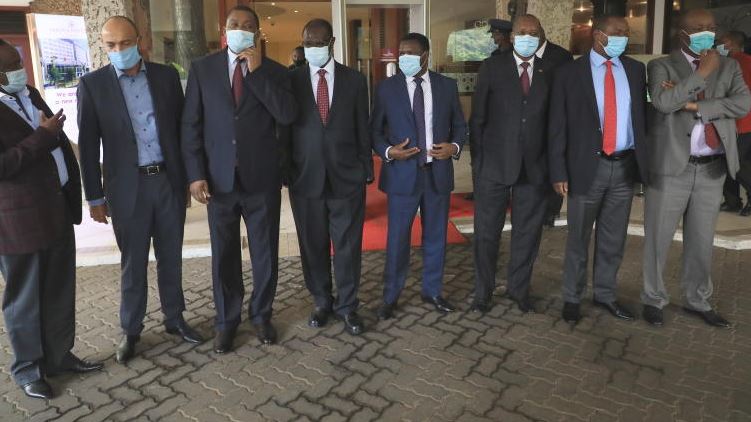 Mt Kenya allies  of President Uhuru Kenyatta have been holding secret meetings, even as they deny claims that they are negotiating about the region’s succession.

At least four meetings have been held in the last two weeks, bringing together powerful allies of the president in his backyard in what many believe to be scheming for his impending succession as the region’s kingpin.

All those meetings, apart from one held at Panafric Hotel, which had Kenneth, Muturi, Kiraitu, Kimemia, Kinyanjui, Munya, Muriithi, Njuki and Kibiru, appear to have been planned as secret affairs that the media only happened to snoop on.

This raises the question of whether they have President Kenyatta’s blessings or not.

Senator Ndwiga, who confirmed hosting his friends a week ago and on Saturday hosted senators from six Eastern region counties (Machakos, Kitui, Makueni, Embu, Tharaka Nithi, Meru) as well as Laikipia and Kirinyaga, said it was wrong to conclude that those meetings were about Mt Kenya succession politics.

“Several of my friends were visiting me then and today I am hosting several Mt Kenya senators. But we don’t discuss 2022 politics because veterans like me know that is far in the horizon. The only thing we could discuss is pushing for resources for our people,” Ndwiga said on Saturday.

“First, it is just an allegation that the president and his deputy fell out over 2022 politicking. We don’t know that for certain. Secondly, leaders meet all the time and discuss many things and the future of politics is just one of them,” he said.

Muriithi said many meetings of Mt Kenya leaders, especially under the bloc, are usually about securing the Sh2.7 trillion regional economy, terming it the “the fourth largest in East Africa”.

Since last year, the president’s political love affair with Deputy President William Ruto has been on a free fall reportedly because the DP launched his 2022 presidential bid too early.

The meetings, therefore, raise the question of whether the president’s allies are applying double standards with regards to 2022 succession politics.

Meru Senator Mithika Linturi, who was headed to the senators’ meeting in Embu on Saturday said the consultations are definitely about succession and are likely to continue whether the president gives his blessings or not.

“Uhuru’s political shelf life is known by all. It is wrong for him to assume that other leaders’ political lives are tied to his,” said Linturi, one of Ruto’s key allies in Mt Kenya.

“People will continually seek relevance and democracy requires one to regularly reinvent themselves by engaging those of a similar ideology.”

“Yes indeed we should not politic. However, we will still have some preference concerning how we would like 2022 to pan out. Peter Kenneth is my personal friend and if he succeeds in his agenda I will be happy,” said Kang’ata.

But Nyeri Town MP Ngunjiri Wambugu was clear that the president did not support the new kingpin negotiations.

“His opinion has been for everyone to focus on what is happening now; deliver on the now before 2022 and then we deal with 2022 at the right moment,” said Wambugu.

National Assembly Deputy Chief Whip Maoka Maore also said he would not join any succession talks because the president has clearly expressed himself on the issue.

“The president told us clearly during a Jubilee Parliamentary Group meeting at State House to refrain from 2022 politics until the end of 2021,” said Maore.

Political commentator James Mithika said without the president’s blessings, those holding the meetings will appear to have a suspect agenda.

“When Uhuru and his allies set out to disengage Mt Kenya from 2022 politics, they were clear that Uhuru remained the region’s kingpin,” said Mithika.

“The least we expect is an idea that anyone will again start positioning themselves for the same position.”

Mithika believes that reigning on the pro-Ruto forces has given Uhuru an opening to rebut the narrative that his backyard was starved of development, especially after the launch of the Sh30b Mau Mau cluster roads that connect Nyandarua, Kiambu, Murang’a and Nyeri.

“During the time that 2022 politicking has been extinguished, we have also in a short period rehabilitated the moribund metre gauge railway line between Nairobi and Nanyuki at Sh3b, which is now transporting cargo,” said the Igembe Central politician.

The Jubilee Party allied Mt Kenya Youth Caucus however says the talks are okay, but recommends that the conveners should get Uhuru’s blessings.

“We support Kenneth and would like to urge our key leaders, including Kiraitu, Kimemia, Munya, William Kabogo and Martha Karua to seek Uhuru’s blessings to convene more of those forums,” said the chair Linford Mutembei.

The havoc caused by the coronavirus will push countries to require more aid.

By Wainaina Ndung'u | 17 hours ago