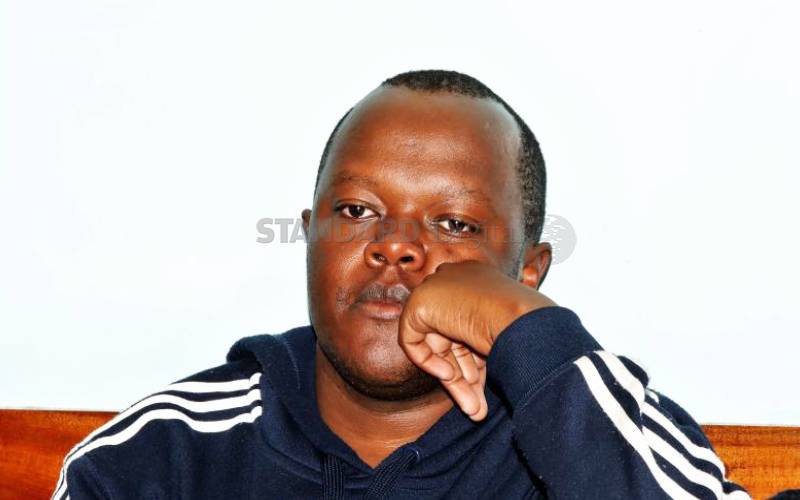 A not guilty plea has been entered for the Kenya Defence Forces officer accused of killing his wife and two children.

The bodies were discovered on November 16 buried in a shallow grave near the Laikipia Army base.

Although Major Mugure did not pronounce the words 'not guilty', Nyeri High Court judge Jairus Ngaa enterred it as so.

There was confusion when Mugure was asked to take plea, but instead told the court his conscience would not allow him to take plea before some of his issues are addressed.

According to court proceedings, any answer that is not a plea of guilt is entered as 'not guilty'.

Ngaa ordered that the pre-trial hearing in the triple murders to start on January 23.

The prosecution said any issues Mugure has surrounding the case will be duly addressed as the case proceeds.

Earlier, defence counsel Cliff Ombeta did not show up in court, prompting Mugure to seek a quick replacement after the prosecution accused them of delay tactics.

The session had to be delayed for half an hour as Mugure sought Ombeta's replacement.

Chanice was to celebrate her 11th birthday during the visit with her father, who trained as a civil engineer at the University of Nairobi.

Those who know 34-year-old Mugure, who was raised in Nairobi and attended Mwangaza Primary and Upper Hill Secondary schools, say he had a troubled relationship with Syombua.

Syombua’s mother, Elizabeth Malombe, claimed that a few of Mugure’s relatives were opposed to the union and discouraged him from getting married to her daughter.

Syombua’s friend, Farrizanah Katengu, told The Standard that Mugure had not seen his children in a long time.

“I know he had asked Syombua to get back together and she was willing because she loved him,” the source said.

Syombua, Chanice and Michael went missing on October 26, one day after visiting the soldier at his workplace in Nanyuki.

The three bodies were found tied with ropes, stuffed in gunny bags and buried in a shallow grave.

Muse Abdikadir Muse, a 21-year-old Kenyan in the United States faces up to 20 years in prison, a Sh25 million fine and lifetime probation after he pleaded guilty of supporting ISIS

By Wainaina Ndung'u | 3 days ago