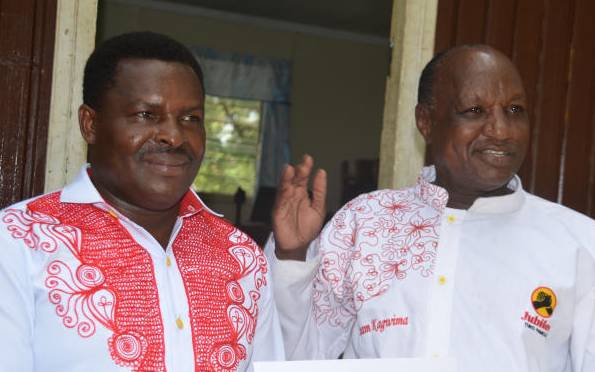 Tharaka Nithi Governor Muthomi Njuki (pictured left)  has fallen out with his deputy Francis Kagwima (right) over the sacking of some government officials. Kagwima accused the governor of sacking county officers to achieve selfish interests. He also accused his boss of using his powers to harass county government officials.

A year ago, Kagwima said, Njuki forced a senior officer in the department of procurement to go back to the national government due to harassment. The official, who later went back to the headquarters, had been seconded to the county. "The officer decided to leave because he could not stand the heat. The governor literally forced him out," he said. He said Mr Lawrence Mutembei, a director in the procurement department, was arrested and charged for receiving a bribe. He said the charge was trumped-up and a scheme to remove him.   Mutembei was cleared by the court, which ordered the county government to reinstate him. "Mutembei was replaced by a local politician's relative who was also sacked after the politician and the governor fell out. Everything the governor is doing is driven by selfish interests," said Kagwima.

He added: "The governor would carry out a reshuffle during which he leaves some officials without portfolio before they are finally kicked out of government. The latest officer to be kicked out was the chief officer for sports Mr Diego Ngugi." The deputy governor claimed the jobs of many other government staff, including drivers, were at stake. "I hear there are people who want to use the county assembly to remove me from office. They can do what they want but they should also know I can also collect signatures to have them impeached," he said. But Njuki dismissed all the allegations and asked his deputy to report any violations, for which he has evidence, to the investigative agencies. It was not clear why Kagwima opened up a year after some of the officers were sacked.