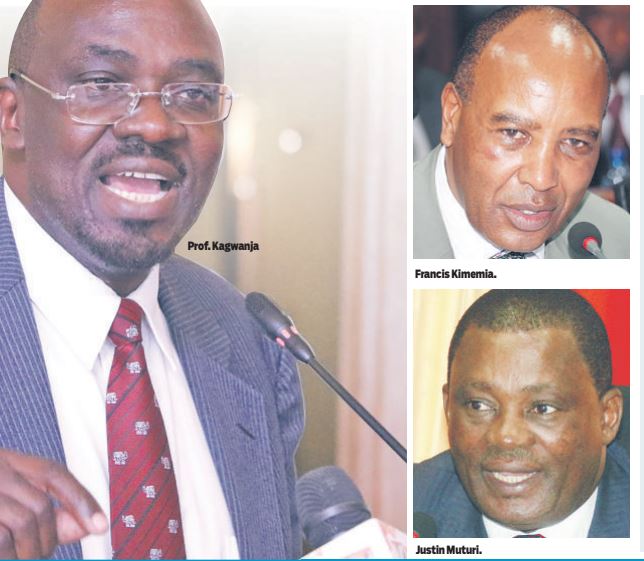 Leaders from Mt. Kenya have intensified their meetings as part of what they refer to as setting pre-2022 development agenda and asserting their right to meet, in the view of assassination allegations against Deputy President William Ruto.

The latest meeting, held last week in the capital Nairobi drew leaders from academia, civil society, politics, and religion as part of the plan to widen consultations to find solutions to some of the most pressing issues that require to be addressed in order to take the region’s development to the phase of industrialization.

The core agenda is to use development as a tool to destroy the negative politics that have become prominent in the region pitting Tanga Tanga and Kieleweke groups in the wider battle for President Uhuru Kenyatta’s succession and confusion over the promise by the region to support his deputy for presidency in 2022, which has been complicated by the handshake with ODM leader Raila Odinga.

“The promise we give to the Mt. Kenya people and the Diaspora is that the region will remain united despite the current scramble for its support,” said Prof. Peter Kagwanja, the Convenor of the Uongozi Forum, the Think-Tank that is behind the current series of meetings by leaders drawn from various sectors.

“We are going into a period when Mt. Kenya will not present a candidate for the presidency. This has triggered the current scramble for its votes.

Often, this sometimes leads to divisions and negative politics, part of what we are addressing,” said Prof. Kagwanja in an interview.

Leaders say the core idea is to ring-fence Mt. Kenya from the consequence of negative, intense politics that the region has found itself in, courtesy of being a core political stakeholder with various post-Uhuru leaders seeking its support for the presidency in 2022.

Deputy President William Ruto has intensified his plans to influence Mt. Kenya votes to his favour, a move that is facing opposition from a section of leaders, particularly because it has led to early politicking, disrupting leaders’ attention from development.

The leaders say with political power leaving the region, it will be important to leverage on the economic power as the region’s status of being the Kingmaker grows as the 2022 approaches.

The leaders see a scheme in the recent assassination allegations against the DP as part of the plan to widen differences among the local leaders and trigger the region’s submission to his interests, in a strategy borrowed from Moi’s political modus operandi.

Kagwanja recalled that in 1980 and 1981, the then Minister of Constitutional Affairs Charles Njonjo started meeting community leaders like the retired PCEA cleric Timothy Njoya.

This was not only the beginning of his troubles under the infamous tag of a ‘traitor’ but also formed the basis of the hostility of such kind of meetings involving the people of Mt. Kenya region.

The 1982 coup and the eventual Mwakenya crackdown against the political dissidents introduced self-censorship where it became normal for people would melt out when they found themselves in a crowd of for fear of being arrested for holding an illegal meeting, which caused fear and submission from the public.

But leaders say the allegations, now confirmed to have been authored by officials from the DP’s office, will not deter them from going on with the agenda whose common denominator is the economic growth for Mt. Kenya.

Peter Munya, the Cabinet Secretary for Trade and Industrialization and among those accused in the assassination plot also confirmed the meetings will continue.

“We are indeed intensifying our meetings,” said Munya. He said the meetings are now relying on intelligence from the grassroots so as to understand the exact issues that people are most in need of, to help prioritize their provision.

Francis Kimemia, the Governor of Nyandarua County also confirmed in an interview that the meetings will continue and include heavy engagement with the private sector that will drive identified investments under a public-private partnership.

Officials involved say the meetings are essentially economic in nature but as it were, economy and development cannot be divorced from politics, according to Prof. Kagwanja.

The meetings are modelled like the World Economic Forum, a non-profit global body based in Geneva, Switzerland that every year, engages the foremost political, business and other leaders to shape global, regional and industry agendas, in preparation for the 4th Industrial Revolution.

The idea, Prof. Kagwanja said, is to use the economy as an entry point to influence development in Mt. Kenya through governance, politics, security and other facets of it.

“As a convenor, I bring other co-conveners depending on what we want to discuss.” These co-conveners are experts and have immense experience in their areas of the profession.

“This is why we have a structured framework to create diversified forms of leadership to guide the region, and not just political. We do not want people to say we are doing this just because this or that political leader said so,” said Kagwanja.

“We want to recognise and entrench the concept of multipolarity of power in Mt. Kenya where power is not only political.”

The key anchor of this plan is the Uongozi Forum, the umbrella

Think-Tank of Mt. Kenya development agenda. It describes itself as; “The Uongozi High-level forum on “Shaping the Future of Regional Development in the Digital Age” in 2019.

This comes at a time when the Mount Kenya region is enduring seismic changes, but also beset with unprecedented uncertainty, fragility and controversy.

We are shifting from decades of a top-down development based on a centrist model of thinking and planning to one shaped by a bottom-up and people-based approach anchored on emerging partnerships within and between counties and national government.”

Under it, there will be several organizations and individuals driving different agendas.

The core of them is the Central Region Economic Bloc (CEREB) which is the main implementer of the final solutions by arrived at by the various groups in partnership with the private sector, whose core role is to provide financing.

The newly formed Mt. Kenya Economic Forum, which is headed by former Nyeri County Women Representative Priscilla Nyokabi is the economic panel of the initiative and a subsidiary Think-Tank of the Uongozi Forum.

Others expected to join the economic forum include economist David Ndii and Prof. Wainaina Gituro, who is the Director of Kenya Vision 2030 Delivery Secretariat among others. The forum’s council will include business moguls like the investment banker Jimnah Mbaru and industrialist Chris Kirubi among others.

Another anchor group will be the Council of Eminent Persons drawn from retired leaders in various fields including elders like former Equity Group Chairman Peter Munga among others.

The current regional political power structure under the Uongozi Forum is jointly led by Nyandarua Governor Francis Kimemia, Meru Governor Kiraitu Murungi and the Speaker of the National Assembly Justin Muturi in an arrangement that appreciates the Kikuyu, Embu and Meru communities that form the Mt. Kenya bloc.

“We are realists and therefore must capture the reality of political power in Mt. Kenya,” said Kagwanja.