A new analysis from UN Women shows that, despite women’s increased engagement in public life, equality remains far off.

For example, women serve as Heads of State or Government in only 21 countries and 119 countries have never had a woman leader; at the current rate, parity will not be reached for another 130 years. Additionally, just 14 countries have achieved 50 per cent or more women in Cabinets.

The data, prepared for a UN Secretary-General’s report in advance of the upcoming UN Commission on the Status of Women, demonstrate global trends, persistent barriers, and opportunities for women’s full and effective participation and decision-making in public life.

“These data bring home the handicap so many countries are struggling with when they don’t have a balanced decision-making process. We have seen all too clearly how the lack of women in the public sector leaves governments desperately ill-equipped to respond to crises such as the COVID-19 pandemic,” said UN Women Executive Director, Phumzile Mlambo- Ngcuka.

When more women are elected and appointed to office, policymaking is better able to meet the needs of society as a whole. Underrepresented groups such as rural women, women with disabilities, and indigenous women are also better served when they are in decision making positions. According to Mlambo-Ngcuka, transforming the balance of power is essential for solving the urgent challenges of our age, from deepening inequalities and polarisation, poverty, the climate crisis, and the COVID-19 pandemic.

However, violence against women in public life is being used as a deterrent to keep more women from gaining access to power. Cyberviolence is increasingly common and is being used to silence women in government, as well as women rights defenders and members of feminist groups.

The analysis and the recommendations for action in the report are part of UN Women’s commitment to responding to the complex problems of gender equality.

This also includes the Generation Equality Forum, which aims to accelerate gender equality actions and enable the participation of all groups of women, especially young women.

The Generation Equality Forum is hosted by UN Women, along with the governments of Mexico and France, and in partnership with civil society. 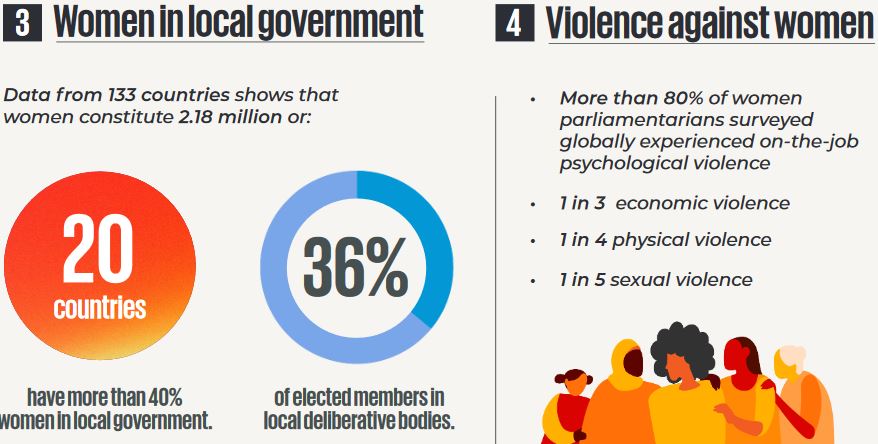