Where did the rain start beating Nairobi? 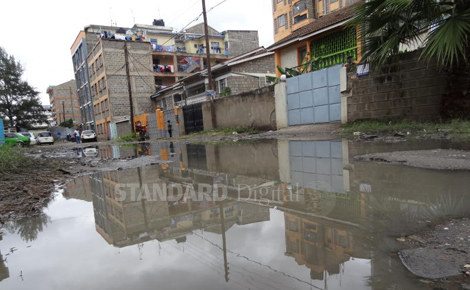 NAIROBI: When it rains in Nairobi it floods, and when it floods the city’s old sewer lines overflow; spewing smelly raw sewage onto the roads, into residential areas and worse still contaminating clean water pipes.

These are just but a few depressing issues city dwellers’ have to contend with many years on since Kenya attained her independence. These, however, could have been avoided if the city’s developments were informed by a comprehensive master plan, experts say.

Mairura Omwenga, chairman of the Town and County Planners Association of Kenya says: “It may be shocking to note that Nairobi City has no updated and comprehensive city master plan. Legally and technically, the last city master was prepared in 1948. And for the past 67 years, Nairobi has grown and developed without a clear and affirmed vision and direction.”

Omwenga who is also the chairman of the AAK Town Planners Chapter argues that since 1952 when Nairobi received its charter, it has grown into a major city in the region.

“The growth and expansion of the city has however faced major challenges mainly because of poor development planning strategies and policies,” he points out.

In their article titled Capital Cities in Africa, Samuel Owuor and Teresa Mbatia argue: “Nairobi is in many ways an archetype of the African colonial city, having purely colonial origins, which shaped its structure and management at the time of Kenya’s transition to independence.”

“In its master plan, the city was divided into racial segregation zones. The Europeans were to live in present day Muthaiga, Westlands, Lavington, Kileleshwa, Kilimani and Karen; the Asian population was restricted to Ngara and Pangani; and the African workers lived in Eastlands – Kaloleni, Makongeni, Shauri Moyo and Ziwani. Nairobi was to develop as a predominantly European colonial city of 3-5 kilometre radius and with about 50,000 people. The African city population was restricted to authorised manual workers from rural areas,” Omwenga explains.

It was only after the end of colonial rule in 1963 when Africans started moving into the city freely. With the unprecedented population growth, Omwenga observes that Nairobi immediately required a new city master plan as an African city. However, this never happened.

“While rural-urban migration became uncontrolled; the available housing failed to meet the demand; the supply of services became overstretched and employment opportunities became limited. As a result informal settlements like Mathare and Kibera expanded rapidly, as the formal housing stock was too expensive and not available,” he explains.

In order to address the emerging challenges, in 1973 the Nairobi City Council commissioned the Nairobi Urban Study Group to give recommendations on the zoning of the city. Samuel Owuor and Teresa Mbatia argue that the 1973 study recommendations were never fully implemented and that the study did little to curb land speculation, and development proceeded in an uncontrolled manner.

The Nairobi Urban Study Group (1973) was to project and give recommendations for the future of Nairobi in the next 30 years.

He adds that, “These zonal short term plans have not given effective planning and development control guidelines. The plans have only responded mainly to the need for increased housing development density but failed to give clear direction on other development demands such as the manufacturing industry, commerce, community and social services, transport and infrastructure services.”

He argues that, “The different zonal short terms are not integrated and fail to give clear development guidelines on plot ratio, plot coverage, building height, building lines, access and road expansion.”

Echoing Omwenga’s observations is Collins Kowour a quantity surveyor who argues that uncontrolled developments in parts of the city like Upper Hill, Lavington and parts of Karen, once a purely residential area but now rezoned to a mixed user space, has seen access roads, sewer systems and other public social amenities overstretched.

Walter Ochieng’, a public health expert from Moi University on the other hand argues that, the challenges facing Nairobi are not unique but similar to those facing many cities in developing economies that inherited a colonial master plan that did not anticipate poor governance, unskilled workmanship, an uncontrolled birth rate, regional integrations, rapid industrialisation and poverty.

He observes: “In the 80s and early 90s Nairobi had an organised waste management system; solid waste within the city and in estates had distinct disposals sections,which were frequently emptied by council garbage collection trucks.”

“Today, this is not the case. Solid waste management has been left in the hands of residents, and waste is often collected by youth groups at a fee; this has contributed greatly to the garbage menace in the city,” he adds.

Even though several sector master plans have been developed over the last 40 years, by either the former City Council of Nairobi or national government departments, very little has been achieved experts now observe.

“These sector master plans are useful in responding to specific service needs in the city. Unfortunately, many of these sector plans have not been effective as they are not integrated within the approved city master plan,” Omwenga states.

“Co-ordination in planning and implementation among the various city departments and national government departments has also been poor. Adequate resources have also not been allocated for their implementation,” he says.

Investors bet on student rentals as varsities increase in Kenya

In the recent past, the growth and expansion of university education has been fast. In many major towns, there has been a rapid increase in the number of these institutions and interestingly, many more are still looking for space to open shop.