I’ll not apologise to Uhuru, says a defiant Wahome 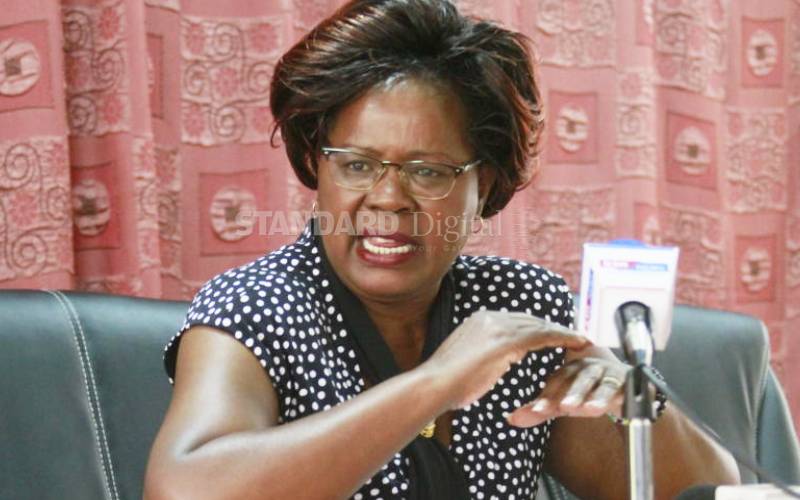 Kandara MP Alice Wahome has stood her ground in the face of criticism after she accused President Uhuru Kenyatta of trying to cling to power.

Speaking in Malindi, Ms Wahome (pictured) said she would not be silenced by her critics.

She accused Uhuru of plotting to cling to power using the Building Bridges Initiative (BBI), and described ODM leader Raila Odinga as the president’s “mercenary” in the plot.

She has since faced a barrage of criticism from Uhuru and Raila’s allies.

“I have been criticised and threatened because of speaking my mind. I will not allow to be intimidated. God and Kenyans are on the side of truth,” Wahome said.

The legislator said it was her democratic right to reveal what is ailing the nation without fear.

Wahome, who is the chair of the Inua Mama movement, said she has been approached by many people asking her to apologise to the president.

“For the last two days I have made headlines after speaking about the president. When his term comes to an end, he should let others take over,’’ she said.

She said that freedom of speech is entrenched in the Constitution, and Kenyans have a right to it.

“If you say there is famine, terrorism, economic challenges, financial constraints or business problems in the country, you have a right to speak your mind,” Wahome said.

Meanwhile, Wahome’s supporters in Murang’a were yesterday morning prevented from holding a press conference to support the legislator’s remarks on Uhuru. Kandara youth leader Laban Thuo had called the meeting when another group of youth showed up and refused to let him speak.

The group led by two other youth leaders - Alex Mbote and Julius Mwaura - said they would not stand further disrespect to the president.

Mr Mbote dared Wahome’s supporters to proceed with the meeting, threatening them with consequences.

“It should go on record that if Deputy President William Ruto is interested in Mt Kenya region votes, he should first consult the president,” said Mbote.

The youth vowed to defend Uhuru from false accusations.

“Wahome should not try to divert attention from her poor development record. It emerged that toilets at Karigu-ini primary school where the funeral service for the late Charles Rubia was held were in a poor state,” said Mbote.

Mr Mwaura said politicians in the region must respect the head of State who has initiated many development projects.

Earlier, two other youth leaders, James Kamau and Kibugi wa Mwangi from Maragua, defended Wahome, saying she was right, especially on the poor state of the econom

By Patrick Muinde 2 days ago
Politics
Premium A memo to MPs: The stars do not favour your extra benefits push