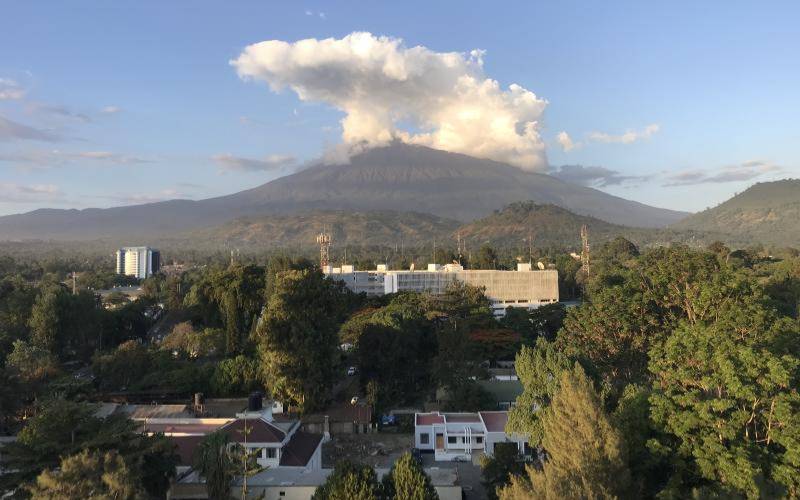 The view of Mount Meru from one of the tall buildings in Arusha is breathtaking, more like Mt Fujiyama in Japan. The headquarters of the East African Community is inserted in the leafy suburb with red “Christmas trees“ in bloom.

Arusha is a welcoming medium-sized city; it easily makes you feel at home. Its suburbs quickly turn rural with farmlands awaiting rain. That was my observation as I made my way to Masailand lodge, newly built with rooms that rival houses.

Along the way, I noted the use of bricks in house construction, just like in Uganda and Rwanda. Why do we avoid bricks in Kenya?

I took a morning walk from the lodge to see the day break and I met children going to school without masks. Private schooling, it seems, is on the rise going by the number of school buses that I saw. Unlike in Kenya, anyone I met on my walk greeted me.

Arusha is clean and lively, with a nightlife that would put Nairobi to shame. I tried to find out the truth with night visits to two joints. I made a few observations.

The beer names are sources of national pride, with Kibo, Kilimanjaro and Serengeti (I found Virunga in Rwanda). We should name our beer as such with Mt Kenya, Happy Valley or other famous landmarks. These observations have nothing to do with my affinity for alcoholic drinks.

I noted that smoking sheesha is still allowed. It costs about Tsh15,000 for a puff, I was told. I did not try it. Loud music is the pride of entertainment, so loud that you can’t hear each other in the clubs.

One thing about nightlife in Tanzania is that security is the last thing to worry about. I did not see as many policemen and security guards as in Kenya, unless they are secret.

Banana is a staple but chips mayai and karanga mayai were something else. I was told Arusha is the home of nyama choma in Tanzania, I sampled it and was not disappointed.

The day life looks slow compared to Nairobi. There are few hawkers on the streets. Handcarts, such as in Mombasa, are pushed, not pulled like in Nairobi. Businesses prefer Swahili names to English. For example, ‘wakala’ for agent. Two business names left me perplexed; ‘Mama Samosa dry cleaner’ and ‘Donald Trump butchery’.

And I noted that on average, Tanzanians seem happier than the stressed Kenyans. It does not matter their economic status. This set me thinking: have we pushed capitalism too far in Kenya? I thought being happy is everyone’s dream. If Tanzanians are happier than us, does it make sense to say we are better than them economically?

I am always impressed by how Tanzanians are cultured - like Ugandans or Rwandese - carrying themselves with respect all the time and putting each other before money. The level of honesty seems higher. One taxi driver surprised me after dropping us at a joint: “You can pay me when I come to pick you later.”

Tanzania has solved her social problems espoused by tribalism in Kenya. The economic problem is easier to solve. It is no wonder I didn’t see desperate people on the streets or slums. At micro level, it seems Tanzanians are better than Kenyans. Dispute that if you wish and provide evidence.

The human cost of our development is high as we leave the vast majority behind. Money seems to define everything to us.

We have said before that Kenya is like a vase, with lots of money at the top and bottom because of numbers. The middle class is squeezed, trying to catch up with the top or fearing dropping down to the poor. That fear does not seem to haunt Tanzanians, where I was told an acre of land can cost only $70 (Sh7,840), as long as you are a citizen.

Kenya’s economic model is capitalism without a human face, we see that on the streets and newspaper headlines. Luckily, the emphasis on welfare by the Jubilee government, with the elderly getting Sh2,000 per month, and the Sh6,000 for the unemployed proposed by Raila indicate that our capitalism is finally being tempered, humanised.

Anytime I visit neighbouring countries, particularly Uganda, Rwanda and Tanzania, I am always reminded that Kenya is emotionally a very violent country. Where did we take our respect, our ‘utu’?

Finally, can we twin Nairobi with Arusha by a dual carriage road or high-speed rail? It would offer an alternative to air travel, with Kilimanjaro International Airport so far from Arusha. That would help unlock the potential of this lovely city.

Fearing that this could as well be a witch hunt by someone he had spurred with several times, Ndung’u frantically sought help from KPMG International.

The judge also dismissed orders seeking to restrain the Senate from interfering with the miller’s receivership by summoning the receiver-manager.

By Robert Maina | 11 hours ago

By Alvin Mosioma | 18 days ago

Reframing technology’s role in education for future of work
Feedback