Why Kenyans find it hard to say ‘thank you’ 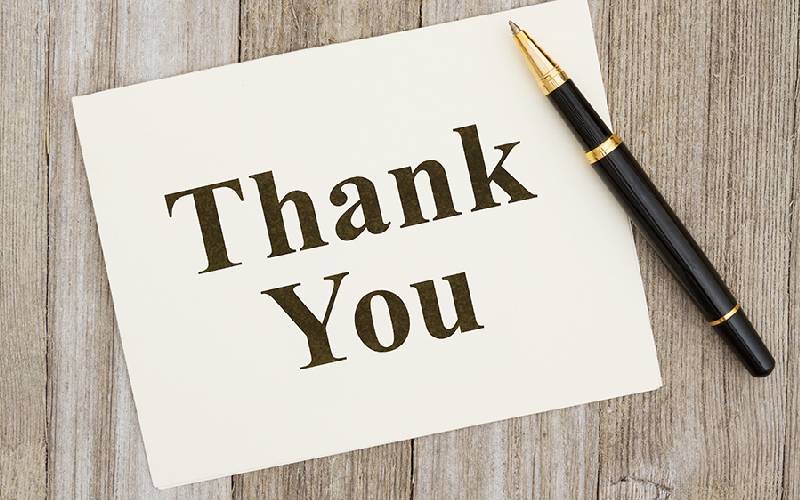 Does our local culture find it difficult to appreciate others, even though our religious teachings such as the Bible encourage thankfulness to both God and man?  Looking at our media, it seems there is little Kenyans are grateful for.

Our newspapers are replete with listings of all things going wrong in Kenya. Are there no things going right and which make us proud to be Kenyans?

Even when Kenyans win medals at the Olympics, we still concentrate on corruption cases among the Olympic committee members and pay little attention to the good performance of our athletes!

Admittedly, it is not good to ignore what is going wrong. If you ignore, you will have no prayer requests to God. It is important that one sees both sides of an issue.

Indeed, when praying, one should begin with thanksgiving before making requests. What should Kenyans be grateful about? And then what should they be criticising and praying for?

Let us start with a conceptual and philosophical approach. In terms of the way we live, thanksgiving is supposed to be in the vocabulary of all ethnic groups.

The Kikuyus word for thank you is gucokia ngatho. That is a sentence for the word thanks. Because it is a sentence, they prefer thengiu, the word they bastardised from English. The Kambas also say thengiu.

Thus culturally, we are not inclined to say thank you.

This is due to our culture’s spirit of entitlement. So, when you give me a cup of tea, I feel entitled and hence no need to say thanks.

With an entitlement mentality, it surprises us when we interact with people from other countries who seem to say thank you even over matters we consider small.

In other cultures, at the slightest thing, you say thank you. Also, their languages are rich in words of appreciation. That is why we copied the English word...thengiu.

Is it primitivity? Might it be as cultures advance, people learn to appreciate others, rather than feel entitled to all we get from them?

Combining that cultural issue with our politics, our politicians fight each other instead of discussing differences in ideology.

Similarly, we develop a culture of over-criticising others, never acknowledging anything done well. This may be why the government asks the opposition to tell them what to do instead of always criticising what they do.

Once we are used to criticising and pulling others down in politics, we transfer it to ourselves and the way we deal with each other.

It makes us feel terrible, depressed, as if we are not achieving anything. We have no hope even when some things are going on well.

Thus the reason for ungratefulness and entitlement spirit is our philosophy, or cultural background, which affects our world view.

This has influenced our politics, our media and the way we deal with each other. The media also behave like the community the journalists are from. Many writers are young. If a writer is 24 years old, by the time Kibaki came to power, they were hardly politically alert.

One can then be forgiven if they think that our inflation is now terrible since they have nothing to compare with, such as our history of 1992-93.

John Ng’ang’a is an alumnus of the International Leadership University, a leadership consultant, author and chair of the board of Ethical Leadership Network. [email protected]

We live in the information age, and being able to communicate effectively is, perhaps, the most sought-after skill today.

Sector now depends on corporate clients and late-night revellers. Despite shrinking revenue, the cost of operations has been on an upward trajectory.

By Gerald Lepariyo | 8 days ago

By Nashon Okowa | 8 days ago

By James Ombogo Onditi | 12 days ago