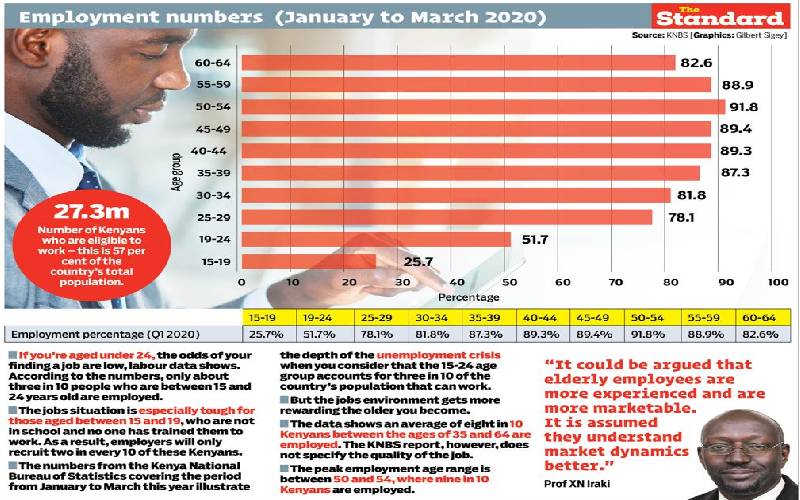 If you’re aged under 24, the odds of your finding a job are low. Labour data shows an average of three in 10 people who are between 15 and 24 years old are employed.

Narrowed down, the jobs situation is especially difficult for those aged between 15 and 19, who are not in school and no one has trained them to work. As a result, employers will only recruit one out of every five of these Kenyans.

The numbers from the Kenya National Bureau of Statistics (KNBS) covering the period from January to March this year illustrate the depth of the unemployment crisis when one considers that this age group accounts for three in 10 of the country’s population that can hold a job.

On the flip side, the jobs environment gets more rewarding the older one becomes.

The data shows an average of eight in 10 Kenyans between the ages of 35 and 64 are employed. The KNBS report does not specify the quality of the job, however.

The peak employment age range is between 50 and 54, where nine in 10 have jobs.

“It could be argued that elderly employees are more experienced and are more marketable,” says XN Iraki, an associate professor and Fulbright scholar.

“It is generally assumed that they understand market dynamics better and could make fewer mistakes than inexperienced youth.”

Investors put their cash into government securities, a situation that saw the inter-bank rate rise to 4.53 per cent