How Tuju lost his multi-billion empire in failed investment 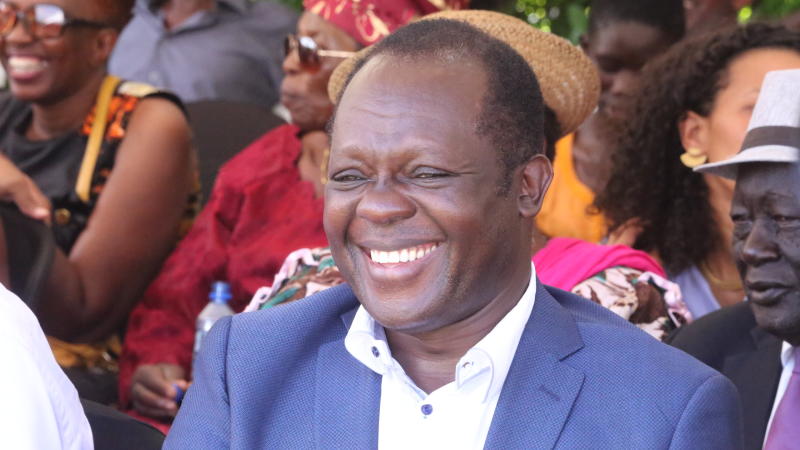 Raphael Tuju (pictured), one of Kenya’s big-money politicians, is broke. A Sh933 million loan that the self-made billionaire took five years ago to expand an already vast empire has turned out to be the proverbial poisoned chalice.

Court documents show how the Jubilee Party Secretary General’s confidence may have erred. Mr Tuju offered one of his prime investments, Dari Ltd as security but something went horribly wrong.

Instead, on Monday the courts placed the business’ operations, Dari Restaurant and the Entim Sidai resort in Karen, under receivership. It is a case that has dragged in three of Tuju’s children, who are Dari Ltd co-directors.

The 2015 loan has since snowballed into Sh1.6 billion debt – including the principal amount and accrued interest – and now threatens to gobble up two of the Cabinet Secretary’s prime properties worth an estimated Sh1.8 billion.

It did not take long for things to go wrong after Tuju signed on the dotted line, accepting the terms of the credit facility from the East African Development Bank (EADB).

The two had come to a mutual agreement that should there be a default, Dari Ltd would immediately be placed under receivership. Tuju tried to backtrack on this deal when things came to a head last year. This backfired.

In court documents, EADB said less than two months after it deposited Sh913 million into Dari’s accounts in July 2015, it sent out a reminder to the business’ directors on the consequences of default.

Tuju’s plan was to use the money to build a 30-room home that he would then sell to retirees. The former journalist identified a 94-year-old Victorian bungalow in Karen for this project, dubbed the Karen Retirement Home, and paid Sh100 million for the upmarket property.

When the first interest repayment fell due in October 2015, Dari paid. But this became the only payment EADB would receive from Tuju’s company.

The lender was to extend an additional Sh294 million for the construction of residential houses on a different Tuju property. In court, EADB averred it had agreed to disburse the money after Tuju met certain conditions – one of them being that the first phase of the retirement home project be completed successfully. It was not.

But in his defence as to why he did not meet the repayment schedule, Tuju said he was hampered by EADB’s failure to disburse the additional funds. He said he had planned to use this money to build residential homes for sale and repay the initial Sh933 million loan from these earnings.

However, the lender said it could not remit the money as the conditions for receiving it had not been met. In its submissions in court, EADB added that it had not committed itself to disburse the money; it was not a mandatory requirement of their deal. This means Tuju would have been banking on money that was never his, to begin with.

Additionally, Dari and Tuju had tried to find a way around being denied that second tranche of funds.

In September 2015, Tuju’s lawyers wrote to EADB, asking it to hand back the title to a Masaba Road property that had been used as collateral for the second tranche of funds.

In their communication, they said they were in a position to get the money from a different lender and no longer needed the Sh294 million.

They noted that: “the initial phase one (Karen Retirement Home) was becoming more attractive to potential buyers”.

It has also emerged that back when they were negotiating terms, EADB and Tuju agreed that should there be a dispute on the loan, the matter would be arbitrated in any of the foreign countries that can make a legal decision that would be binding in Kenya.

In December 2018, the lender called this clause into effect and went to a London court to have Dari Ltd and the loan guarantors – Tuju, his three children and their S.A.M Company – compelled to repay the money borrowed.

A year earlier, on December 14, 2017, EADB had written to the five guarantors asking them to make payments on the loan after it became clear Dari would not meet its end of the bargain.

In London, a ruling was issued against Tuju by Daniel Toldano, a senior lawyer and judge of the High Court of Justice, on July 18, 2019.

Tuju’s appeal of this decision at Her Majesty’s Court of Appeal two months later was dismissed by Lord Justice Leggatt.

This dealt a big blow to the Cabinet Secretary’s attempts to delay the beginning of the end of his empire.

In his appeal, Tuju accused EADB of engaging in predatory lending – a shylock-like behaviour where a lender deceitfully entices, induces and assists a borrower to take a loan that carries high fees. The motive for such behaviour is normally to elbow out the borrower from his or her business.

At the heart of Tuju’s argument was the decision by EADB to fail to disburse the entire Sh933 million (it sent Sh20 million less), and the lender’s failure to approve the Sh294 million in additional funds.

This, Tuju said, precipitated a financial crisis for Dari.

Tuju said the bank refused to approve the disbursement of the second tranche of funds because it wanted additional security. However, his lawyers said the collateral that the lender wanted, the property on Masaba Road, had a charge from Bank of Africa.

EADB was also accused of frustrating Dari’s efforts to get financing from elsewhere, which left a hole in Dari’s books. This included a loan from KCB, which was to be used to restructure EADB’s loan.

Tuju was not satisfied with Mr Toldano’s decision, and it is a position he would hold on to even after the Court of Appeal in the United Kingdom dismissed his case in entirety. His lawyers pursued the same line of argument in local courts where the two parties engaged in another round of suits and counter-suits.

Tuju was particularly dissatisfied by the fact that the proceedings were done in his absence and that Toldano, who also doubled up as an advocate, was acquainted with one of EADB’s lawyers.

Arguing that this was not the case, EADB said the best place to raise this issue was in Britain. Tuju failed to do so during his defence.

Consequently, both Lord Justice Legatt and High Court Judge Justice WA Okwany ruled against Tuju. They found that EADB had a right to file its case in the UK, and the decision could be enforced in Kenya.

Legatt instead blamed Tuju for putting up “a skeleton argument”.

“The judge (Toldano) did not conduct a mini-trial: the appellant fails to identify any issue of fact or law which could not properly be decided on a summary judgement application,” said Legatt while dismissing Tuju’s appeal.

In the summary judgement, the judge continued to poke holes in Tuju’s case, finding that he had presented a weak case.

“Mere general assertions that further investigation of the facts and evidence was needed fall far short of providing a ground for appeal,” said the judge.

Legatt must have borrowed from the Swahili proverb, ‘dawa ya deni ni kulipa’, when he told Tuju: “This is a straightforward claim to recover money owing under a loan facility agreement to which, for the reasons given in the judgement, there is no arguable defence.”

In the end, when the London case moved to Nairobi for enforcement, Tuju’s lawyers found themselves engaging not in an adversarial legal bout, but in shadow boxing.

Report shows the harsh economic reality as 500 other Kenyans can no longer boast of being dollar millionaires.