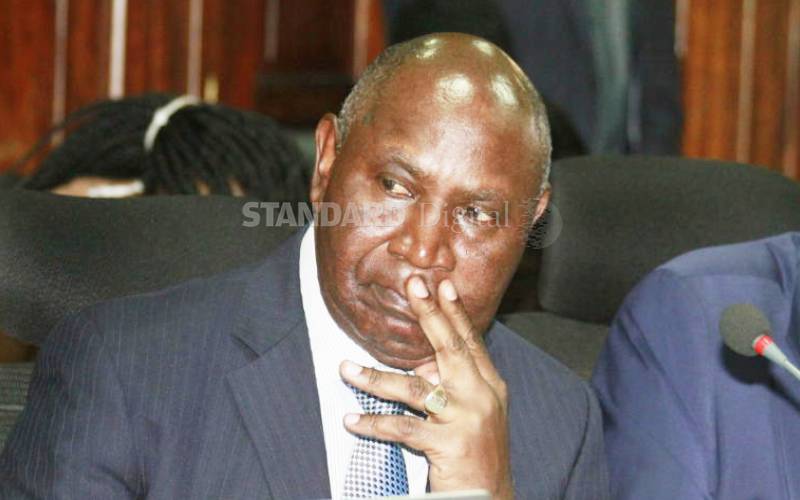 Former Auditor General Edward Ouko is still maintaining his silence on the Sh250 billion Euro-bond probe slightly over a month after he left office.

In an interview with The Standard, Mr Ouko who rattled the Government after claiming that the receipt and spending of the sovereign bond needed to be properly ascertained, is still cagey to reveal his thoughts on the Bond.

The Jubilee administration has maintained all the money raised from the Eurobond was properly spent.

Despite the criticism, and even failed attempts to oust him from office through a parliamentary process, Ouko still insists he achieved what he was set to accomplish amid many obstacles.

He said he had no regrets during his tenure in office. “I delivered my mandate with the resources that were available to me,” the former auditor stressed.

His audit reports touching on the Presidency, State House, ministries, county governments and parastatals saw him face accusations of conducting a witch-hunt against the powerful office bearers.

During the interview, Ouko was careful not to speak on his shaky relationship with the Government, refusing to comment on specific audits.

All he did was summarise his tenure in office by making reference to the late Nobel Prize winner Wangari Maathai’s story on the humming bird.

“Being the Auditor General of Kenya has had its challenges. But its most fulfilling aspect is achieving the little that one can and creating positive change with it, like Prof Maathai explained in her story of the humming bird,” Ouko said.

He added: “Maathai narrated that once there was a forest that was burning. All the animals left as the forest burned. Even the elephants were helpless. But the humming bird decided that it can do something. It ran to pick some drops of water to put off the fire. My story has been the same as that of the humming bird. I was doing something to respond to Kenya’s challenges.”

Nevertheless, he acknowledged that he had his highs and lows in office. Among his high points was releasing numerous audit reports.

“There are so many audits that I did in my eight years in office. Those audits informed Kenyans why accountability is important,” Ouko explained.

By his demeanor during the interview, the former State auditor exuded confidence that he put up structures which enabled his successor to continue putting public office bearers on their toes in a credible manner.

“Structures are already in place and the office is fully automated. Even the audit system has been digitised,” he said.

Ouko opined that auditors in the current era should not only focus on financial audits, but on performance audits as well.

He said this is because auditing has gone beyond finances, and is now focusing on effectiveness, efficiency and the economy.

“A lot of emphasis is now being put on value for money and performance,” Ouko said.

He lauded Justice Chacha Mwita’s ruling on the Public Audit Act, which declared some sections of the law unconstitutional.

The sections include one creating the position of a Deputy Auditor. Ouko also concurred with governors on the need to split the Integrated Financial management Information Systems (Ifmis) between the National government and counties.

“I think it is the way to go. The governors’ proposal for a referendum is good and I support it. This will address the confusion faced by counties’ in terms of accessing funds and the Ifmis print outs,” The former auditor said.

He noted that it is time for the Government to consider the well-being of its citizens.

By Paul Kangethe | 20 hours ago