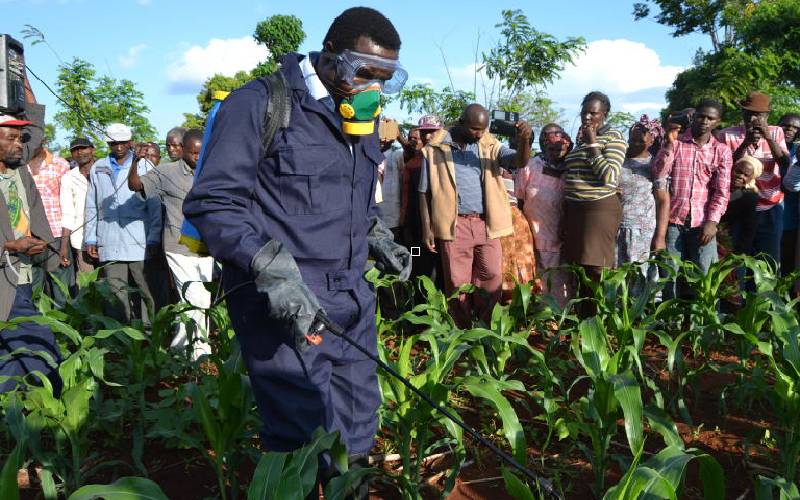 The county agriculture department has procured chemicals worth Sh15 million to fight fall army worms reported to have invaded maize plantations in some parts of the region. Army Worms, Chemicals Uasin Gishu

The county procured the chemicals through emergency funds and is also seeking support from the national government in the fight against the destructive pest.

Agriculture Executive Samuel Yego said sporadic cases of fall armyworms have been reported in Moi's Bridge and Turbo regions of the county.

“There is a sporadic invasion of fall armyworms in maize fields and we are taking early precautions in sensitising farmers on the need to report promptly to extension officials. We have also procured spraying equipment and chemicals to prevent attacks,” Yego told The Standard in Eldoret.

Mr Yego expressed fear that unless early steps are taken to prevent spread of fall armyworms, effects on maize plantations would be devastating.

The CEC said his department has rolled out sensitisation meetings where agricultural extension officials will reach out to farmers in all maize growing areas including Kapseret, Moiben, Ainabkoi and Kesses.

Local farmers Kiprop Cheruiyot and Kipchumba Kemei from Tapsagoi in Turbo expressed fear that the erratic rains may aggravate effects of the fall army worms.

Mr Kemei appealed to the national government to consider providing subsidy on chemicals used to control the pests.

“Pesticides for fall armyworm control are too expensive. The Government did not provide fertiliser subsidy in the current year and if farmers spend more on chemicals, maize production costs will be too high thus denying producers good returns,” added Kemei.

Meanwhile, maize farmers in Bomet and Kericho counties are staring at another round of loses due to the resurgence of Maize Lethal Necrosis Disease.

The symptoms of the disease, which was first reported in Chepalungu in September 2011, include drying of leaves leading to premature plant death, malformed ear and rotting cob.

The viral disease can result in up to 100 per cent yield loss.

Federation of Kenya Employers (FKE) says the levy is among the policy changes that are bound to stifle economic growth.