NAIROBI, KENYA: President Uhuru Kenyatta is on a busy four-day visit to Mauritius aimed at boosting economic, cultural and social ties between the two nations.

Upon his arrival on Tuesday, April 9, the president was received by Mauritius Prime Minister Pravind Jugnauth, inspected a guard of honour mounted by a detachment of the special mobile force of the Mauritius police service followed by a 21-gun salute. 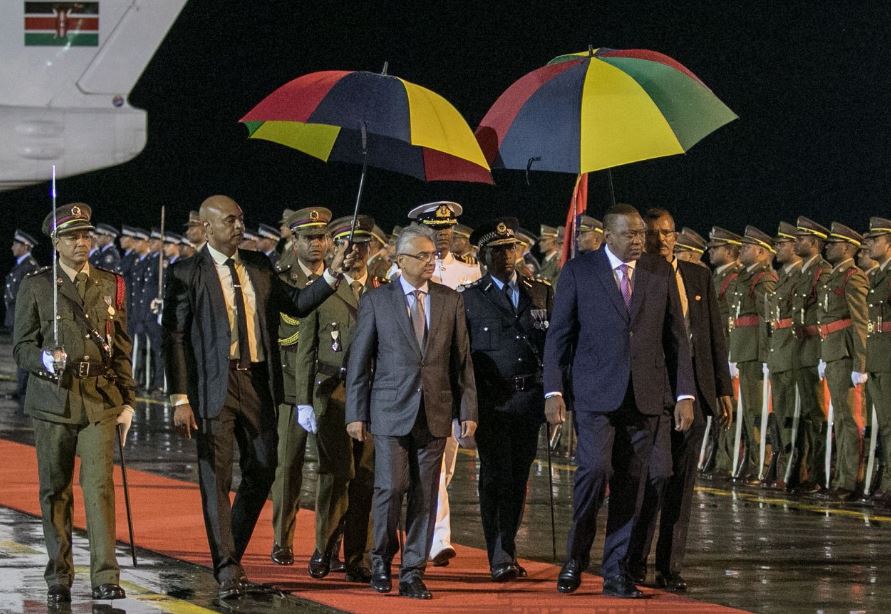 He also held talks with with Paramasivum Pillay Vyapoory, acting President of the Republic of Mauritius on April 9

On Wednesday, April 10, the president held a meeting with the Pravind Jugnauth, Prime Minister of the Republic of Mauritius, at the New Treasury Building in Port Louis.

The President said his visit to Mauritius offers a great opportunity to strengthen the brotherly ties that exist between the two nations.

During the bilateral talks, President Kenyatta and PM Jugnauth witnessed the signing of several agreements including the Double Taxation Avoidance Agreement (DTAA); an Investment Promotion and Protection Agreement (IPPA); and an MOU on Cooperation for the Development of Special Economic Zones (SEZs) and Export Processing Zone in Kenya.

Other fruits from the bilateral discussion also include the lifting of a ban on avocados, baby carrots, baby beans and broccoli.

On Wednesday, April 10, the president toured the historical sites; Aapravasi Ghat in Port Louis. In 1934 the British selected the Island of Mauritius as the first site for what was called ‘the great experiment’ in the use of ‘free’ labour to replace slaves.

The buildings of Aapravasi Ghat are among the earliest explicit manifestations of what was to become a global economic system and one of the greatest migrations in history.

On the same day, the president also visited the Le Morne Cultural Landscape; a rugged mountain, which was used as a shelter by runaway slaves, maroons, through the 18th and early years of the 19th Centuries.

The oral traditions associated with the abandoned slaves have made Le Morne a symbol of the slaves’ fight for freedom, their suffering and sacrifice, all of which have relevance to the countries from which the slaves came.

The leaders reiterated the need for Kenya and Mauritius to cultivate stronger bilateral ties for the mutual benefit of both countries. President Kenyatta noted that the strength of Africa is in the unity of her people.

On Thursday, April 11, President Uhuru visited Natech Medical Device Manufacturing facility in Port Louis. The facility uses the latest technology to manufacture, package and export innovative devices to over 35 countries across the world. The devices include angioplasty balloon catheters intended for interventional cardiology, interventional radiology, gastroenterology and urology. The President extended his request to the company to consider setting up a similar facility in Kenya to help the government achieve its objective of offering affordable quality healthcare.