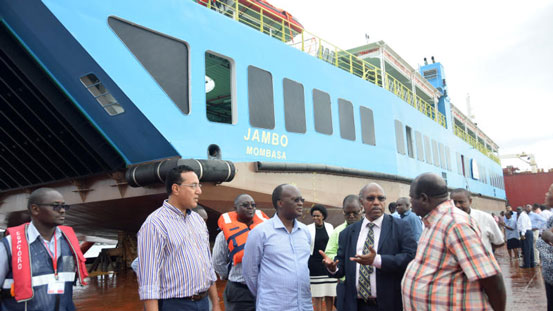 MOMBASA, KENYA: The new ferry at the Likoni channel is safe, the Government has said.

Transport  Cabinet Secretary James Macharia dismissed rumours that MV Jambo, which he launched on Saturday, was not safe for use.

"The new ferry has been certified by an internationally accredited body and I want to confirm to you today that the new ferry is safe for use and the rumours about its safety are not true," said Macharia.

Yesterday, the commuters crossing the Likoni channel used the new ferry for the first time.

The ferry has the capacity to carry 1,500 commuters on a single trip and multiple vehicles.

It was built in Turkey at a cost of Sh2 billion.

The new ferry that is 80 metres long has an upper deck for commuters and a lower deck that accommodates vehicles.

The ferry has two rescue boats attached to it and CCTV cameras and special seats for physical challenged persons and pregnant women.

The High Court in Mombasa had earlier issued an order temporarily restraining the Kenya Ferry Services (KFS) from conducting sea testing of the ferry.

"The economy of Mombasa will be changed with development, not words that seek to criticise every government move," said Balala.

The Transport CS called on the management to ensure that the ferries are well maintained so that they do not keep stalling, as has happened in the past.

"A lot needs to be done, especially the maintenance of the ferry to avoid the stalling that was experienced in the past," said Macharia.

He said in the next three months, the government would launch cable cars to ease congestion at the channel.

Macharia said plans are underway to build a bridge across the channel as one of the projects that seek to boost tourism.

"Within three months we shall start construction of cable cars, each of which will carry 20 people. We will also build a bridge to open up Likoni to the main island," said Macharia.

Balala said the new ferry is three times faster than all the five older vessels.

He added that it would boost tourism by reducing traffic and the time taken for tourists to cross the channel.

The chairman of Kenya Ferry Services, Ramadhan Seif Kajembe, said the coxwains would receive specialised  training in Turkey to enable them to operate the new ferries.

"We thank the Government for giving us financial support to acquire these new crafts," he said.