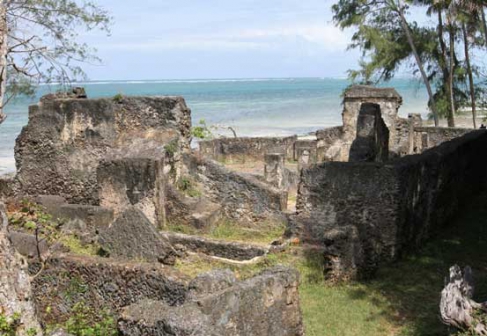 KILIFI, KENYA: One of Kenya's oldest mosque relics on the Kenyan coast is falling into ruins from strong tidal waves and effects of global warming on the Indian Ocean.

The Grand Mosque, part of attractions at the 500 year old Jumba Ruins in Mtwapa , Kilifi County has started to crack and chips of its foundation washed away by sea water waves. Archeologists say the mosque was built in the 1500s by local Arab muslims.

Already the National Museums of Kenya (NMK) has sounded the alarm that strong tidal waves caused by a warming planet are putting iconic and historical sites across the coastline at great risk.

A spot check by The Standard at the monumental site on Thursday revealed that sea erosion had eaten into the foundation and parts of the ruined mosque.

And, Mudzomba said that the site is a popular location for locals and foreigners alike but has in the recent past seen a decline in visitor arrivals.

Remedial proposals include the construction of proper traditional sea wall which will be designed and constructed along the seashore of Jumba Ruins with a length of 92.57 metres long.

In an earlier interview , Dr. Purity Kiura who is in charge of the directorate of antiquities, sites and monuments said that heritage sites and landmarks like the Fort Jesus in Mombasa, Vasco Da Gama Pillar (Malindi), the Old British Customs House (Vanga) are also at risk of being lost to the sea because of coastal erosion.

'These entire historical and cultural sites along the shoreline enlisted by Unesco for their outstanding universal value now face perilous and uncertain future due to rising sea levels' she said .

Kiura expressed concern that rising seas fueled by melting glaciers and ice caps threaten to swallow the coastal landmarks and highlighted the losses to the tourism industry should the sites fall victim to a warming planet.

She said the historical sites which are also the country's greatest tourist attractions are under threat from coastal erosion that is chipping away at platforms that have supported them for hundreds of years. 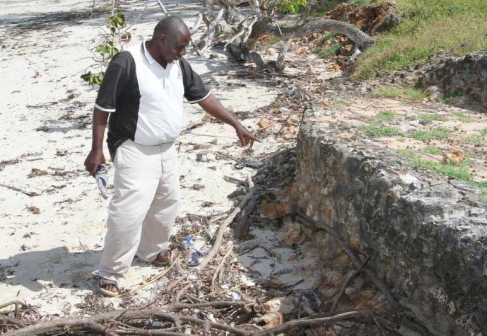 ''Climate change is here with us and affecting world heritage and iconic sites and Kenya is no exception' said Dr. Kiura who called for more resources to shield the heritage properties from falling into permanent ruin.

She added 'we are doing everything possible to fortify the historical and cultural edifices along the coastline to ensure they are not washed away and preserved for the sake of posterity'.

Dr. Kiura announced that NMK has set aside sh50 million towards the conservation of the Jumba Ruins where a large part of the historic settlement has already been eroded because of wave action.

She said the NMK which is the state corporation that manages museums, sites and monuments requires Sh100 million to stabilise and fortify all the historical and cultural treasure in the coast adding that the sites from Lamu archipelago to Vanga in Kwale County were at risk of great destruction by the rising sea levels.

Jumba Ruins is a scenic Swahili settlement and the ruins are a fascinating place that continues to attract visitors, students and researchers with its centuries-old ruins of mosques, elaborate tombs and stone houses that have survived in recognizable condition.

Kiura said there are no written historical records of the ancient town but ceramic and archeological evidence show that it has been built in the fourteenth century but abandoned in the fifteenth century due to diseases and war.

The inhabitants of this abandoned 12-acre settlement were Muslims due to the presence of mosques, ancient tombs and Swahili houses and traded with people from the Arabian Peninsula.

Excavations works at the site were done in 1972 by James Karman while gazettement of the site as a national monument was done in 1954.