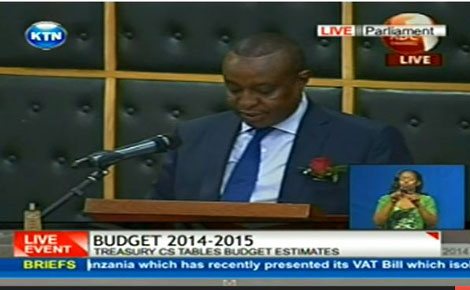 Nairobi, Kenya: Treasury has laid out an ambitious plan that could bring a turnaround in the country’s economy.

In the 2014/2015 budget speech, Cabinet Secretary Henry Rotich seemed focussed on addressing the country’s key perennial challenges: rising poverty and unemployment levels that now seem to get out of hand.

In a move aimed at boosting the business environment, Rotich allocated Sh116.7 billion to the ongoing and new roads which are to be constructed through annuity payment programme.

He further allocated Sh19.4 billion for the Standard Gauge Railway, Sh3.5 billion for the urban commuter rail system “to ensure completion of the line linking the Jomo Kenyatta International Airport to the Central Railway Station” and Sh43.6 billion to energy.

Court gives nod for ex-CS Rotich to be charged afresh

Analysts say the move to apportion Sh9.5 billion set aside for the on-going irrigation project countrywide and transformation of agriculture from subsistence to productive commercial farming would help in addressing the relatively high inequality levels in Kenya.

Leaders accuse Mwangi Kiunjuri, Charles Keter and Henry Rotich of alleged loss of over Kshs. 100B

By Moses Omusolo | 19 hours ago