Era of digital clutter threatens to drown us all

There are thousands of emails, videos, photos and documents hoarded in peoples’ electronic devices.

Some of them have never been opened, and many will never be.

This mountain of digital clutter keeps piling every day. Many companies, including Google, are creating more space for digital life—at a small cost—and the storage capacity of devices is increasing with every upgrade.

And so the mountain of thousands of emails, photos, documents and other digital belongings accumulated through work and personal lives piles on.

“We always imagine it might become useful someday,” says Alfred Ng’ang’a, a partner at Oxygene MCL, a marketing communications firm.

Worse still, the digital clutter is adding to physical clutter—read and unread books lying on shelves, cutlery, gifts and overflowing closets of clothes and shoes that have hardly ever been worn.

For emails, it starts with that welcome note—an email welcoming users to the world of email.

For photos, it is about that first snap—the curiosity to test the power of the front and rear cameras on your new phone.

Then the social media life sets in—Facebook, WhatsApp, Twitter and Instagram. And with every login requiring an email address or phone number, the user gets an email or text message for security reasons.

For the curious minds and those in careers such as communication, the digital clutter starts building at a faster pace.

It is a world of receiving, responding and sharing but hardly remembering to delete what is no longer wanted. 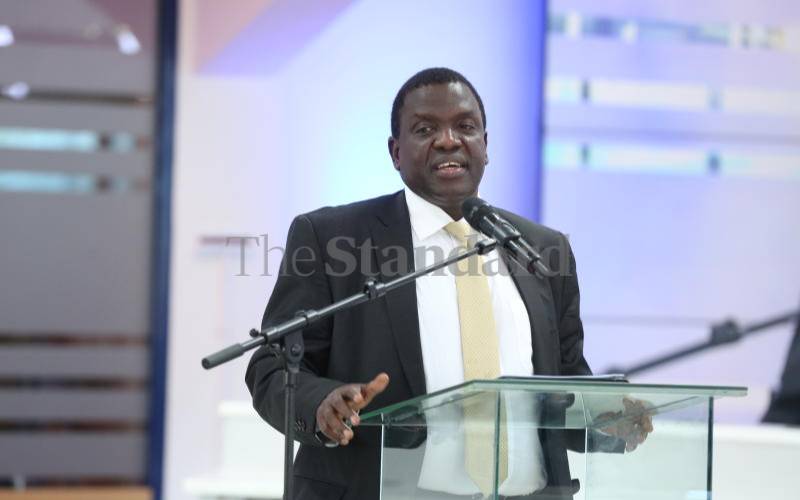 Jubilee Holdings Group Regional Chief Executive Julius Kipng’etich (pictured above)  says information overload is contributing to digital clutter. “We receive too much information from all directions because of convergence to mobile phone. The problem of storage was solved through the “cloud,” but the challenge is the time to access and digest this information,” says Mr Kipng’etich.

He sees a world where people and organisations running on artificial intelligence or robotics will emerge with the role of filtering information to rescue people from digital clutter.

“For me to go through each email and figure out what is for instance junk is not easy. I don’t have the time,” says Kipngetich.

Ng’ang’a, who also struggles with physical clutter such as clothes, says the discipline of categorising digital information into what is required and what isn’t is not easy.

“Data should ultimately have a sell-by date. We find ourselves with emails as old as three years. We intend to imagine that is our file. It is simply a bad habit of not decluttering,” said Ng’ang’a.

In the case of work-related digital clutter, people horde information for various reasons, including the thought that it could one day serve as evidence that something had been done or they gave instructions for a task to be accomplished.

For others like Hope Wambui, a social media manager and communications consultant, the fear of deleting information only to realise later that you need it motivates people to build digital clutter.

Ms Wambui recalls when she once deleted several folders from her desktop in the name of organising her digital life only to end up losing important information.

“I had spent three days editing a video clip only to realise it was gone. This has contributed to me building digital clutter,” she says.

With time, she explains, she develops a sentimental attachment to the emails she receives and the photos and videos she creates.

For her, they are one beautiful story that should be preserved just as the success cards from high school days that she has held onto for years. Whether digital or physical, it is her “beautiful mess.”

“I love my clutter. It is hard to delete things that I once designed or created. I would rather keep my clutter safe in folders since it is my beautiful mess,” says Wambui.

She has now developed the discipline of arranging her digital clutter into folders for ease of access and to avoid losing it.

But studies are now linking digital clutter to loss of time, slowed productivity, increased stress, and distraction from ones’ physical life.

This is in the form of time spent locating that email or choosing the best photo out of a huge digital album when you want to post on social media or the agony of trying to recall a forgotten password.

Unsubscribing from emails that no longer add value is something many people postpone. And so they keep being bombarded with unwanted emails and notifications each day.

Having too many digital files documenting almost every step of one’s life in photos, videos and texts, could pose cybersecurity problems; a data breach could publish one’s entire life.

Digital clutter also potentially presents a security risk to businesses, according to Kaspersky Lab, a multinational cybersecurity and anti-virus provider headquartered in Moscow.

“Whether it’s an organised hacker, a malicious insider or a disgruntled ex-employee, digital clutter becomes a problem when it compromises data security,” says the firm.

Kaspersky surveyed 7,000 employed adults from December 2018 to January 2019 across 14 countries, including the UK, USA, France, Germany, Italy, China and South Africa, who work in an office and use computers.

They were asked questions about their personal use of digital documents and how they organise their fridges back at home.

Oxygene’s Ng’ang’a identifies with this finding. He adds that human beings are wired to accumulate things and tie them to emotions.

“Even in my wardrobe, I have shirts I imagine one day I will wear, but that day never comes. Naturally, we are wired to acquire things. I even have cassette tapes for sentimental value,” he says.

More than a third (37 per cent) of respondents told Kaspersky they had accidentally found confidential information of their colleagues, such as salaries. A third claimed to have access to files from a previous workplace.

The majority (80 per cent) of respondents didn’t think it was their responsibility to ensure documents such as emails have appropriate access controls. Yet, 72 per cent stored documents at work that contain sensitive personal data.

Jubilee’s Kipng’etich says as a CEO handling multiple teams and information coming in from different areas of business, avoiding digital clutter is only “an attempt,” which could sometimes mean going to the office early and leaving late.

It is also geared towards creating more jobs while generating additional tax revenues for the Exchequer.