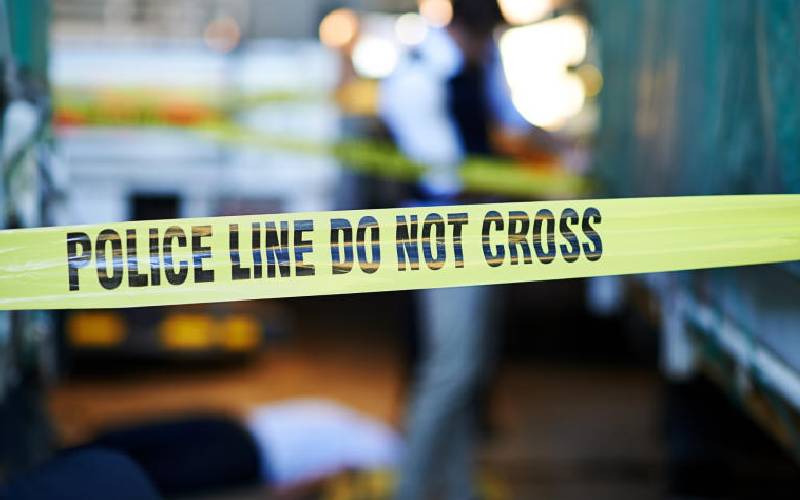 One of the solemn vows for newlyweds is to remain unshaken by the vicissitudes of time - to stick together through the good times and the bad times.

This rhapsodic incantation has spawned some of the most enduring love stories, including that of Bonnie and Clyde, an American couple notorious for their bank robberies during the Great Depression of the 1930s.

Similarly, some Kenyan men have pushed the limit of this sacred vow by inducting their wives into the treacherous world of illicit finances.

In some instances, there has been no coercion or indoctrination on the part of the husband. It has simply been a case of destiny bringing together two conspirators.

Or perhaps, there is a tiny spark of a juvenile trait in all of us that just needs a cool breeze of love to burst into a smouldering inferno of criminality.

Be that as it may, the result has been the ignominious sight of women being frog-matched to court as accomplices in cases where their husbands have been accused of embezzling public funds or engaging in illicit finances.

Rosaline Wanjira Abachi might not have had a clue of her husband Patrick Ochieno Abachi’s financial dealings, although she certainly enjoyed the fruits of his brow.

Unfortunately, some of the fruits turned out bitter for her when her husband started being dogged by sleuths for suspected embezzlement.

Between October 2003 and 2007 when Abachi worked at the Finance Ministry, investigations revealed that he was directly involved in authorising payments relating to what is commonly referred to as the Anglo Leasing security-type and related contracts.

The contracts comprised 18 deals entered into between the Kenyan government and various foreign companies, alleged to be fictitious, through which the government was to pay out billions of shillings.

These contracts were under investigation by the Assets Recovery Agency (ARA), which believes they were tainted with corruption as the accused could not explain the huge mismatch between his vast assets valued at Sh80.4 million and his gross salary of Sh53,900 by the time investigations against Abachi were started.

By then he had moved to the Agriculture Ministry where he was the chief accountant.

The investigators were, however, quick to say that they could not link his unexplained assets to the Anglo-Leasing scam.

These assets were acquired between 2002 and 2007 and included several residential premises some of which were registered in the names of his wife, brother and other close relatives.

Confronted by the investigators, Rosaline is reported to have contradicted her husband by saying that the assets registered in her name - a motor vehicle and a house - had been bought for by Abachi.

She had not contributed towards their purchase, and when pressed by the detective, she could not give a financial statement showing the transactions.

Mr Abachi is also reported to have had businesses which, ARA insisted, were cloak companies used to launder his ill-gotten wealth.

In one of them - Rick Seaside Villas - both Abachi and Rosaline were directors. The former had 900 shares, while the latter had had 100 shares.  But the bank account was in the name of Patrick Abachi.

The government authorities were adamant that those deposits were neither salaries nor emoluments.

A raid on his house in South C, Nairobi, also found Sh1.9 million in cash whose source, ARA says, Abachi could not explain.

The judge ordered the State to recover some of the properties. Abachi said he would appeal the ruling.

It is not clear if Rosaline was feigning ignorance or was part of the scheme.

In another case, ARA applied for the forfeiture of some assets, including properties and motor vehicles that Samuel Wachenje, a former finance director at the National Youth Service (NYS), is said to have bought using stolen money in the infamous NYS scandal.

Mr Wachenje, court proceedings shows, had impeccably covered his tracks in the Sh800 million scam. However, a soft spot for his wife Susan Mkiwa Mndanyi might have given him away.

He is reported to have received part of the Sh791.4 million that the key suspect Josephine Kabura fraudulently got from NYS.

According to ARA, on March 31, 2015, Kabura deposited Sh40 million to the account of one Sam Mwandime held at Family Bank, Kagwe branch.

As it turned out, Sam Mwandime was actually Mr Wachenje. Wachenje, the investigators said, is alleged to have used a forged national identification card to open the account.

Armed with this new identity, Wachenje then approached Tirus Kamau and his wife Esther Nthenya Nzioki seeking to purchase a house in Kasarani. This house, registered in Nthenya’s name, was valued at Sh21 million.

Then sale agreement in respect of the property, the detectives noted, was signed between Susan Mkiwa Mndanyi Wachenje on July 11, 2015.

Ms Mndanyi, as it turned out, was the wife of Wachenje, not Mwandime. And that is how she might have found herself on the wrong side of the law. Then there are couples whose gangster-like infamy, according to the State, would put them at par with Bonnie and Clyde if found guilty.

On February 21 last year, Justice Mumbi Ngugi ordered the State to seize properties belonging to one Joseph Wanjohi and his wife Jane Wambui after ARA alleged that they were bought with proceeds of crime.

The properties were registered in a company which the two jointly owned.

Wanjohi and his wife were also accused of trading in alcohol illegally, with the law enforcers finding alcoholic drinks valued at Sh7 million when they raided his houses in Muthaiga.

He is said to have deposited some of the money, close to Sh111 million, into bank accounts registered in his name. The rest were channelled to bank accounts belonging to his wife, Teresia Njeri Gitau.

Some of the cash would also be deposited into the account of Njetash Enterprises, a company owned by Njeri, whose sole purpose, the judge reckoned, was to launder stolen cash.

Legitimate income for Gitau, according to State calculation was Sh8,672,639 in the period of interest as part of wealth declaration, which he got from salary, rent, sale of motor vehicles dividends. But it was way below the Sh111 million he is said to have embezzled.

Mr Njogu denied having unexplained assets arising out of corruption, noting that he was a certified accountant whose record in various government offices had been unblemished.

When the Ethics and Anti-Corruption Commission detectives raided his home in Mururui Estate, they found Sh1.2 million in cash.

Gitau explained that Sh500,000 was a loan from a friend to pay builders; Sh715,000 was said to be part of a loan advanced to him and his wife by a long-time friend for purposes of boosting their rental business; while Sh24,940 was said to have been accumulated balances and fines from their welfare society.

According to the High Court Judge John Onyiego, Njogu could not explain the source of all the funds except the Sh24,940 from the welfare society. He ordered for the rest of the money to be recovered by the State.

Njeri described herself as a business lady operating a retail shop (stall) within Uhuru Market. Here, she said, she sells materials for making bags and clothes.

She recounted how sometime in 2000 she started rearing chicken, pigs and dairy cows. It was during this period that she registered a business under the name Njetash. But the business did not pick.

She said from her layers and broilers chicken, she started supplying eggs and chicken meat to various hotels and open markets in Wangige and Thika. Out of her sales, she could make Sh15,000 per day.

She claimed to have stopped farming sometime in 2009 when the family moved to Marurui estate, as neighbours complained of noise from the livestock and chicken. So she started a beauty shop along Thika Road.

In 2011, they decided to construct self-contained single rooms at Kasarani from which tenants started depositing rent straight to an account at Equity Bank in her name trading as Njetash Enterprises.

But ARA argued that Njetash Enterprises was incorporated solely for money laundering purposes.

For example, there is a time the Njogus are said to have borrowed Sh20 million from a longtime friend, a Mr Francis Mureithi, to buy a house in Kajiado. Six months later, Mureithi is said to have bought the house for Sh55 million.

“This explanation is rather ridiculous to any ordinary person. Although I am not a market expert and land valuer, it is unbelievable and the only logical conclusion is that the defendants were engaged in money laundering,” said Justice Onyiego.

In total, Njogu is said to have received Sh40 million in “friendly” cash loans without collateral nor evidence to prove the source of the money by the lenders.

Njeri also claimed to have borrowed Sh20 million from a friend, Ann Wathatu, for purposes of acquiring a house at Thome, off the Thika superhighway. However, Ms Wathatu in her affidavit did not talk about the loan she advanced to Teresia, noted the judge.

Tracy Musau, however, was able to prove that she was financially independent, escaping the wrath of the court after ordering the forfeiture of her husband’s revenues totalling Sh317,648,604.

Her husband, Jimmy Mutuku, was the former chief officer of finance at the Nairobi City County in 2015.

The State had accused Ms Musau of holding some properties in trust for her husband as she was depositing money in her account and using it to buy properties. Some of the properties were in her name, while others were in joint names.

However, the judge was satisfied with the explanation on the income from her businesses in interior design and a beauty parlour.

“She attached a bundle of receipts from ‘Tracey’s Interior Designs,’ which I have perused and it is evident that she used to make tidy sums from the business. It is, therefore, my considered view that the income from this business has been sufficiently explained,” said judge Hedwig Ong’udi in a July 2019 judgment.

Musau admitted having two properties in her name, B & M and one joint property with her husband, which was acquired in 2007.

A report by The Sentry, an investigative policy team, fingered Kenyan authorities for being among those that have done little to address the significant risk of money-laundering, especially in real estate.

The financial sector regulator wants banks to connect directly to this platform rather than going through a third party such as KCEB.

The Labour Court in Nairobi has ordered Absa to pay a former senior manager Naomi Connie Sh6.5 million for unfairly sacking her.