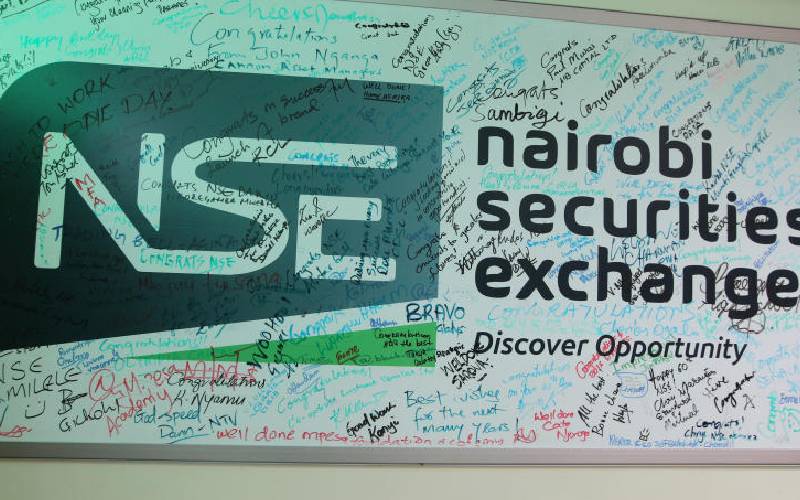 The trading of company shares in Kenya began in the 1920s and was based on a “gentleman’s agreement” with no physical trading floor.

It was not until 1954 that the Nairobi Stock Exchange (now Nairobi Securities Exchange) was formally registered.

During the brutal colonial era, Africans and Asians were largely locked out of the stock market and weren’t allowed to own more than a few shares.

Story behind the tusks of Mombasa

In two years, what was then known as the East African Trade Index had almost half of its market value wiped out.

This was between 1960 and 1962 during the Lancaster Constitutional talks that culminated in a framework to independence in 1963.

Globally, investors have always hated uncertainty and it was no different in Kenya.

Jittery investors were fleeing on the back of predictions that the economy would soon collapse.

However, the young vibrant Kenyans tasked with the formation of government-inspired confidence and after the Kenya African National Union (Kanu) took over the reins of power, market prices started rising.

The East African Standard (now The Standard) would describe the spectacular recovery of the stock market from the pre-independence slump as “one of the major phenomena of the young nation’s life in the past few years.”

The East African Standard further termed the steady rise of the market “a devastating reply to pessimists who a few years ago forecast that Kenyan commerce would collapse.”

Former President Mwai Kibaki, who was then Minister for Commerce and Industry, led a rallying call on Kenyans, especially the emerging middle class to invest in the bourse.

Even as the newspaper buttressed the need for more locals to buy shares, it noted that the Kenyan middle class had more pressing priorities such as owning homes.

“Only comparatively few Kenyans, even now, are in a position to become investors. Many of the growing middle class have more urgent priorities such as building their own houses,” reported the newspaper on August 21, 1967.

Curiously, the upcoming middle class thought that the idea of buying shares was “capitalism” and should be avoided at all costs.

“But the idea that buying shares is ‘capitalism’ and therefore to be shunned should not deter those who are able to invest,” wrote The East African Standard.

“The more Africans are able to do so, the more the country will benefit not only from the increased volume of money for development of business (and therefore the provision of more jobs) but because this is the way to full local control of Kenya’s commerce and industry and an end to complaints of foreign domination.”

In the 1970s, the rallying call still continued. By this time, Asians dominated the Nairobi Stock Exchange as the largest number of investors followed by Europeans, while Africans trailed far behind. Just like now, banks and insurance companies also invested heavily in the bourse. The membership of the exchange was restricted with only six partners handling it.

In the early 1990s, the liberalisation of Kenya’s financial sector was also an interesting and confusing moment.

It would quickly pick up momentum than the regulators had expected.

“When the Central Bank of Kenya (CBK) threw the door open. It may not have understood all the dynamics involved,” remarked Kitili Mbathi, a senior manager with Citibank in 1995 during a panel organised by the Institute of Economic Affairs.

Mr Mbathi cited the foreign exchange regime as the worst affected, with CBK content to allow the shilling to appreciate against major currencies but unsure about what action to take and panicked every time it weakened.

“As soon as we see a weakening of the shilling, we see a political constituency coming in,” he said.

A former CBK official identified as Mr B Mumelo would admit that the financial sector had been caught napping by the reforms in the sector.

There was no well-trained manpower to meet the demands of the liberalised markets.

“Some of the domestic banks are yet to train a proper foreign exchange dealer,” he said.

John Ngumi, now the Industrial and Commercial Development Corporation (ICDC) Chairman and a key market player in those days as an investment banker, while agreeing that the liberalisation was a breath of fresh air to a suffocated market, he also noted that the financial sector was unprepared to the deregulation.

“In some areas (of financial liberalisation), we’ve gone too far too fast,” said Ngumi, who was then a partner at Loita Asset Management.

The liberalisation meant that the Kenyan financial markets were free of all controls, with market forces set to determine interest rates and the exchange rates levels.

Players would, however, note how the Kenyan financial markets were ridden with imperfections.

Ngumi noted how it was still hostile to new financial markets.

“My attempts to introduce new financial products in the market have been met by a wall of conservatism in both official and private circles,” he said.

Regulators have continued to blame each other over the doomed Sh2 billion Imperial Bank bond even as investors’ six-year wait for answers continues.

Liquidator is optimistic about the firm’s lease, saying they were able to stop illegal businesses, including the sale of the company’s properties.