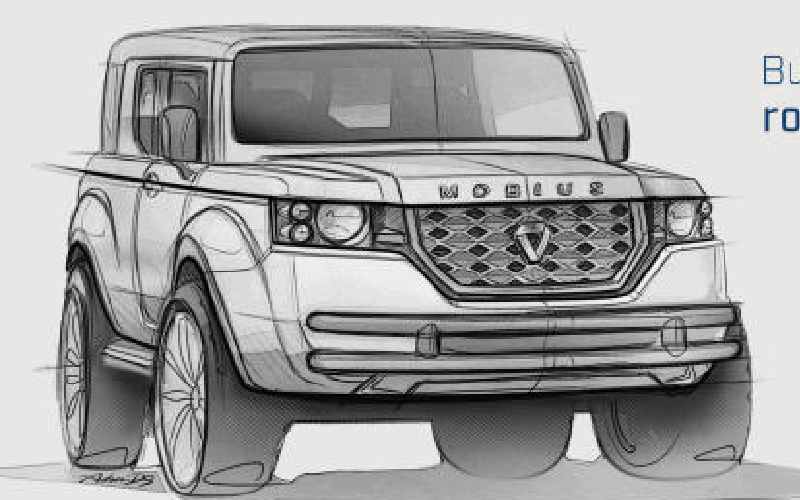 The elusive wait for a Kenyan manufactured car seems to be over. Or is it?

Some 30 years ago, such heady ambitions resulted in the smoke and mirrors project that was the Nyayo Pioneer.

It was as a result of four years of labour following the late President Daniel arap Moi’s challenge to the University of Nairobi in 1986 to produce a car “however ugly or slow it may be”.

However, one of the prototypes did not even move past the 400-metre mark.

Fast forward to 2011, and Joel Jackson, a British national, waltzes into the country promising a vehicle “designed for Africa and built in Africa”.

And behold, the Mobius was born - a box-like machine with hints of the iconic American Jeep in its frame and derived from an old forgotten era of car making as the design does not accommodate any electronics.

It is touted to have the “durability required to handle rural roads and sold at the price of a used sedan”.

Forget the raging motoring critics for a while or even nationalistic pride inspired by the local manufacturing bit.

“We want to start selling at a competitive price and achieving the cost of production that enables us to achieve a profit,” Guibert told Financial Standard in an interview.

“At the beginning, of course, we won’t generate a lot of profit, but we want to be sustainable to be able to turn a profit,” he added.

Sustainability means being able to pay salaries, rent, overheads, among other costs.

“We plan to break even in less than two years. We are currently using funds that were raised in the last three years to develop the car and invest in the factory,” said Guibert.

The biggest challenge, he said, is to find a way to achieve profitability with the car’s current selling price, which they hope to keep at below Sh2 million.

The new generation of the Mobius goes for Sh1.5 million, but the firm wants to bring it lower for mass production and profit-making. The first one sold for about Sh1 million, with Guibert saying its resale value was also “decent.”

Guibert, a Frenchman, said they’ve received about 500 pre-orders, and once production starts, they plan to sell 2,000 units per year, with the factory having a 5,000 annual production capacity.

“We plan to launch our car in the third quarter of the year. But we won’t if the quality and robustness is not there,” he said.

They are mostly funded by foreign investors, although Guibert said there are also a few local ones.

Guibert joined the adventure about a year and a half ago after being tapped by founder Jackson to reinforce the carmaker in terms of skills, riding on the Frenchman’s decades of experience with top automobile manufacturers, including Peugeot, Citroen, Jaguar and Land Rover UK.

Jackson expressed shock during a visit to Kenya that the local automotive market was made up of 90 per cent imported second-hand cars.

These cars are over seven years old with high mileage of up to 100,000km and without a warrant. They also sell at relatively high prices.

“They were also not really adapted to the African conditions. Here people also make a mixed-use of their car for personal and professional use,” said Guibert. High import duties put new units out of the reach of many Kenyans.

“To turn that around, we have to produce that car locally to avoid paying those duties and also involve a high local content as well,” he said.

“So in the last 10 years, the auto design has evolved into an all-terrain car adapted to local customer needs, is affordable and competitive against the imported used cars.”

This is amid government plans to phase out the importation of second-hand vehicles by 2026 in a radical shift meant to spur the growth of the local car assembly industry.

It is part of a raft of measures to streamline the motor assembly sector contained in the National Automotive Policy drafted by the Industrialisation ministry.

Government data notes that second-hand car models make up more than 85 per cent of the imported Fully Built Units (FBUs) in Kenya, with the bulk coming from Japan.

During the opening of the Mobius plant, Trade Cabinet Secretary Betty Maina revealed that Sh600 million has been set aside to purchase locally assembled or manufactured vehicles as part of the government’s Covid-19 economic stimulus plan.

Guibert said Mobius has a mission to society to help develop the Kenyan car industry. The commissioning of the plant, he said, was an opportunity to invite the government to offer support to the auto industry.

“It was an opportunity for us to start discussing with the government on how they can help us further. What we are doing is totally uncommon in addition to what exists because the government is already doing a lot for the car industry,” he said.

Mobius Motors has 55 employees and hopes to scale up the number in the longer-term to between 200 and 300 people as mass production starts.

It bills itself as a local manufacturing company and only recruits expatriates when there’s a need to transfer skills.

So far, the company has designed two models. Guibert described the second generation as a “very simple design devoid of too many electronics or technology that drive prices up.”

He described it as a robust car, with the core structural element of Mobius II being a steel space-frame mounted onto a longitudinal ladder chassis.

He compared the car’s electronics set-up to that of the iconic Peugeot 504 of 1968-1983. This is minus the infotainment tablet which, however, is not connected to the vehicle’s wiring but to a driver’s phone to enable GPS use.

“Because it’s a simple design, features are very basic … if it fails, it’s very easy to repair… you can probably repair it on your own, so it’s a car you can service very easily anywhere cheaply.”

The Mobius II also has no central lock; the windows are manual with a very simple wire harness.

Guibert said the chassis and body are fully manufactured locally.

“This is the difference with the others… they import and assemble all the parts with a very low local content,” he said.

Guibert said from the first model launched five years ago, 50 cars were built but production was halted as it was proof of concept.

“The objective was to really put a car on the road and to see what we are able to do and from this car decided to improve.”

The new car now has a new 1.8-litre engine, an upgrade on the previous 1.6 litres one. The engine is from China’s giant automaker Wulin Motors.

“It’s a very robust engine for commercial vehicles but the base design is a Toyota, and since we started the test and already driven the car over 40,000km, we haven’t gotten any concerns,” he said.

He explained it was a long process to develop a car up to approval by the Kenya Bureau of Standards, adding for the last one and a half years they have been doing a design validation plan, which is a phase of series of tests to the vehicle before rolling out production.

“Our technical team is driving our cars in multiple conditions. Last December we sent a car to India for crash tests,” said Guibert.

Exports to non-traditional markets such as Cote d’Ivoire and Australia helped grow export volumes, shielding country from the ill effects of Covid-19

By Kevine Omollo | 5 days ago