Locked out of their forests, Kenya's Sengwer people fight back 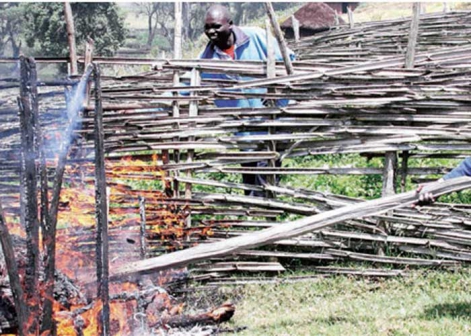 Edwin Kipkotich Kiprono was asleep in the forest beside his brothers and the family's 10 cows, when he was woken by the sound of 40 guards running towards them.

The 21-year-old is a member of the Sengwer community, traditional hunter gatherers who have been playing cat-and-mouse games with Kenya's authorities since British colonists evicted them from their land in the late 19th century.

"I woke my brothers and we ran," he told the Thomson Reuters Foundation. "If they caught us, they'd arrest us."

In the darkness, he heard about 10 other families fleeing Kenya Forest Service (KFS) guards in the Cherangani Hills, some 400 kilometres (249 miles) north-west of the capital Nairobi.

The Sengwer say they have been evicted from their ancestral land more than 20 times since it was gazetted as a forest reserve in 1964.

The United Nations and the World Bank criticised the KFS in 2014 for forcibly evicting thousands of Sengwer from the forest by burning their homes, leaving many camped out by the roadside.

"We need to protect the forests," said KFS commandant Alex Lemarkoko, justifying ongoing evictions. "They are not supposed to be in the forest. It is against the law.

"We want to integrate them into other communities and support them to engage in development," he added.

Across Africa, up to 14 million people have been expelled from their land to create protected areas like national parks, according to Charles Geisler, a sociologist at Cornell University, who dubs them "conservation refugees".

"These evictions, it's actually pushing the Sengwer community to extinction," said David Yator Kiptum, a community spokesman. "We are calling on Kenya Forest Service to stop this continued harassment, evictions and arrests."

About 5,000 families are living in misery and poverty in the forest, Yator said, often sleeping on skins under trees.

"When it rains, we really feel for the children," said Jenniffer Kiptoo, 45, who said her family of 10 sleep under a makeshift shelter of wooden poles and a tarpaulin every night.

The Sengwer are one of five communities who have been living in Kenya's forests since time immemorial, eating meat and drinking milk from their livestock and collecting wild plants like stinging nettles and honey from beehives.

They have asked the National Land Commission (NLC), an independent government body set up in 2012 to manage public land and investigate historical injustices, to examine their case.

"We really need to protect the interests of these people," said NLC chairman Muhammed Swazuri. "But you know a forest reserve is a national treasure... It's really a balancing act."

Kenya has been hard hit by illegal settlement, logging and charcoal production in its indigenous forests, reducing forest cover to seven per cent of land mass, KFS data shows.

"It's a multimillion dollar industry."

Squatters have also moved in to the forests because of poverty, population growth, political violence and natural disasters, threatening national water and energy supplies, agriculture and endangered species.

Campaigners argue that the best way for Kenya to protect its forests is to give indigenous communities like the Sengwer ownership of the land on the condition that they conserve it.

"Science demonstrably shows that ancestral forest communities are the best people to protect their lands," said Justin Kenrick, Africa coordinator for the Forest Peoples Programme, an international charity, pointing to Brazil where millions of hectares are managed successfully by indigenous communities.

"If you own that forest, if it's yours for the long term, you take care of it," he added.

Although their ancestral land was gazetted as a game reserve in 2000, another forest community, the Ogiek, live peacefully on the mist-swathed slopes of Mount Elgon, Kenya's second highest peak, bordering Uganda.

This is the result of a "gentleman's agreement" that the community negotiated with the government in 2011, allowing them to stay on the land, said Peter Kitelo, a community activist.

At checkpoints, he exchanged greetings with their khaki-clad officers, who asked him to bring them milk and honey.

Kimei has been patrolling the forest since he was 15, having been taught about conservation by village elders through traditional stories, songs and proverbs.

"It's a taboo when you fell a live tree," he said. "There is a ritual that is done by the elders before you cut."

Similarly, the Ogiek rarely kill animals because each of the 32 clans has a different animal totem, which must be respected.

The dirt road into the forest was strewn with elephant dung and branches, remnants of their breakfast a few hours earlier.

"There was a lot of poaching when we were evicted," said Cosmas Chemwotei Murunga, 68, who has been forcibly removed four times. "Now, that we are back, they (elephants) have increased."

Elephants are sacred to the Ogiek because their behaviour, such as finding food for their young and suckling them, mirrors that of humans, Murunga said.

But there is little appetite for a wider adoption of this new approach in Kenya, say activists, because land is such an explosive political issue and powerful forces are lined up against the marginalised forest communities.

"It becomes a David and Goliath sort of duel," said Samwel Mohochi, executive director of the International Commission of Jurists rights group.

Numerous government inquiries have called for the revocation of titles illegally granting vast tracts of protected forests to allies of President Daniel arap Moi in the 1980s and 1990s.

But action has not been taken.

"As long as you have institutions that perpetuate impunity, institutions that are more about rent seeking than doing what is right, then you can forget it," said Odenda Lumumba, national coordinator of the Kenya Land Alliance advocacy network.

The Ogiek say KFS colludes with loggers in deforestation, pointing to the charred tree stumps on the denuded lower slopes of Mount Elgon.

KFS's Lemarkoko said he was not aware of any officers engaging in illegal logging but any found doing so would be disciplined.

"Doing this half-heartedly would be like giving someone the right to drive, but then not giving them the steering wheel of the car," he said.

"It might end in a crash... If there's weak governance and corruption, then it will not work."

'Now or never' to save Barrier Reef: scientists