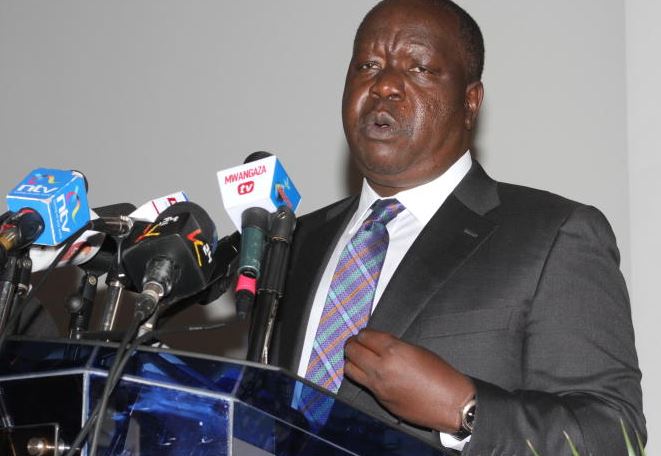 The Interior Ministry has 14 days to reply to a petition seeking the revocation of a sub-county in Mandera. Garissa High Court Judge Justice Charles Kariuki ordered CS Fred Matiang’í (pictured) to file the response and have the matter mentioned in court for directions on September 17, 2020.

Yussuf Suraw and 401 others claimed in the petition that the process leading to the formation of the sub-county violated the rule of law. A special gazette Notice No 10581, of December 2016 created Kutulo sub-county together with its divisions. The sub-county was initially part of Mandera central sub-county. “The creation of these administrative unit as delivery coordination unit was done in violation of the law and without public participation,” argued the petitioners.

In creating Kutulo, they said, the government did not consider the population of the sub-county, the size of the area and the community interest. According to them, the population of Kutulo is sparse and some units that were created were not occupied and that its administrators were in charge of un-occupied locations and sub-locations. They named eight administrative units including, Elkuro and Sukela Dima locations and Garbiti, Kuro, Guchi, Kutulo East, Duse and Sukela Dima sub-location.

The petitioners also want the court to declare the appointment of Mandera Deputy County Commissioner illegal, null and void.

Premium
Inside the Equity-KCB supremacy war
Financial Standard
By Dominic Omondi
1 hour ago
Premium The bitter war to recover Sh594m investment in deal gone sour
Business
By Patrick Alushula
3 hours ago
Three months later, Nzoia Sugar roars back to life after repairs
Business
By Juliet Omelo
7 hours ago
How fintech tools can help cushion Kenyans during inflation
Opinion
By Munyi Nthigah
9 hours ago
Mombasa port operations will not be interrupted during polls
Business
By Philip Mwakio
9 hours ago
.