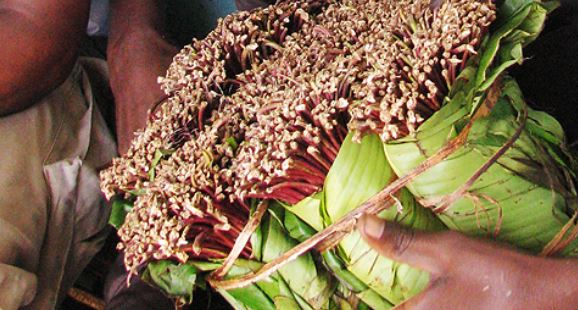 Minority Leader Ayub Bundi presented the first motion which urged the executive to waive all the levies paid by farmers and traders, for a period of six months, up to March 2021.

Bundi said small-scale miraa traders needed relief from license fees, daily market charges, and cess charges.
The second motion urging the County Executive to facilitate the formation of a cooperative society for miraa farmers and set aside a kitty to support farming and sale of miraa was sponsored by Adamson Muriki, the Athiru-Gaiti ward rep.

Bundi argued that the closure of the Somalia market, where most of miraa is exported, and the coronavirus, had hit families in the Nyambene miraa zones hard.

Bundi said the transportation and consumption of miraa had significantly reduced, putting the economic status of farmers in peril.

“The economic status of these people is terrible. This population is terrible, in an area where 80 percent of the land is covered with miraa. It is important for the county government to create a waiver,” said Bundi (Abothuguchi Central).
The rep said as it stands, families that traditionally depended on miraa for sustenance had their purchasing power compromised, owing to the loss of the Somali market and Covid-19 effects.

A section of the MCAs from the 25 miraa growing wards supported the motion, with Jediel Mauta and Adamson Muriki telling their colleagues that households had been in economic turbulence for months.

“The effects of the closure of traditional markets for miraa and coronavirus have hit hard. But we have also lost local markets. The county government should mitigate the problem,” Mauta said.

Muriki said: “Transportation of miraa to Mandera and other (north-eastern) parts has greatly reduced, and prices drastically fell, too. Normally we irrigate farms in order to harvest regularly, but farmers do not have money for inputs.”