Road to nowhere? Why it's a sore ride for Uber drivers

One late Tuesday evening, Francis Ikava was reclining in his car seat, slowly being lulled to sleep by the rain, when he received a notification on his phone.

It was a ride request. The client wanted to be picked up from Dunga Road in Nairobi’s Industrial Area and taken to Ngara.

Ikava made his way to his client and his surprise, there were now two of them and they happened to be prominent legislators.

The one who had hailed the cab said he had left his Toyota Landcruiser at a garage in Ngara and he needed to get there immediately.

Ikava explained that due to the rainy weather, there would be a price surge.

The other passenger alighted at Parliament buildings and at the end of the trip, the final amount totaled Sh4,190.

The client declined to pay, arguing that the amount was too much. He then alighted, leaving Ikava penniless and stranded as he drove off in his machine.

His passengers might have thought he had overcharged them for the journey from Industrial Area to Parliament and subsequently, Ngara.

However, they did not factor in the cost charged by Uber per kilometre, the charges per minute and the time they had booked the taxi.

When the cost of the trip goes high, Ikava says, the driver gets the wrath of a disgruntled passenger.

The drivers are often accused of manipulating the app, but the problem is not of their own making.

Following Uber’s protocol, Ikava reported the case and was met with an unexpected response.

Uber claimed that the app had been corrupted at the time of the incident and advised him to let the issue go.

Ikava’s experience is not an isolated incident. Alice Kajuju once found herself in a fierce relationship wrangle after she drove home an intoxicated woman whose husband suspected her of infidelity.

Kajuju was almost attacked by the infuriated man but a neighbour intervened. Ikava and Kajuju’s experiences read like something out of a fictional book but the truth is that they are real and represent the lives of many cab operators under Uber Kenya.

Besides dealing with rogue clients, Uber’s punitive working conditions, supposedly shifty lobbyists and a government that seems incapable of helping are among the issues that have many drivers stuck in reverse.

When Uber first burst into the Kenyan market seven years ago, it caused waves in the taxi industry.

An app that enabled people to hail cabs from wherever they were to the destination of their choice was the first of its kind and indeed a game-changer.

Like many drivers at the time, Ikava jumped at the opportunity to work for the taxi-hailing company, which showed great promise. His early days at Uber were a smooth ride.

At the time, being a cab driver was a side hustle since he was employed as a logistics coordinator at Agri-Wallet, a mobile financing tool for agribusiness.

He would operate the taxi before and after work. He had even rented out his spare car to someone else for Uber services.

Back then, the working rates were favourable as customers were charged Sh60 per kilometre with a minimum fare set at Sh300.

“Before, you didn’t even need to work the entire day because you would earn enough money within three hours and pay off all your expenses,” Ikava tells Weekend in Business.

However, the reality now for many Uber drivers is grim.

The company makes 25 per cent as commission from every ride, the highest of all taxi apps, with the rates lowered to Sh25 per kilometre.

On June 15, 2022, Uber Kenya announced that it was working on a price review to compensate drivers following the fuel price hike by Sh9 per litre.

For now, the move is a temporary relief to cab operators but the multinational has not indicated any plans to reduce the commission rate.

Further, there is no guarantee that the review will enable drivers to make extra earnings and recover from the losses incurred since the introduction of the commission and price cuts.

According to Ikava, the cracks started forming when other e-cab services Taxify (now Bolt) and Little Cab emerged, prompting Uber to slash its fares and introduce new services.

“Previously Uber only had two categories, Uber X and Uber Select. When competition arrived, it introduced a lower-priced service Chap Chap,” he says. “It also introduced new categories of cars, allowing smaller cars. More people started to use the smaller cars because they were cheaper and more fuel-efficient.”

The company increased the number of cars and drivers on the platform, further causing the drivers’ wages to plummet.

Thus, in August 2016, drivers took to the streets to demand better terms from the ride-hailing service - and it has been an uphill battle ever since.

Besides the rates, Uber places strict conditions on the kind of vehicles the drivers should use. For starters, only four-door vehicle models from the year 2012 or newer are allowed.

According to the company’s website, only spacious sedans and station wagons with an engine capacity of at least 1300cc to 1800cc are eligible for the Uber X category.

For Uber Chap Chap, only small hatchbacks with an engine capacity of 1300cc or less are required. “You have to go for the car with less consumption and one that will enable you to make more profit according to their conditions. Using bigger cars puts you at a loss,” Ikava says.

In an attempt to keep up with Uber’s vehicle standards, Ikava has found himself changing cars six times.

Kajuju worked in customer service at a Kemri-affiliated organisation until her contract expired in early 2018.

To make ends meet, she started working with Uber at the end of that year, using a leased car, until 2020. When she was starting out, things were better.

At the onset, she could afford to rent a car at Sh3,000, but the charge has since been reduced to Sh1,000. Kajuju had it all figured out. She was going to start as a cab driver, thereafter venture into owning her own fleet and employ other drivers.

However, her dreams are hanging in the balance as she is now forced to work 15 hours a day starting from 4.30am and ending as late as 10pm.

“We are living from hand to mouth. Savings are now a privilege as the aim is to get money for that day. I went from earning up to Sh12,000 a day to now getting a third of that.” “Sometimes, you try to give yourself some time off then you remember that basic things are lacking at home. So you just decide to take a few trips to earn some money to buy what’s needed.”

Since Uber only provides the app, the driver has to account for the rest of the expenses including fuel, car maintenance, paying off the car lease or loan, and mobile data and airtime to use the app.

The drivers’ low earnings are not only hurting their livelihood.

For Sophie Gedo, the long working hours have put her health in jeopardy.

Spending long hours on the road has resulted in her having to deal with painfully swollen legs at the end of the day.

Gedo says her case is mild compared to other drivers who have suffered worse fates with some succumbing to fatigue and stress-related deaths.

Just like most occupations, digital taxi operators have community organisations to represent their issues in the industry.

The most prominent ones are Digital Transport Forum (DTF) and Digital Partners Society (DPS). However, one driver, who wished to remain anonymous, claims that the lobbies are influenced, especially when drivers hold protests.

He claims that before, the union leaders would be complacent in advocating for the drivers because they were being influenced to be silent. However, when the pay was reduced, they became more active in pursuit of reforms and regulations in the sector.

He says the progress made through lobbying for the gazettement of the Digital Hailing Service Regulations (TNC Rules 2022) is something that the drivers ought to be grateful for.

“It’s impossible for a company of Uber’s calibre to bribe us since they have the best lawyers to represent them if anything arises.”

Weekend in Business contacted Uber on the drivers’ grievances but is yet to get a response.

In April 2022, Uber suspended its operations in Tanzania citing a tough regulatory environment that made business impossible.

In Kenya, though, the international ride-hailing firm is thriving in a sector that remains largely unregulated.

This nonchalance is what prompted digital taxi drivers to threaten to switch off their taxi apps in February this year.

The drivers wanted the government to gazette the regulations (TNC Rules 2022), which had been passed by the Senate’s labour committee chaired by Nairobi Senator Johnson Sakaja.

The regulations, which were proposed by the National Transport and Safety Authority (NTSA), would prohibit digital taxi firms from charging a commission of more than 15 per cent of the fare.

If passed, the law would also require the firms to set up a subsidiary in Kenya, and pay an application fee of Sh500,000 and an annual renewal fee of Sh300,000.

To date, nothing has been done.

The relationship between Uber and its drivers remains blurry.

While drivers are drowning in debt and fatigue, the company fails to recognise them as employees and prioritises clients over them.

“Uber expects us to give a world-class service yet they aren’t treating us with the same expectation of commitment,” says Kajuju.

Her fellow driver Gedo says the lack of binding contracts makes it easier for the company to exploit them as they are treated as independent contractors instead of employees with benefits.

Uber recently celebrated the milestone of facilitating a billion trips on the African continent.

Meanwhile, its drivers continue to be trapped in a vicious cycle of debt and low earnings as they wait for the road to clear.

The Standard contacted Uber on the drivers’ grievances but is yet to get a response.

Previous article
Premium
Working late nights? It could be detrimental to your health

Next article
Potato farmers to get quality seeds, increase profits 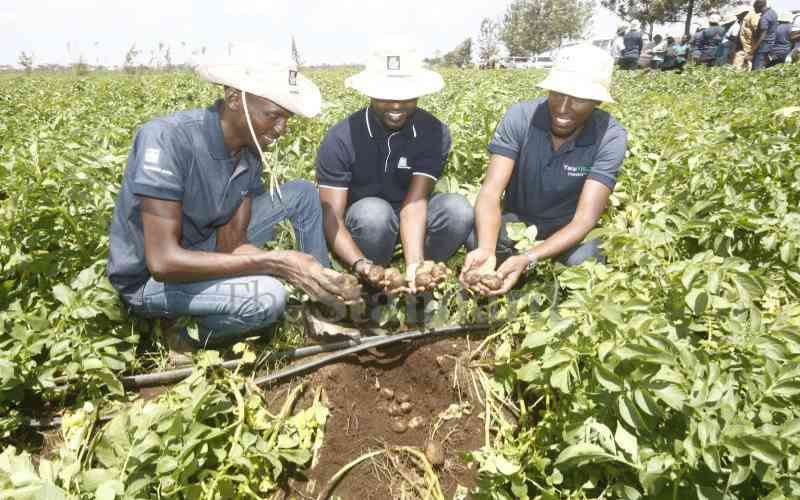 By Philip Mwakio and Patrick Beja 18 hours ago
Business
William Ruto's order on port takes effect, impact not yet felt