Tuskys employees’ strike enters its second day as they demand pending dues, two months’ salary and what they term as “arbitrary termination of their contract”.

The workers who assembled outside Tuskys Daima, shouted and raised banners- a last resort in claiming what is rightfully theirs. The crowd made of laid-off workers and those in the Union have promised to move to every store in the city as their colleagues do the same in different parts of the country.

“One of the major concern we are agitating for is three months’ salary from July August and September,” said Olenabor Wycliff, a general worker at Tuskys.

On 28 April this year, Tuskys deducted its employees’ salaries in the wake of Covid-19 by 20-30 per cent depending on the amount being earned.

The dispute was reported by the Kenya Union of Commercial Food and Allied Worker (KUCFAW) on May 11, 2020 to the Ministry of Labour, a mediator appointed and a resolution meeting convened.

However, the meeting bore no fruits as the two parties never agreed hence forcing the matter to go back to court.
According to the law, an employer shall pay the entire amount of the wages earned or payable to an employee in respect of work done and that any deduction to be made can be effected after the employer consults the employee.

In a ruling made before Hon. Justice Byram Ongaya in July 2020, the Employment and Labour Relations Court ordered that the employer stop any intended pay cuts and refund the employees any prior deductions.

“The Court has considered the prayer for a mandatory injunction that the amount already withheld by reason of salary cut or reduction be released,” read the ruling.

“The amount deducted from salaries was to be refunded. The employers till today have not honoured the court order and have not refunded the money,” said Mr Olenabor.

In a termination letter from Tuskys to its employees on 21 September, the giant retail chain store conveyed the shocking news to its staff one day before it was to be effected.

“The workers who were affected were substantive employees and those who are working are outsourced. We need the rule of law and the orders that were given to be followed,” said Mr Olenabor.

“A few days ago, we were called at night to pick our termination letters the following day. They used Covid-19 pandemic as an excuse for paying our salaries and other dues,” said Edward Ongati. 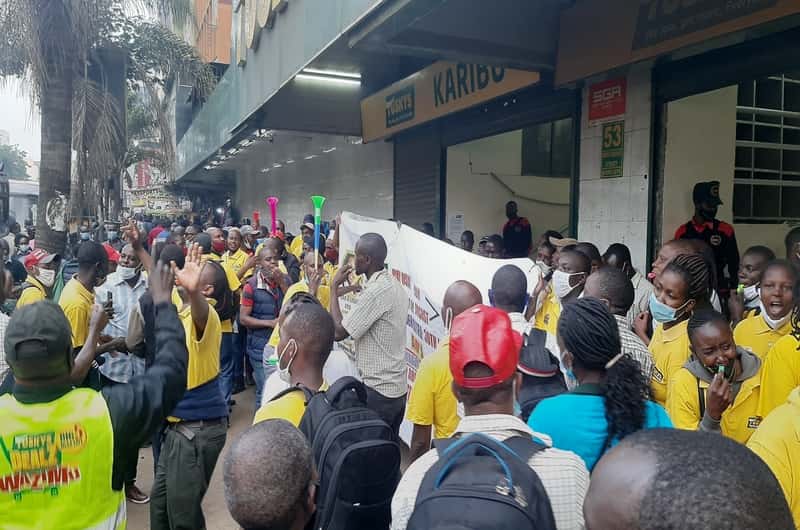 Joseph Mulwa was working for Tusky’s in Kisumu and since he lost his job he has been surviving on his savings and says making due during these tough times “has been a miracle by the way.”

Mulwa has also called out his former employer saying that those who joined the union have been victimized through contract termination.

According to the unionist, the troubled retailer had promised to clear all pending dues by yesterday but with no action being taken, the workers have promised to be on the streets even tomorrow.

With a bleak shadow casting over the once-promising  colossal retail chain, a ray of hope is on the horizon after the High Court stopped its liquidation process to allow the retailer to actualize its Sh 2 billion capital injection with an anonymous Mauritius based fund.

The Conversation 11 hours ago