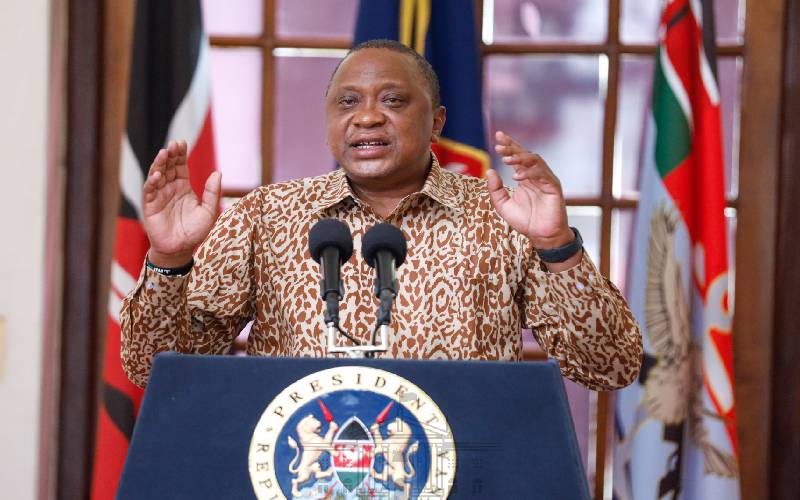 President Uhuru Kenyatta (pictured) has unveiled a Sh53.7 billion eight-point economic stimulus package to alleviate the effects of coronavirus pandemic on the economy.

Addressing the nation from State House Nairobi, Uhuru said the funds would to infrastructure, education, SMEs, health, agriculture, tourism, environment and manufacturing to cushion the economy against coronavirus.

The stimulus package is in addition to the Sh10 billion set aside to deal with the coronavirus pandemic and Sh30 billion in the budget for the aid of vulnerable communities.

Below,  the program at a glance

Uhuru also urged Kenyans to comply with measures put in place by the Ministry of Health to flatten the curve of infections.

“It is true that the rate of infections may indeed surge upwards if we fail to comply with the protocols issued by the ministry of health," he said.

He said the government had been disbursing Sh250 million weekly to help vulnerable families that have been affected by the virus and flooding in various parts of the country.

"The pandemic has had a negative impact on Kenya's economy with many people stripped of their dignity and thrown into financial ruin, unable to feed their families or afford rent."

President Uhuru said the government opted to send the money directly to the vulnerable families due to loss of more than half of relief resources sent to families affected by calamities, in the past, to brokers and logisticians.

"Through this process, we have managed to bypass brokers and cartels that used to dominate the sector," said President Uhuru.

Secondly, the government has been able to catalyse local economies through the money sent to the families by injecting Sh250 million weekly into the local economy.

"Money in the hands of a family restores dignity for it give people power to make economic choices in their local spaces and not depend on lining up, waiting for food relief - This helps us build the economy from the bottom up," said President Uhuru.

Uhuru said the Government will engage the youth in the Sh10 billion national hygiene programme.

The programme will see most jobless youth engaged in restoring public hygiene standards.

"So far, 26,000 young people have been involved in the programme. Following approval of the budget, that number is expected to rise to 200,000," said President Uhuru.

By Moses Omusolo 1 day ago
Business
Kippra: Work scarce for people with disabilities