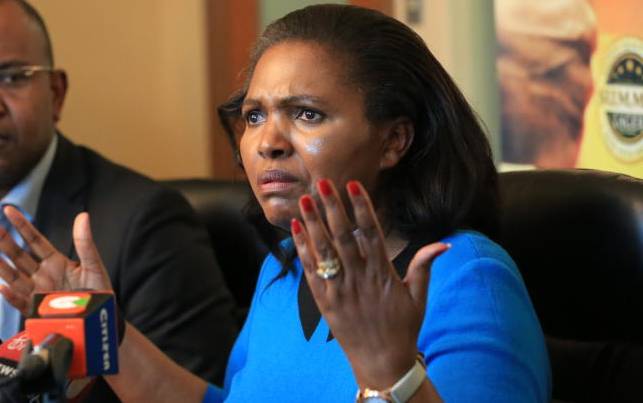 iron lady who took on East Africa’s largest and oldest brewer is on the verge of the closing shop over a Sh9.1 billion tax bill.

Unless an appeal saves her, Tabitha Karanja (pictured) is staring at financial ruin, bringing to a close a business she has painstakingly built over the last two decades.

The KRA is set to collect Sh9.1 billion in taxes from Keroche Breweries Limited with regard to products manufactured and marketed by the company. This follows a win by the Kenya Revenue Authority in six appeals filed by Keroche before the Tax Appeals Tribunal in 2015 and 2017, respectively.

But in a swift rejoinder, Ms Karanja said she would be moving to the High Court to appeal the tribunal’s decision in what is likely to prolong the battle with the taxman.

She accused KRA of jumping the gun to declare victory when the arbitration that could end the stalemate is not yet complete.

“Keroche Breweries will challenge both decisions at the High Court and if need be in the Court of Appeal,” said Karanja, the CEO of Keroche.

“However, it is important for both the media and the public to note that both KRA and Keroche Breweries were asked to first resolve the matter using the tribunal and only go to court if this failed.”

She took issue with KRA’s framing of its public announcement that stated, “KRA wins case to collect over Sh9 billion from Keroche Breweries.”

In three of the appeals, the contention was the manufacturing process of Vienna Ice  Vodka. Keroche has insisted that one of its alcoholic drinks had been diluted with water and as such not all the content should attract taxes.

“The decision to tax the water added to our vodka at the above rate makes this the most expensive water in the world.”

However, the taxman cites provision of Excise Duty Act, 2015 which says that compounding of spirit amounts to manufacturing. Excise duty, also known as sin tax, is normally levied on goods traditionally deemed as non-essential. However, the tax has been expanded to include goods that are not necessarily luxury alcoholic drinks, bottled water, cigarettes, chocolate and soft drinks. Other excisable goods are petroleum products, sugar, and airtime.

The brewer argued that Vienna Ice Vodka was not a distinct product from Crescent Vodka since Vienna Vodka was produced by diluting Crescent Vodka, which process did not amount to manufacture.

If forced to pay in one swoop, Keroche will certainly close shop, according to observers.

In 2015, Keroche Breweries was almost being closed over what KRA said was the brewer’s failure to comply with tax laws.

“KRA needs to be aggressive, but they need to be aggressive in a way that keeps the taxpayer going,” said Nikhil Hira, a director at Bowmans, a Johannesburg-based law firm. Hira said already some businesses have been forced to shut down due to the punitive tax demands.

Karanja’s entrepreneurship journey has been paved with humiliation after humiliation, the latest of which was last August when she had to stay locked up at her office overnight as officers from the Directorate of Criminal Investigations camped outside her factory gates in Naivasha.

She would later be arrested together with her husband Joseph Karanja and taken to Muthaiga police station, where she would spend the night while her husband was released on health grounds. The couple was on August 23 arraigned and charged with tax evasion.

“I keep fighting because I have seen what I can do, what Keroche can become. I believe in my dream and I am not willing to give up on it,” she told The Standard in a past interview last week.

“We have long glorified foreign investors, but even locals can make a difference. Our brands can compete against global giants. However, we need the government to protect our businesses, not fight them.”

During the tumultuous period last year, Karanja received rare backing from Nakuru Governor Lee Kinyanjui, who faulted the manner in which the DCI and KRA had acted. The governor noted that even in its quest to meet tax collection targets, the tax agency must be balanced.

Support from the government has been rare for the local entrepreneur who has created hundreds of jobs directly and thousands indirectly for farmers, distributors and other suppliers that the firm works with. The only other memorable time she appeared to have gotten support from government was when Raila Odinga, then the prime minister, graced the launch of Summit Lager.

The launch heralded a new era for Keroche. The firm, which was formed in 1997, had been playing in the spirits and fortified wines space. It now had a beer in its stable, which Karanja noted also heralded an era for the country that for the first time the market had a beer brewed by a Kenyan investor. She noted that the consumer now also had an alternative.

When she was producing wines and fortified spirits, she had to contend with hefty tax hikes and even the firm’s depots being raided by authorities. When Keroche ventured into the beer market, she had to face bruising battles with the competition, where there were accusations and counter-accusations of breaking and even theft of beer bottles.

In a recent paid up newspaper advert, Keroche said its total turnover between June 2015 and June 2019 was Sh18.5 billion, from which it paid Sh7.2 billion in taxes.

Governor Lee Kinyanjui has been given 14 days to appoint a substantive County Executive Committee Member for Roads and Infrastructure.

By Fred Obura | 9 hours ago

By Willis Oketch and Patrick Beja | 15 hours ago