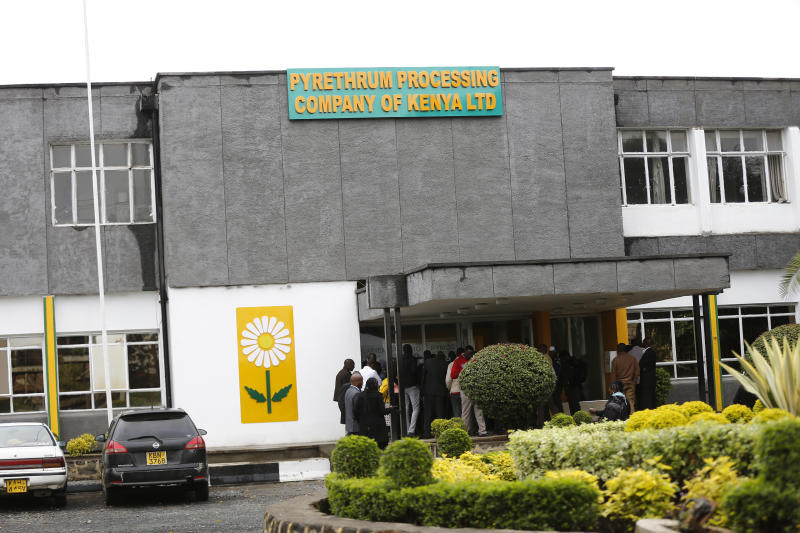 After years of pillage, mismanagement, poor leadership and waning farmers’ confidence, Pyrethrum Processing Company (PCC) is on its deathbed.

Last week’s arrest of three top managers of the company over graft allegations lifted the lid on the tainted state agency, which has not crushed a single tonne of flowers for over one year.

The arrest of senior managers over alleged economic crimes and procurement irregularities comes at a time when the corporation seems to have given up on the crop largely due to financial constraints and apathy from farmers.

The Ethics and Anti-Corruption Commission (EACC) is yet to prefer charges against three senior officials.

Last Monday all the three were each released on Sh100,000 police bond, awaiting completion of investigations.

However, Sunday Standard can reveal that the corporation, which used to produce 18,000 tonnes or over 80 per cent of world demand of pyrethrum and earned $200 million (Sh20 billion) in forex annually, is facing tough times. This reality is evident at the PCC’s factory in Nakuru’s Industrial Area, that is a relic with old, inefficient technology.

The factory, which was once the biggest in Africa, with a capacity to crush 25 tonnes of pyrethrum flowers per day and boasted a 600-tonne holding tank, is a shadow of its former self.

When we visited the factory last week, the machines were silent. This is because there was no electricity to power them on.

The Sunday Standard gathered from workers that the management has a pending Sh1.7 million electricity bill.

“The machine stopped operating almost one year ago. We used to switch them on every three months if the company management accumulated enough dry pyrethrum stocks to crush,” says George Onyango, a shop-steward at the company.

According to a plant operator, who reports to work every day just to look at the machines, the factory has to accumulate at least 100 tonnes of flowers to crush, a process that used to take a minimum of three months due to low supply by farmers.

Although the government over the years used to allocate the company cash to pay creditors, especially farmers for flowers delivered, that seems to have stopped.

The last allocation by the National Treasury was Sh300 million in financial year 2017/18.

According to a report by the Auditor General for the financial year ending June 2017, the state corporation is financially crippled due to the meager allocations.

“Things are worse because even the Sh200 million that (the firm) generates, about 80 per cent goes to expenses, a huge portion on maintaining the ageing plant,” the report reads.

Over the years, the company has been experiencing a sharp decrease in sales.

The audit revealed that the cost of sales however decreased by 16 per cent from Sh224.9 million in 2015/16 to Sh187.8 million in 2016/17, while selling and distribution costs and volume of products sold remained more or less the same over the previous year.

“Management has not explained the sharp decrease in sales without corresponding decrease in cost of sales,” reads the report.

The audit flagged a Sh455.6 million retraction plant purchased and installed in 2006 but was never commissioned.

The company reportedly purchased the machine in anticipation of an increase in flower deliveries to the factory and that it was to be commissioned in future once the factory is revived.

“Technological changes and wear and tear are bound to affect the idle machines adversely and may result in the loss of Sh455,663,000 in tax-payers’ funds invested in the assets,” stated the audit.

The collapse of the company is evident at its facilities across the country.

The Molo pyrethrum propagation centre, a 35-acre piece of land that was once the pinnacle of irrigation-based pyrethrum farming, drying and research, is lying idle with weeds taking over instead of the white, yellow and green crop that covered the land in years gone by.

Players in the sector accuse state officers who were deployed as managers and directors of the defunct Pyrethrum Board of Kenya of turning the corporation into a cash cow.

“People who destroyed the pyrethrum sector are government officials and their appointees as directors after they turned it into a cash cow and stopped paying farmers on time and at a fair price,” Pyreruthm Growers Association of Kenya Chairman Justus Monda says.

Nonpayment of salaries and wages for both permanent and contract staff has also led to massive exodus of skilled staff.

According to Onyango, the shop-steward, current staff have not received three to six months salaries.